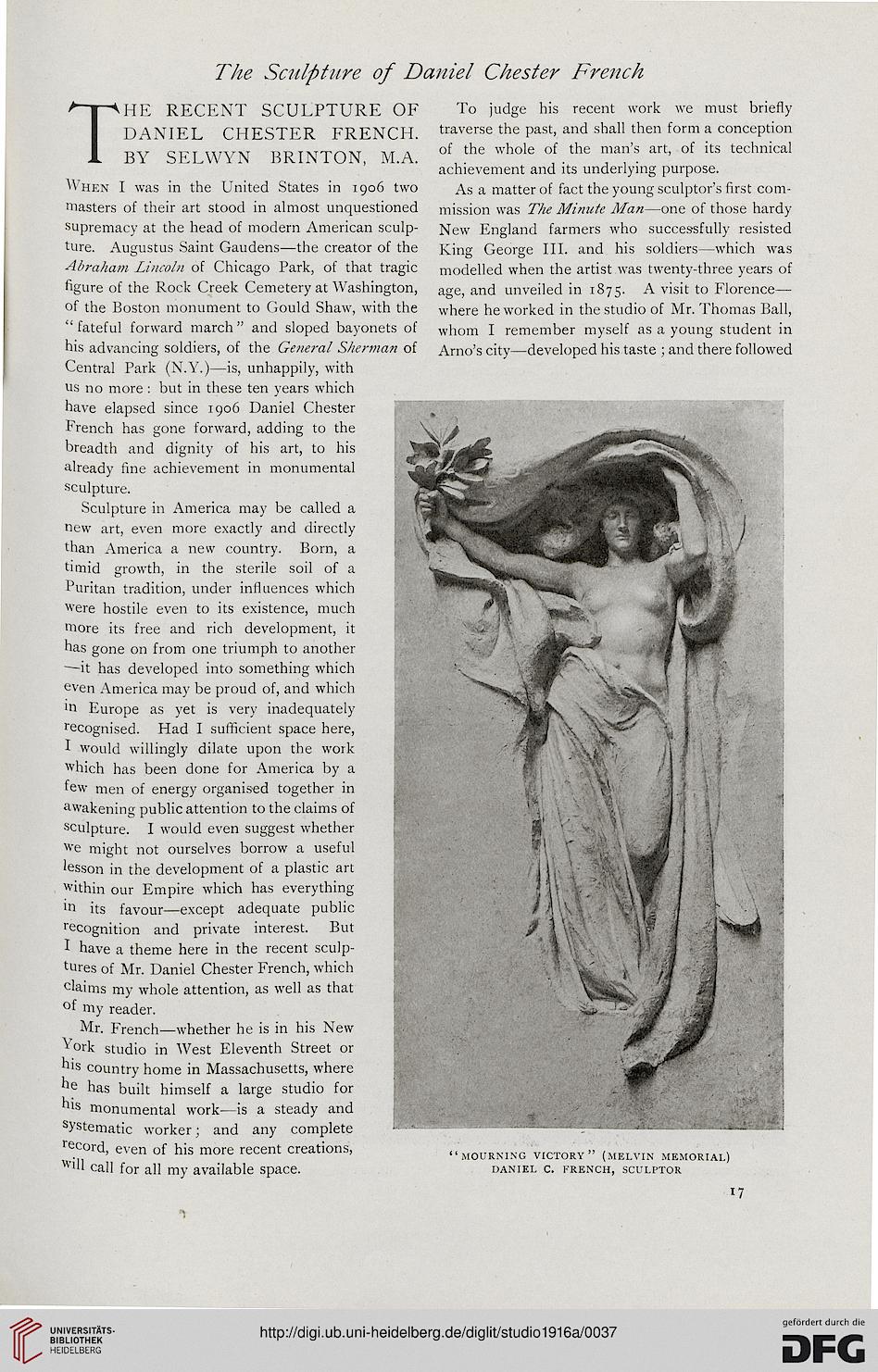 Information about OCR text
The Sculpture of Daniel Chester French

THE RECENT SCULPTURE OF To judge his recent work we must briefly
DANIEL CHESTER FRENCH traverse the past, and shall then form a conception
BY SFI WYN BRINTON MA of the whole of the man's art» of 'ts technical

achievement and its underlying purpose.
When I was in the United States in 1906 two As a matter of fact the young sculptor's first corn-
masters of their art stood in almost unquestioned mission was The Minute Man—one of those hardy
supremacy at the head of modern American sculp- New England farmers who successfully resisted
ture. Augustus Saint Gaudens—the creator of the King George III. and his soldiers—which was
Abraham Lincoln of Chicago Park, of that tragic modelled when the artist was twenty-three years of
figure of the Rock Creek Cemetery at Washington, age, and unveiled in 1875. A visit to Florence—
of the Boston monument to (iould Shaw, with the where he worked in the studio of Mr. Thomas Ball,
" fateful forward march " and sloped bayonets of whom I remember myself as a young student in
his advancing soldiers, of the General Sherman of Arno's city—developed his taste ; and there followed
Central Park (N.Y.)—is, unhappily, with
us no more : but in these ten years which
have elapsed since 1906 Daniel Chester
French has gone forward, adding to the
breadth and dignity of his art, to his
already fine achievement in monumental
sculpture.

Sculpture in America may be called a
new art, even more exactly and directly
than America a new country. Born, a
timid growth, in the sterile soil of a
I'uritan tradition, under influences which
were hostile even to its existence, much
more its free and rich development, it
has gone on from one triumph to another
'—it has developed into something which
even America may be proud of, and which
•n Europe as yet is very inadequately
recognised. Had I sufficient space here,
I would willingly dilate upon the work
which has been done for America by a
few men of energy organised together in
awakening public attention to the claims of
sculpture. I would even suggest whether
we might not ourselves borrow a useful
lesson in the development of a plastic art
within our Empire which has everything
ln its favour—except adequate public
recognition and private interest. But
I have a theme here in the recent sculp-
tures of Mr. Daniel Chester French, which
c'aims my whole attention, as well as that
of my reader.

Mr. French—whether he is in his New
^ °rk studio in West Eleventh Street or
his country home in Massachusetts, where
he has built himself a large studio for
his monumental work—is a steady and
systematic worker; and any complete

111 call for all my available space. danikl c. krench, sculptor