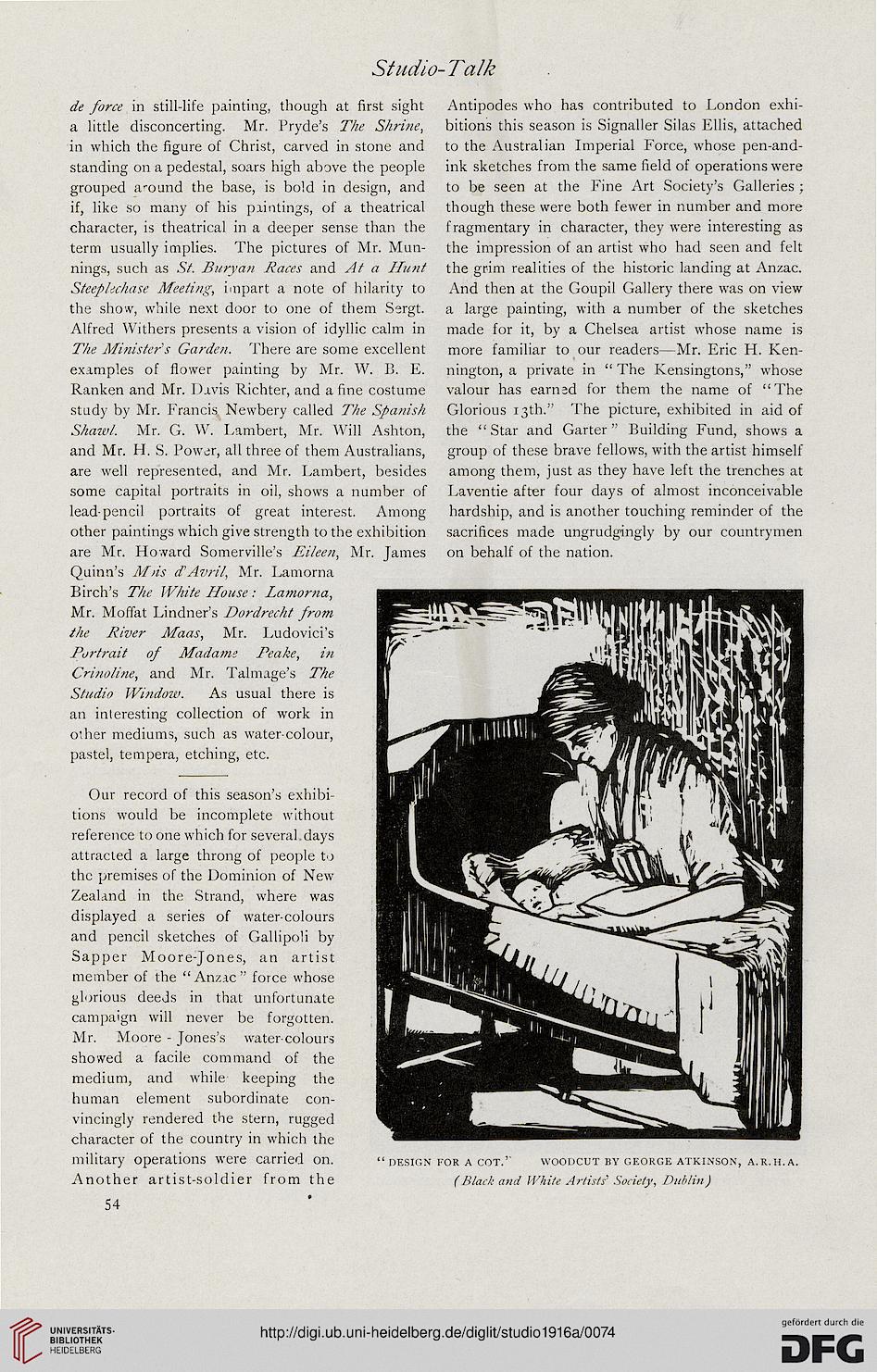 de force in still-life painting, though at first sight Antipodes who has contributed to London exhi-
a little disconcerting. Mr. Pryde's The Shrine, bitions this season is Signaller Silas Ellis, attached
in which the figure of Christ, carved in stone and to the Australian Imperial F'orce, whose pen-and-
standing on a pedestal, soars high above the people ink sketches from the same field of operations were
grouped abound the base, is bold in design, and to be seen at the Fine Art Society's Galleries ;
if, like so many of his paintings, of a theatrical though these were both fewer in number and more
character, is theatrical in a deeper sense than the fragmentary in character, they were interesting as
term usually implies. The pictures of Mr. Mun- the impression of an artist who had seen and felt
nings, such as St. Buryan Races and At a Hunt the grim realities of the historic landing at Anzac.
Steeplechase Meeting, impart a note of hilarity to And then at the Goupil Gallery there was on view
the shovv, while next door to one of them Sergt. a large painting, with a number of the sketches
Alfred Withers presents a vision of idyllic calm in made for it, by a Chelsea artist whose name is
The Minister's Garden. There are some excellent more familiar to our readers—Mr. Eric H. Ken-
examples of flower painting by Mr. W. B. E. nington, a private in " The Kensingtons," whose
Ranken and Mr. I)avis Richter, and a fine costume valour has earned for them the name of "The
study by Mr. Francis Newbery called The Spanish Glorious 13th." The picture, exhibited in aid of
Shaivl. Mr. G. W. Lambert, Mr. Will Ashton, the "Star and Garter" Building Fund, shows a
and Mr. H. S. Pow^r, all three of them Australians, group of these brave fellows, with the artist himself
are well represented, and Mr. Lambert, besides among them, just as they have left the trenches at
some capital portraits in oil, shows a number of Laventie after four days of almost inconceivable
lead-pencil portraits of great interest. Among hardship, and is another touching reminder of the
other paintings which give strength to the exhibition sacrifices made ungrudgingly by our countrymen
are Mr. Howard Somerville's Eileen, Mr. James on behalf of the nation.
Quinn's M/is d'Avril, Mr. Lamorna
Birch's The White House: Lamorna,
Mr. Moffat Lindner's Dordrecht from
the River Maas, Mr. Ludovici's
Portrait of Madam; Peake, in
Crinoline, and Mr. Talmage's The
Studio Window. As usual there is
an interesting collection of work in
other mediums, such as water-colour,
pastel, tempera, etching, etc.

Our record of this season's exhibi-
tions would be incomplete without
reference to one which for several, days
attracted a large throng of people to
the premises of the Dominion of New
Zealand in the Strand, where was
displayed a series of water-colours
and pencil sketches of Gallipoli by
Sapper Moore-Jones, an artist
member of the " Anzac " force whose
glorious deeds in that unfortunate
campaign will never be forgotten.
Mr. Moore - Jones's water colours
showed a facile command of the
medium, and while keeping the
human element subordinate con-
vincingly rendered the stern, rugged
character of the country in which the
military operations were carried on. " design for a cot.'' woodcut by george Atkinson, a.r.h. a.

Another artist-soldier from the (Black and White Artist? Society, Dublin)