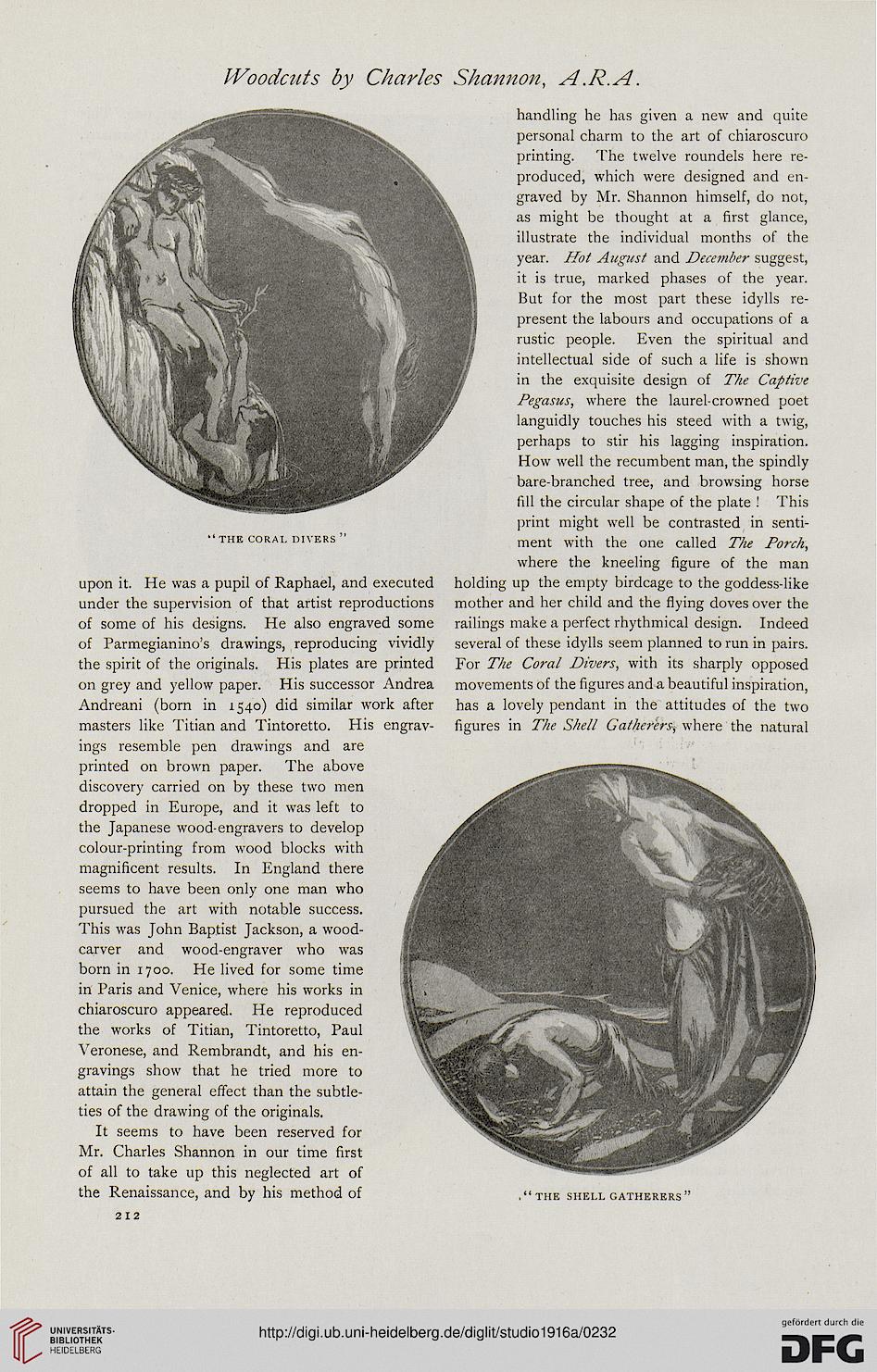 handling he has given a new and quite
personal charm to the art of chiaroscuro
printing. The twelve roundels here re-
produced, which were designed and en-
graved by Mr. Shannon himself, do not,
as might be thought at a first glance,
illustrate the individual months of the
year. Hot August and December suggest,
it is true, marked phases of the year.
But for the most part these idylls re-
present the labours and occupations of a
rustic people. Even the spiritual and
intellectual side of such a life is shown
in the exquisite design of The Captive
Pegasus, where the laurel-crowned poet
languidly touches his steed with a twig,
perhaps to stir his lagging inspiration.
How well the recumbent man, the spindly
bare-branched tree, and browsing horse
fill the circular shape of the plate ! This
print might well be contrasted in senti-
"the coral divers" ment w;th the one called The Porch,

where the kneeling figure of the man
upon it. He was a pupil of Raphael, and executed holding up the empty birdcage to the goddess-like
under the supervision of that artist reproductions mother and her child and the flying doves over the
of some of his designs. He also engraved some railings make a perfect rhythmical design. Indeed
of Parmegianino's drawings, reproducing vividly several of these idylls seem planned to run in pairs,
the spirit of the originals. His plates are printed For The Coral Divers, with its sharply opposed
on grey and yellow paper. His successor Andrea movements of the figures and a beautiful inspiration,
Andreani (born in 1540) did similar work after has a lovely pendant in the attitudes of the two
masters like Titian and Tintoretto. His engrav- figures in The Shell Gatherers^ where the natural
ings resemble pen drawings and are
printed on brown paper. The above
discovery carried on by these two men
dropped in Europe, and it was left to
the Japanese wood-engravers to develop
colour-printing from wood blocks with
magnificent results. In England there
seems to have been only one man who
pursued the art with notable success.
This was John Baptist Jackson, a wood-
carver and wood-engraver who was
born in 1700. He lived for some time
in Paris and Venice, where his works in
chiaroscuro appeared. He reproduced
the works of Titian, Tintoretto, Paul
Veronese, and Rembrandt, and his en-
gravings show that he tried more to
attain the general effect than the subtle-
ties of the drawing of the originals.

It seems to have been reserved for
Mr. Charles Shannon in our time first
of all to take up this neglected art of

the Renaissance, and by his method of ."the shell gatherers'