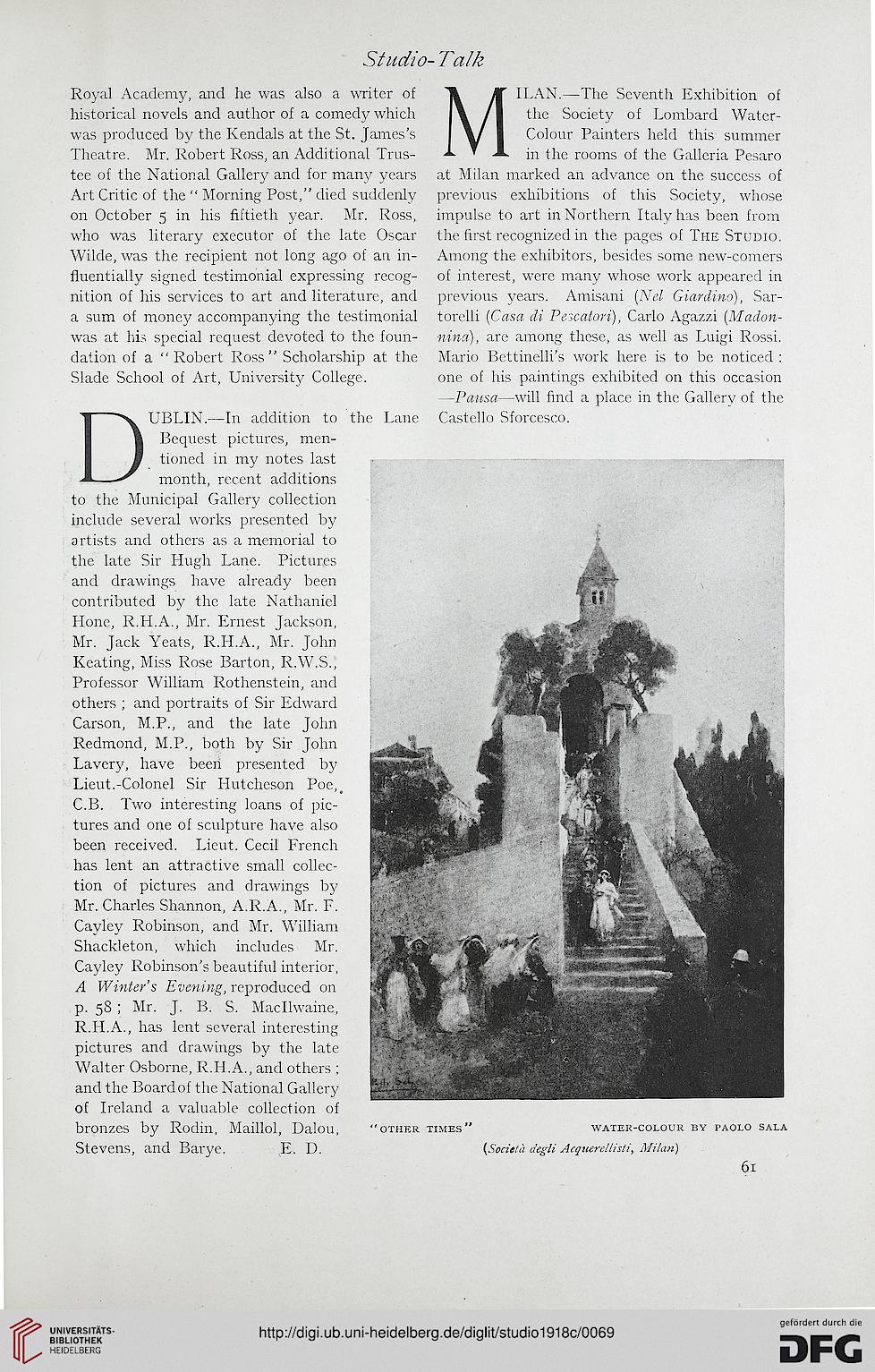 Royal Academy, and he was also a writer of 1 JT ILAN.—The Seventh Exhibition of
historical novels and author of a comedy which |\ /■ the Society of Lombard Water-

was produced by the Kendals at the St. James's I \i I Colour Painters held this summer
Theatre. Mr. Robert Ross, an Additional Trus- ^ " A in the rooms of the Galleria Pesaro
tee of the National Gallery and for many years at Milan marked an advance on the success of
Art Critic of the " Morning Post," died suddenly previous exhibitions of this Society, whose
on October 5 in his fiftieth year. Mr. Ross, impulse to art in Northern Italy has been from
who was literary executor of the late Oscar the first recognized in the pages of The Studio.
Wilde, was the recipient not long ago of an. in- Among the exhibitors, besides some new-comers
fluentially signed testimonial expressing recog- of interest, were many whose work appeared in
nition of his services to art and literature, and previous years. Amisani (Nel Giardino), Sar-
a sum of money accompanying the testimonial torelli (Casa di Pescatori), Carlo Agazzi (Madon-
was at his special request devoted to the foun- nina), are among these, as well as Luigi Rossi,
dation of a "Robert Ross" Scholarship at the Mario Bettinelli's work here is to be noticed :
Slade School of Art, University College. one of his paintings exhibited on this occasion

—Pausa—will find a place in the Gallery of the

DUBLIN.—In addition to the Lane Castello Sforcesco.
Bequest pictures, men-
tioned in my notes last
month, recent additions
to the Municipal Gallery collection
include several works presented by
artists and others as a memorial to
the late Sir Hugh Lane. Pictures
and drawings have already been
contributed by the late Nathaniel
Hone, R.H.A., Mr. Ernest Jackson,
Mr. Jack Yeats, R.H.A., Mr. John
Keating, Miss Rose Barton, R.W.S.,
Professor William Rothenstein, and
others ; and portraits of Sir Edward
Carson, M.P., and the late John
Redmond, M.P., both by Sir John
Lavery, have been presented by
Lieut.-Colonel Sir Hutcheson Poe,(
C.B. Two interesting loans of pic-
tures and one of sculpture have also
been received. Lieut. Cecil French
has lent an attractive small collec-
tion of pictures and drawings by
Mr. Charles Shannon, A.R.A., Mr. F.
Cayley Robinson, and Mr. William
Shackleton, which includes Mr.
Cayley Robinson's beautiful interior,
A Winter's Evening, reproduced on
p. 58 ; Mr. J. B. S. Macllwaine,
R.H.A., has lent several interesting
pictures and drawings by the late
Walter Osborne, R.H.A., and others ;
and the Board of the National Gallery
of Ireland a valuable collection of
bronzes by Rodin, Maillol, Dalou, "other times" water-colour by paolo sala