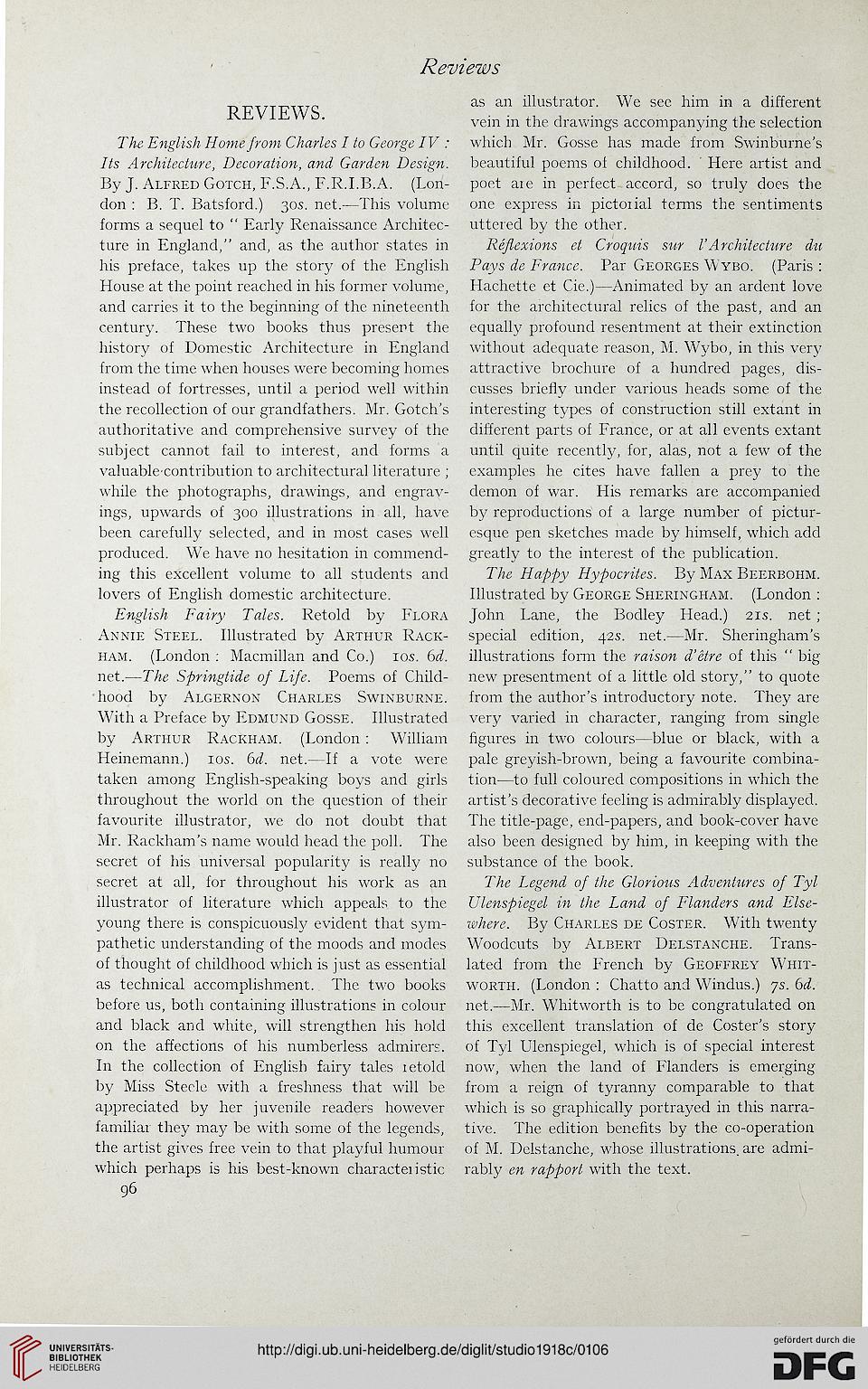 The English Home from Charles I to George IV :
Its Architecture, Decoration, and Garden Design.
By J. Alfred Gotch, F.S.A., F.R.I.B.A. (Lon-
don : B. T. Batsford.) 30s. net.—This volume
forms a sequel to " Early Renaissance Architec-
ture in England," and, as the author states in
his preface, takes up the story of the English
House at the point reached in his former volume,
and carries it to the beginning of the nineteenth
century. These two books thus present the
history of Domestic Architecture in England
from the time when houses were becoming homes
instead of fortresses, until a period well within
the recollection of our grandfathers. Mr. Gotch's
authoritative and comprehensive survey of the
subject cannot fail to interest, and forms a
valuablecontribution to architectural literature ;
while the photographs, drawings, and engrav-
ings, upwards of 300 illustrations in all, have
been carefully selected, and in most cases well
produced. We have no hesitation in commend-
ing this excellent volume to all students and
lovers of English domestic architecture.

English Fairy Tales. Retold by Flora
Annie Steel. Illustrated by Arthur Rack-
ham. (London : Macmillan and Co.) 10s. 6d.
net.—The Springtide of Life. Poems of Child-
hood by Algernon Charles Swinburne.
With a Preface by Edmund Gosse. Illustrated
by Arthur Rackham. (London : William
Heinemann.) 10s. 6d. net.—If a vote were
taken among English-speaking boys and girls
throughout the world on the question of their
favourite illustrator, we do not doubt that
Mr. Rackham's name would head the poll. The
secret of his universal popularity is really no
secret at all, for throughout his work as an
illustrator of literature which appeals to the
young there is conspicuously evident that sym-
pathetic understanding of the moods and modes
of thought of childhood which is just as essential
as technical accomplishment. The two books
before us, both containing illustrations in colour
and black and white, will strengthen his hold
on the affections of his numberless admirers.
In the collection of English fairy tales letold
by Miss Steele with a freshness that will be
appreciated by her juvenile readers however
familiar they may be with some of the legends,
the artist gives free vein to that playful humour
which perhaps is his best-known characteristic

as an illustrator. We see him in a different
vein in the drawings accompanying the selection
which Mr. Gosse has made from Swinburne's
beautiful poems of childhood. Here artist and
poet are in perfect accord, so truly does the
one express in pictoiial terms the sentiments
uttered by the other.

Reflexions et Croquis sur VArchitecture du
Pays de France. Par Georges Wybo. (Paris :
Hachette et Cie.)—Animated by an ardent love
for the architectural relics of the past, and an
equally profound resentment at their extinction
without adequate reason, M. Wybo, in this very
attractive brochure of a hundred pages, dis-
cusses briefly under various heads some of the
interesting types of construction still extant in
different parts of France, or at all events extant
until quite recently, for, alas, not a few of the
examples he cites have fallen a prey to the
demon of war. His remarks are accompanied
by reproductions of a large number of pictur-
esque pen sketches made by himself, which add
greatly to the interest of the publication.

The Happy Hypocrites. By Max Beerbohm.
Illustrated by George Sheringham. (London :
John Lane, the Bodley Head.) 21s. net;
special edition, 42s. net.—Mr. Sheringham's
illustrations form the raison d'etre of this " big
new presentment of a little old story," to quote
from the author's introductory note. They are
very varied in character, ranging from single
figures in two colours—blue or black, with a
pale greyish-brown, being a favourite combina-
tion—to full coloured compositions in which the
artist's decorative feeling is admirably displayed.
The title-page, end-papers, and book-cover have
also been designed by him, in keeping with the
substance of the book.

The Legend of the Glorious Adventures of Tyl
Ulenspiegel in the Land of Flanders and Else-
where. By Charles de Coster. With twenty
Woodcuts by Albert Delstanche. Trans-
lated from the French by Geoffrey Whit-
worth. (London : Chatto and Windus.) ys. 6d.
net.—Mr. Whit worth is to be congratulated on
this excellent translation of de Coster's story
of Tyl Ulenspiegel, which is of special interest
now, when the land of Flanders is emerging
from a reign of tyranny comparable to that
which is so graphically portrayed in this narra-
tive. The edition benefits by the co-operation
of M. Delstanche, whose illustrations, are admi-
rably en rapport with the text.