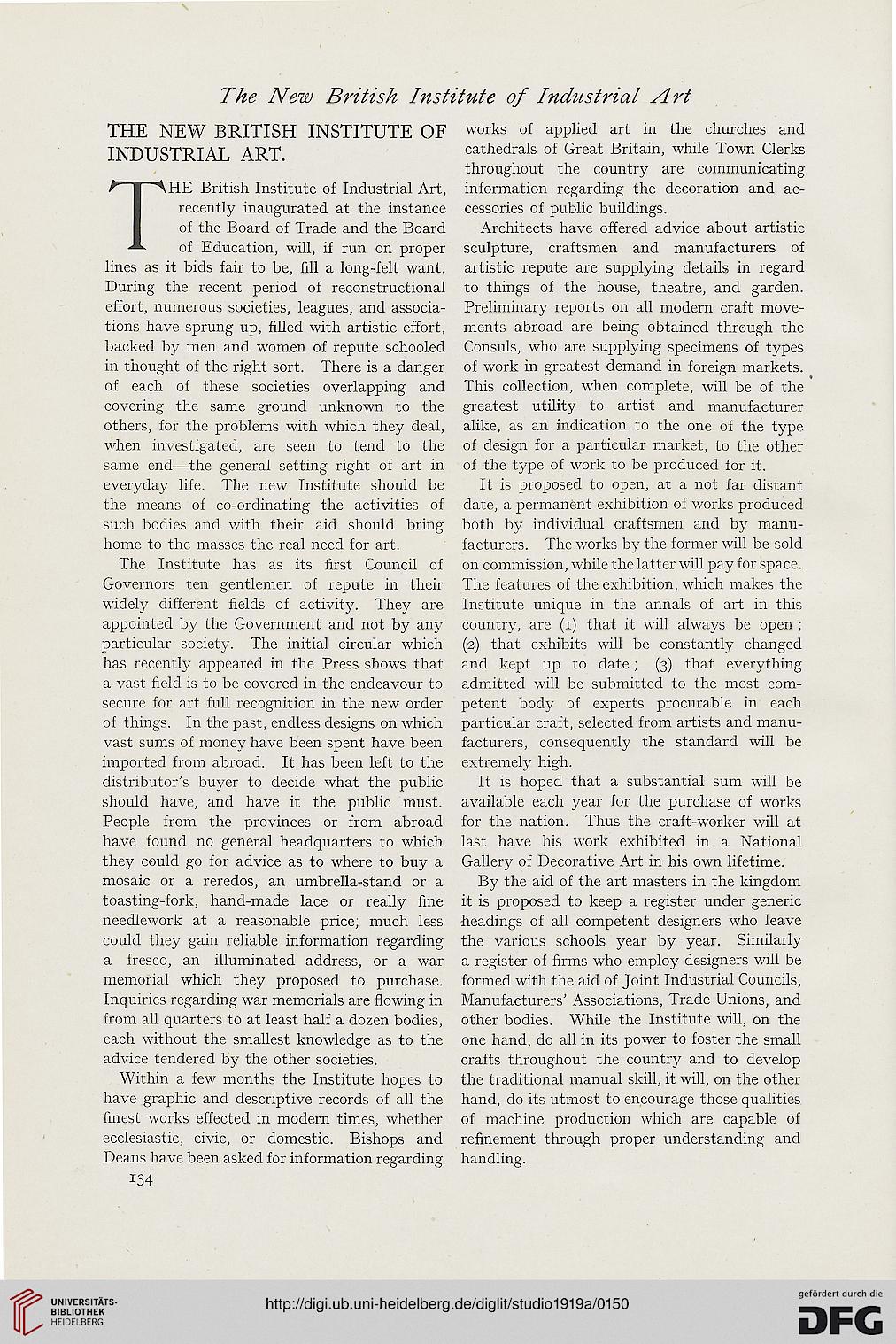 THE British Institute of Industrial Art,
recently inaugurated at the instance
of the Board of Trade and the Board
of Education, will, if run on proper
lines as it bids fair to be, fill a long-felt want.
During the recent period of reconstructional
effort, numerous societies, leagues, and associa-
tions have sprung up, filled with artistic effort,
backed by men and women of repute schooled
in thought of the right sort. There is a danger
of each of these societies overlapping and
covering the same ground unknown to the
others, for the problems with which they deal,
when investigated, are seen to tend to the
same end—the general setting right of art in
everyday life. The new Institute should be
the means of co-ordinating the activities of
such bodies and with their aid should bring
home to the masses the real need for art.

The Institute has as its first Council of
Governors ten gentlemen of repute in their
widely different fields of activity. They are
appointed by the Government and not by any
particular society. The initial circular which
has recently appeared in the Press shows that
a vast field is to be covered in the endeavour to
secure for art full recognition in the new order
of things. In the past, endless designs on which
vast sums of money have been spent have been
imported from abroad. It has been left to the
distributor's buyer to decide what the public
should have, and have it the public must.
People from the provinces or from abroad
have found no general headquarters to which
they could go for advice as to where to buy a
mosaic or a reredos, an umbrella-stand or a
toasting-fork, hand-made lace or really fine
needlework at a reasonable price, much less
could they gain reliable information regarding
a fresco, an illuminated address, or a war
memorial which they proposed to purchase.
Inquiries regarding war memorials are flowing in
from all quarters to at least half a dozen bodies,
each without the smallest knowledge as to the
advice tendered by the other societies.

Within a few months the Institute hopes to
have graphic and descriptive records of all the
finest works effected in modern times, whether
ecclesiastic, civic, or domestic. Bishops and
Deans have been asked for information regarding
134

works of applied art in the churches and
cathedrals of Great Britain, while Town Clerks
throughout the country are communicating
information regarding the decoration and ac-
cessories of public buildings.

Architects have offered advice about artistic
sculpture, craftsmen and manufacturers of
artistic repute are supplying details in regard
to things of the house, theatre, and garden.
Preliminary reports on all modern craft move-
ments abroad are being obtained through the
Consuls, who are supplying specimens of types
of work in greatest demand in foreign markets.
This collection, when complete, will be of the
greatest utility to artist and manufacturer
alike, as an indication to the one of the type,
of design for a particular market, to the other
of the type of work to be produced for it.

It is proposed to open, at a not far distant
date, a permanent exhibition of works produced
both by individual craftsmen and by manu-
facturers. The works by the former will be sold
on commission, while the latter will pay for space.
The features of the exhibition, which makes the
Institute unique in the annals of art in this
country, are (1) that it will always be open ;
(2) that exhibits will be constantly changed
and kept up to date ; (3) that everything
admitted will be submitted to the most com-
petent body of experts procurable in each
particular craft, selected from artists and manu-
facturers, consequently the standard will be
extremely high.

It is hoped that a substantial sum will be
available each year for the purchase of works
for the nation. Thus the craft-worker will at
last have his work exhibited in a National
Gallery of Decorative Art in his own lifetime.

By the aid of the art masters in the kingdom
it is proposed to keep a register under generic
headings of all competent designers who leave
the various schools year by year. Similarly
a register of firms who employ designers will be
formed with the aid of Joint Industrial Councils,
Manufacturers' Associations, Trade Unions, and
other bodies. While the Institute will, on the
one hand, do all in its power to foster the small
crafts throughout the country and to develop
the traditional manual skill, it will, on the other
hand, do its utmost to encourage those qualities
of machine production which are capable of
refinement through proper understanding and
handling.