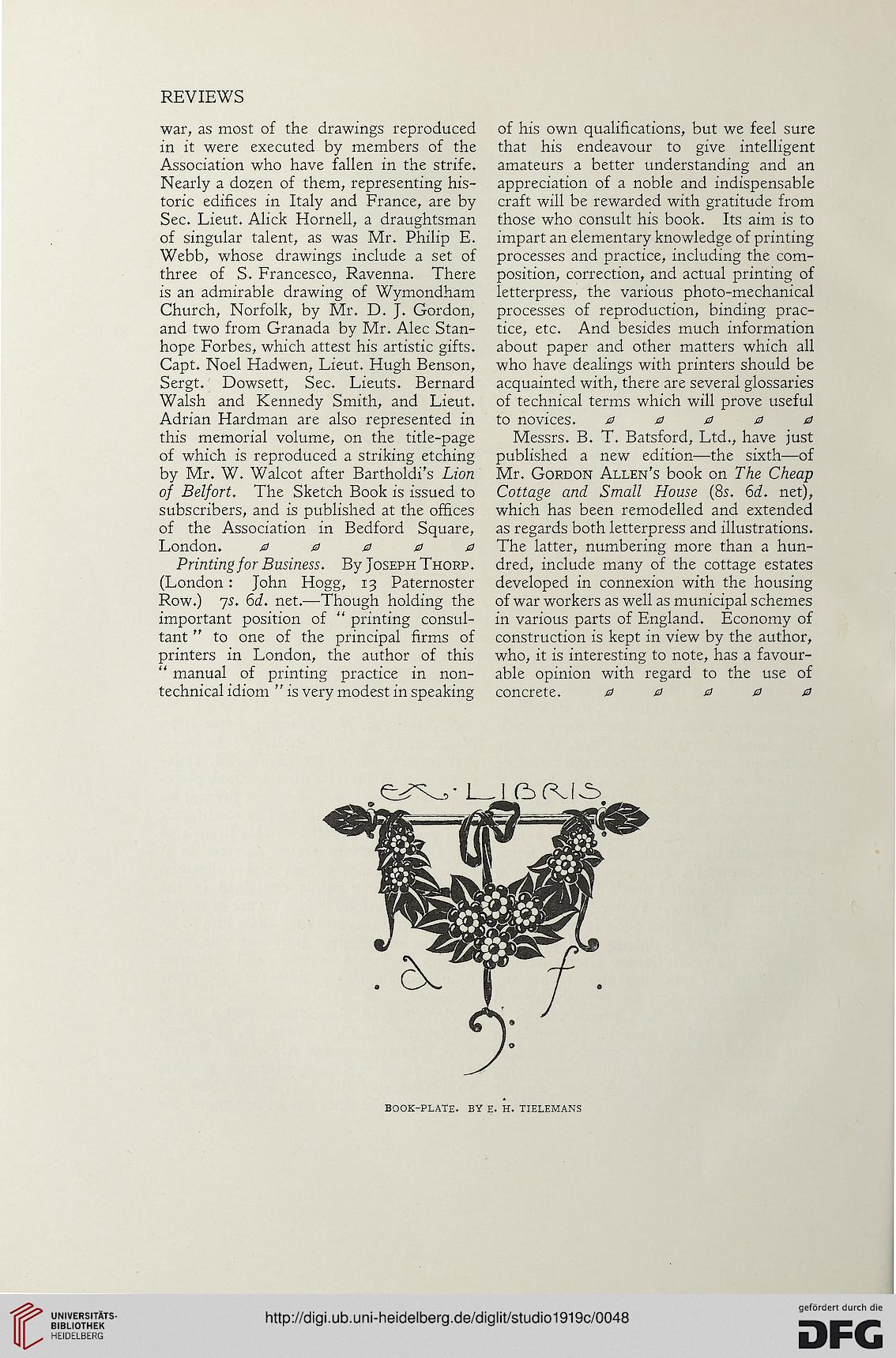 war, as most of the drawings reproduced
in it were executed by members of the
Association who have fallen in the strife.
Nearly a dozen of them, representing his-
toric edifices in Italy and France, are by
Sec. Lieut. Alick Hornell, a draughtsman
of singular talent, as was Mr. Philip E.
Webb, whose drawings include a set of
three of S. Francesco, Ravenna. There
is an admirable drawing of Wymondham
Church, Norfolk, by Mr. D. J. Gordon,
and two from Granada by Mr. Alec Stan-
hope Forbes, which attest his artistic gifts.
Capt. Noel Hadwen, Lieut. Hugh Benson,
Sergt. Dowsett, Sec. Lieuts. Bernard
Walsh and Kennedy Smith, and Lieut.
Adrian Hardman are also represented in
this memorial volume, on the title-page
of which is reproduced a striking etching
by Mr. W. Walcot after Bartholdi's Lion
of Belfort. The Sketch Book is issued to
subscribers, and is published at the offices
of the Association in Bedford Square,
London. 00000
Printing for Business. By Joseph Thorp.
(London: John Hogg, 13 Paternoster

Row.) 7s. 6d. net.—Though holding the
important position of ** printing consul-
tant ” to one of the principal firms of
printers in London, the author of this
u manual of printing practice in non-
technical idiom '' is very modest in speaking

of his own qualifications, but we feel sure
that his endeavour to give intelligent
amateurs a better understanding and an
appreciation of a noble and indispensable
craft will be rewarded with gratitude from
those who consult his book. Its aim is to
impart an elementary knowledge of printing
processes and practice, including the com-
position, correction, and actual printing of
letterpress, the various photo-mechanical
processes of reproduction, binding prac-
tice, etc. And besides much information
about paper and other matters which all
who have dealings with printers should be
acquainted with, there are several glossaries
of technical terms which will prove useful
to novices. 00000
Messrs. B. T. Batsford, Ltd., have just
published a new edition—the sixth—of
Mr. Gordon Allen's book on The Cheap
Cottage and Small House (8s. 6d. net),
which has been remodelled and extended
as regards both letterpress and illustrations.
The latter, numbering more than a hun-
dred, include many of the cottage estates
developed in connexion with the housing
of war workers as well as municipal schemes
in various parts of England. Economy of
construction is kept in view by the author,
who, it is interesting to note, has a favour-
able opinion with regard to the use of
concrete. 00000