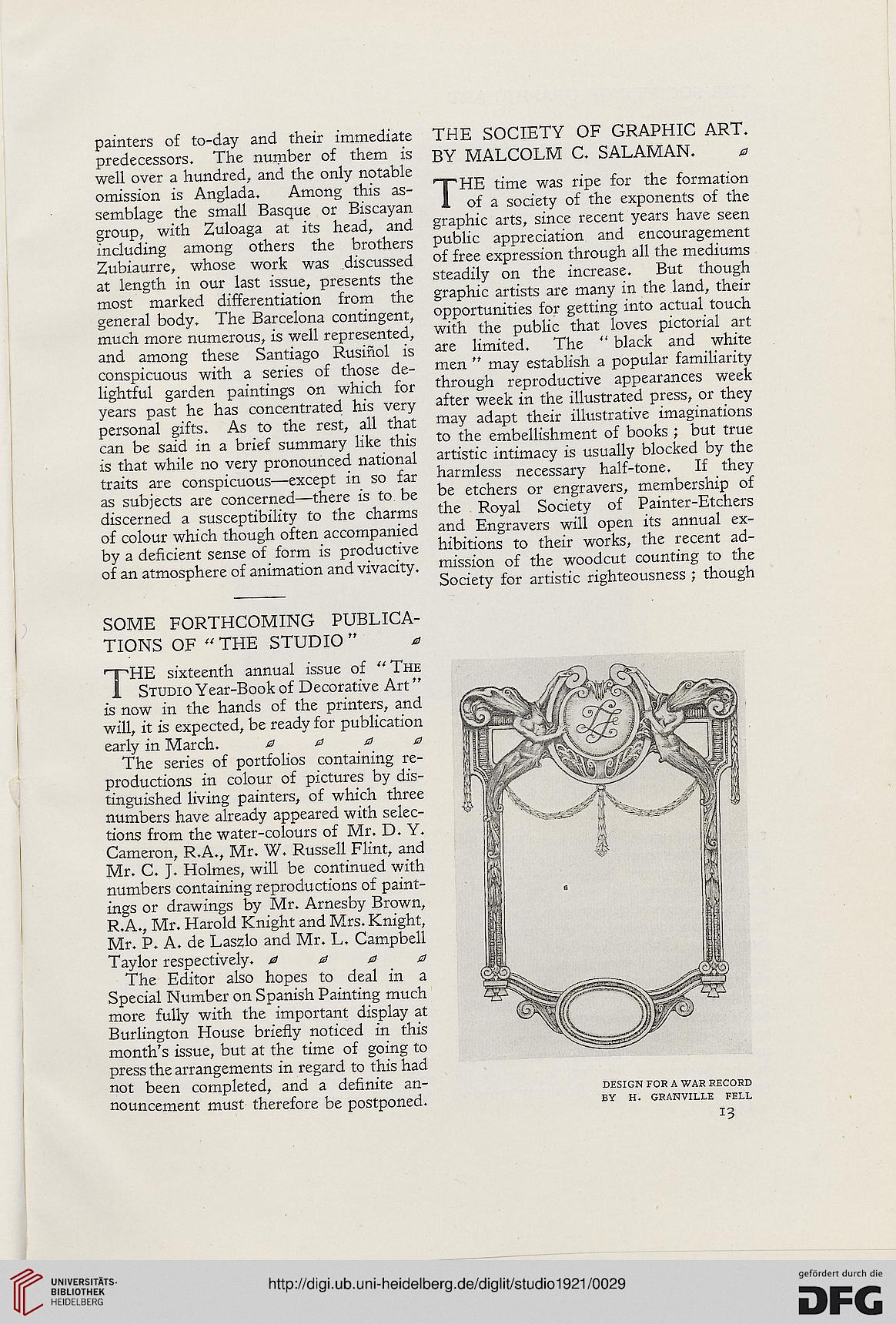 Hinweise zum OCR-Text
painters of to-day and their immediate
predecessors. The number of them is
well over a hundred, and the only notable
omission is Anglada. Among this as-
semblage the small Basque or Biscayan
group, with Zuloaga at its head, and
including among others the brothers
Zubiaurre, whose work was discussed
at length in our last issue, presents the
most marked differentiation from the
general body. The Barcelona contingent,
much more numerous, is well represented,
and among these Santiago Rusinol is
conspicuous with a series of those de-
lightful garden paintings on which for
years past he has concentrated his very
personal gifts. As to the rest, all that
can be said in a brief summary like this
is that while no very pronounced national
traits are conspicuous—except in so far
as subjects are concerned—there is to be
discerned a susceptibility to the charms
of colour which though often accompanied
by a deficient sense of form is productive
of an atmosphere of animation and vivacity.

SOME FORTHCOMING PUBLICA-
TIONS OF "THE STUDIO" 0

THE sixteenth annual issue of "The
Studio Year-Book of Decorative Art"
is now in the hands of the printers, and
will, it is expected, be ready for publication
early in March. 0000
The series of portfolios containing re-
productions in colour of pictures by dis-
tinguished living painters, of which three
numbers have already appeared with selec-
tions from the water-colours of Mr. D. Y.
Cameron, R.A., Mr. W. Russell Flint, and
Mr. C. J. Holmes, will be continued with
numbers containing reproductions of paint-
ings or drawings by Mr. Arnesby Brown,
R.A., Mr. Harold Knight and Mrs. Knight,
Mr. P. A. de Laszlo and Mr. L. Campbell
Taylor respectively. 0000
The Editor also hopes to deal in a
Special Number on Spanish Painting much
more fully with the important display at
Burlington House briefly noticed in this
month's issue, but at the time of going to
press the arrangements in regard to this had
not been completed, and a definite an-
nouncement must therefore be postponed.

THE SOCIETY OF GRAPHIC ART.
BY MALCOLM C. SALAMAN. 0

THE time was ripe for the formation
of a society of the exponents of the
graphic arts, since recent years have seen
public appreciation and encouragement
of free expression through all the mediums
steadily on the increase. But though
graphic artists are many in the land, their
opportunities for getting into actual touch
with the public that loves pictorial art
are limited. The " black and white
men " may establish a popular familiarity
through reproductive appearances week
after week in the illustrated press, or they
may adapt their illustrative imaginations
to the embellishment of books ; but true
artistic intimacy is usually blocked by the
harmless necessary half-tone. If they
be etchers or engravers, membership of
the Royal Society of Painter-Etchers
and Engravers will open its annual ex-
hibitions to their works, the recent ad-
mission of the woodcut counting to the
Society for artistic righteousness ; though

DESIGN FOR A WAR RECORD
BY H. GRANVILLE FELL