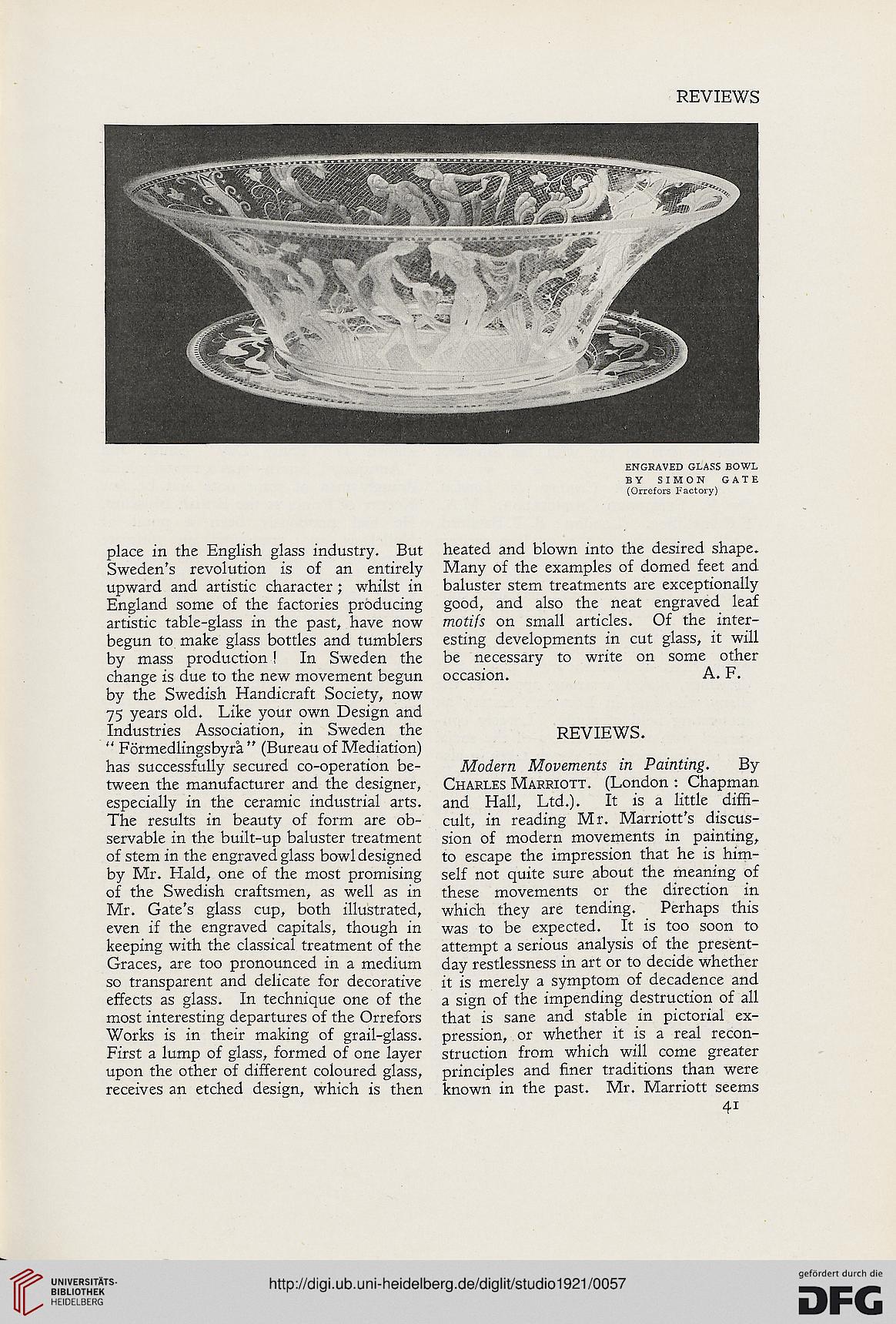 place in the English glass industry. But
Sweden's revolution is of an entirely
upward and artistic character ; whilst in
England some of the factories producing
artistic table-glass in the past, have now
begun to make glass bottles and tumblers
by mass production! In Sweden the
change is due to the new movement begun
by the Swedish Handicraft Society, now
75 years old. Like your own Design and
Industries Association, in Sweden the
" Formedlingsbyra " (Bureau of Mediation)
has successfully secured co-operation be-
tween the manufacturer and the designer,
especially in the ceramic industrial arts.
The results in beauty of form are ob-
servable in the built-up baluster treatment
of stem in the engraved glass bowl designed
by Mr. Hald, one of the most promising
of the Swedish craftsmen, as well as in
Mr. Gate's glass cup, both illustrated,
even if the engraved capitals, though in
keeping with the classical treatment of the
Graces, are too pronounced in a medium
so transparent and delicate for decorative
effects as glass. In technique one of the
most interesting departures of the Orrefors
Works is in their making of grail-glass.
First a lump of glass, formed of one layer
upon the other of different coloured glass,
receives an etched design, which is then

heated and blown into the desired shape.
Many of the examples of domed feet and
baluster stem treatments are exceptionally
good, and also the neat engraved leaf
motifs on small articles. Of the inter-
esting developments in cut glass, it will
be necessary to write on some other
occasion. A. F.

Modern Movements in Painting. By
Charles Marriott. (London : Chapman
and Hall, Ltd.). It is a little diffi-
cult, in reading Mr. Marriott's discus-
sion of modern movements in painting,
to escape the impression that he is him-
self not quite sure about the meaning of
these movements or the direction in
which they are tending. Perhaps this
was to be expected. It is too soon to
attempt a serious analysis of the present-
day restlessness in art or to decide whether
it is merely a symptom of decadence and
a sign of the impending destruction of all
that is sane and stable in pictorial ex-
pression, or whether it is a real recon-
struction from which will come greater
principles and finer traditions than were
known in the past. Mr. Marriott seems