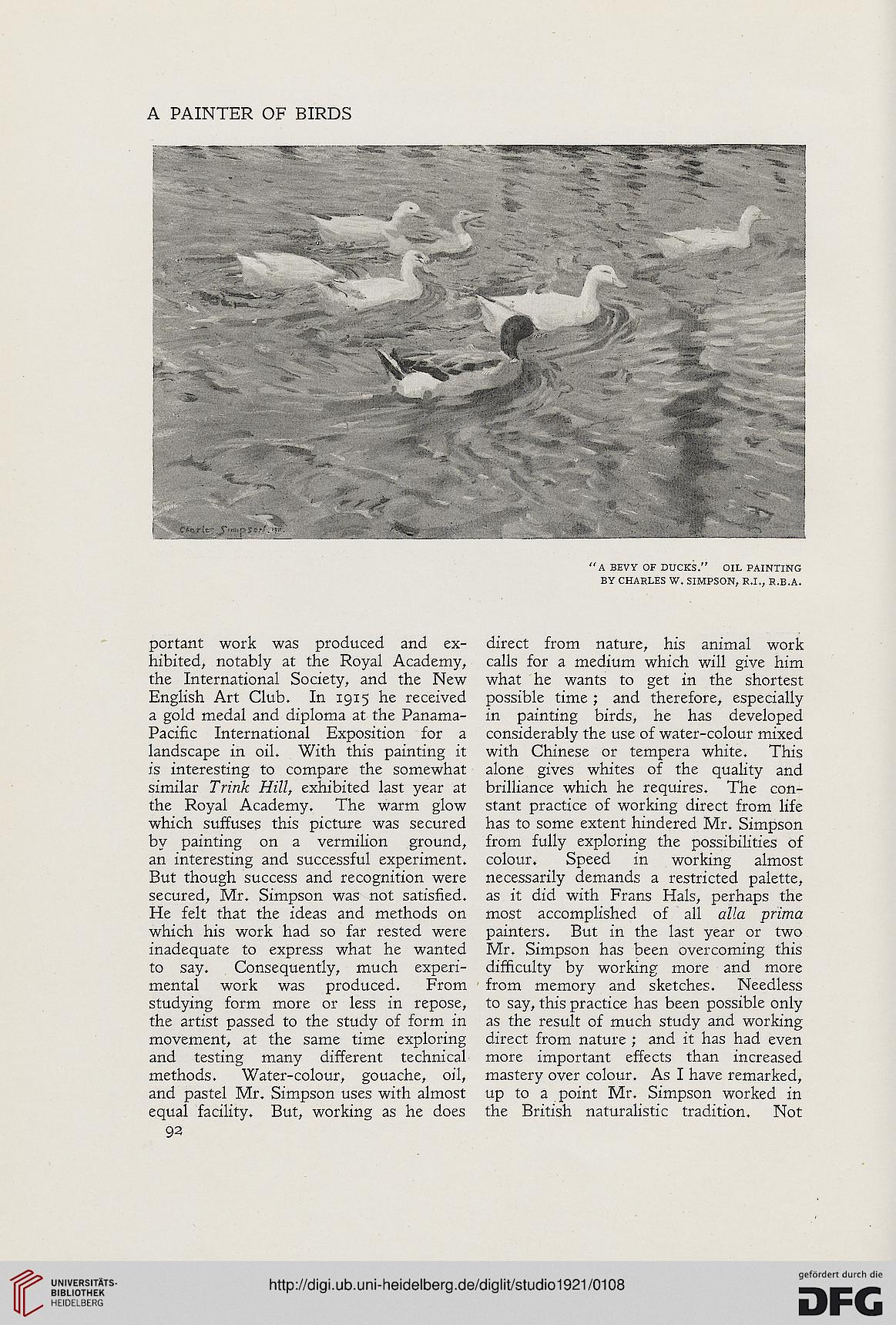 Information about OCR text
A PAINTER OF BIRDS

portant work was produced and ex-
hibited, notably at the Royal Academy,
the International Society, and the New
English Art Club. In 1915 he received
a gold medal and diploma at the Panama-
Pacific International Exposition for a
landscape in oil. With this painting it
is interesting to compare the somewhat
similar Trink Hill, exhibited last year at
the Royal Academy. The warm glow
which suffuses this picture was secured
by painting on a vermilion ground,
an interesting and successful experiment.
But though success and recognition were
secured, Mr. Simpson was not satisfied.
He felt that the ideas and methods on
which his work had so far rested were
inadequate to express what he wanted
to say. Consequently, much experi-
mental work was produced. From
studying form more or less in repose,
the artist passed to the study of form in
movement, at the same time exploring
and testing many different technical
methods. Water-colour, gouache, oil,
and pastel Mr. Simpson uses with almost
equal facility. But, working as he does
92

direct from nature, his animal work
calls for a medium which will give him
what he wants to get in the shortest
possible time ; and therefore, especially
in painting birds, he has developed
considerably the use of water-colour mixed
with Chinese or tempera white. This
alone gives whites of the quality and
brilliance which he requires. The con-
stant practice of working direct from life
has to some extent hindered Mr. Simpson
from fully exploring the possibilities of
colour. Speed in working almost
necessarily demands a restricted palette,
as it did with Frans Hals, perhaps the
most accomplished of all alia prima
painters. But in the last year or two
Mr, Simpson has been overcoming this
difficulty by working more and more
from memory and sketches. Needless
to say, this practice has been possible only
as the result of much study and working
direct from nature ; and it has had even
more important effects than increased
mastery over colour. As I have remarked,
up to a point Mr. Simpson worked in
the British naturalistic tradition. Not