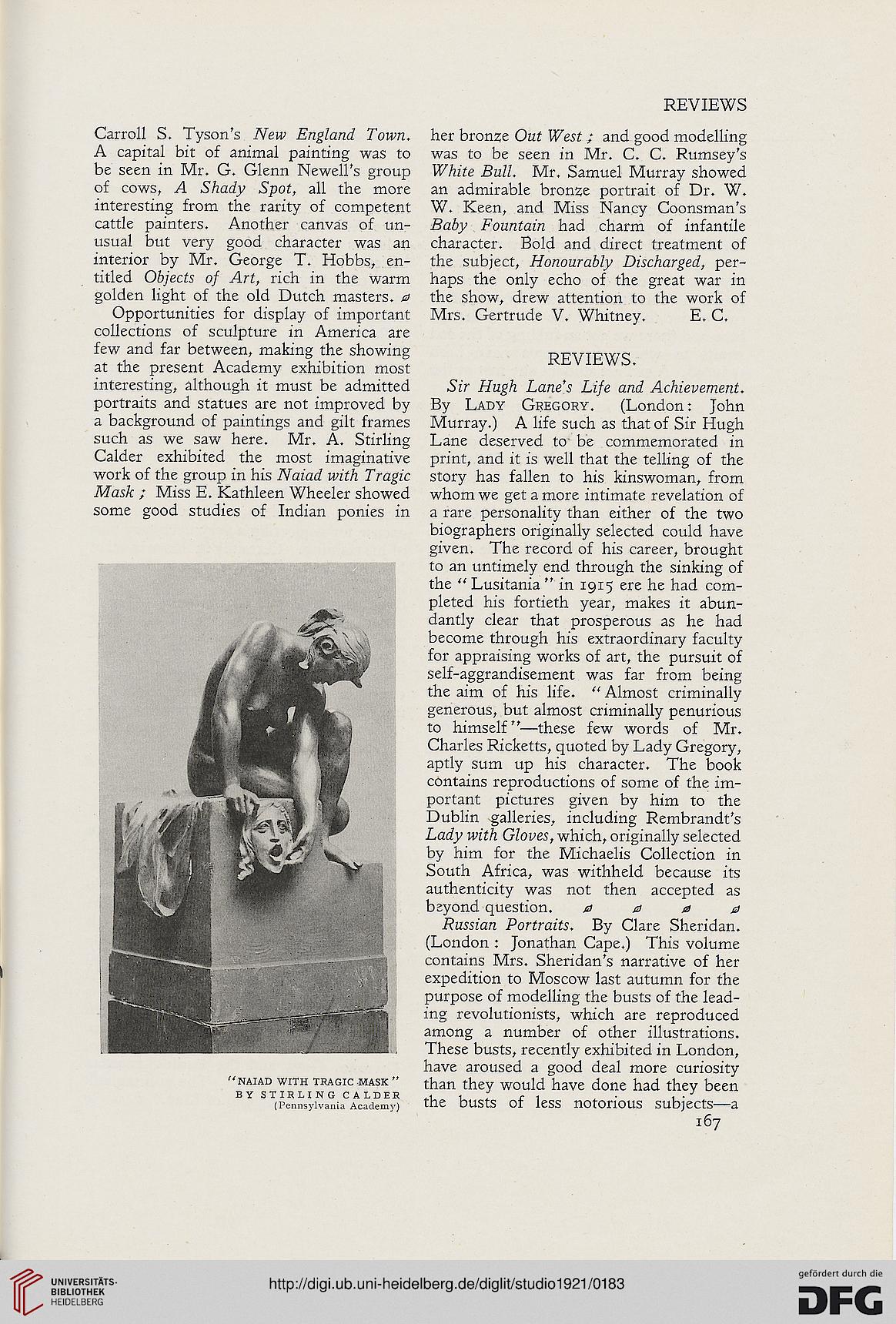 Carroll S. Tyson's New England Town,
A capital bit of animal painting was to
be seen in Mr. G. Glenn Newell's group
of cows, A Shady Spot, all the more
interesting from the rarity of competent
cattle painters. Another canvas of un-
usual but very good character was an
interior by Mr. George T. Hobbs, en-
titled Objects of Art, rich in the warm
golden light of the old Dutch masters, a
Opportunities for display of important
collections of sculpture in America are
few and far between, making the showing
at the present Academy exhibition most
interesting, although it must be admitted
portraits and statues are not improved by
a background of paintings and gilt frames
such as we saw here. Mr. A. Stirling
Calder exhibited the most imaginative
work of the group in his Naiad with Tragic
Mask ; Miss E. Kathleen Wheeler showed
some good studies of Indian ponies in

her bronze Out West ; and good modelling
was to be seen in Mr. C. C. Rumsey's
White Bull. Mr. Samuel Murray showed
an admirable bronze portrait of Dr. W.
W. Keen, and Miss Nancy Coonsman's
Baby Fountain had charm of infantile
character. Bold and direct treatment of
the subject, Honourably Discharged, per-
haps the only echo of the great war in
the show, drew attention to the work of
Mrs. Gertrude V. Whitney. E. C.

Sir Hugh Lane's Life and Achievement.
By Lady Gregory. (London: John
Murray.) A life such as that of Sir Hugh
Lane deserved to be commemorated in
print, and it is well that the telling of the
story has fallen to his kinswoman, from
whom we get a more intimate revelation of
a rare personality than either of the two
biographers originally selected could have
given. The record of his career, brought
to an untimely end through the sinking of
the " Lusitania " in 1915 ere he had com-
pleted his fortieth year, makes it abun-
dantly clear that prosperous as he had
become through his extraordinary faculty
for appraising works of art, the pursuit of
self-aggrandisement was far from being
the aim of his life. " Almost criminally
generous, but almost criminally penurious
to himself"—these few words of Mr.
Charles Ricketts, quoted by Lady Gregory,
aptly sum up his character. The book
contains reproductions of some of the im-
portant pictures given by him to the
Dublin galleries, including Rembrandt's
Lady with Gloves, which, originally selected
by him for the Michaelis Collection in
South Africa, was withheld because its
authenticity was not then accepted as
beyond question. a a a t>

Russian Portraits. By Clare Sheridan.
(London : Jonathan Cape.) This volume
contains Mrs. Sheridan's narrative of her
expedition to Moscow last autumn for the
purpose of modelling the busts of the lead-
ing revolutionists, which are reproduced
among a number of other illustrations.
These busts, recently exhibited in London,
have aroused a good deal more curiosity
than they would have done had they been
the busts of less notorious subjects—a