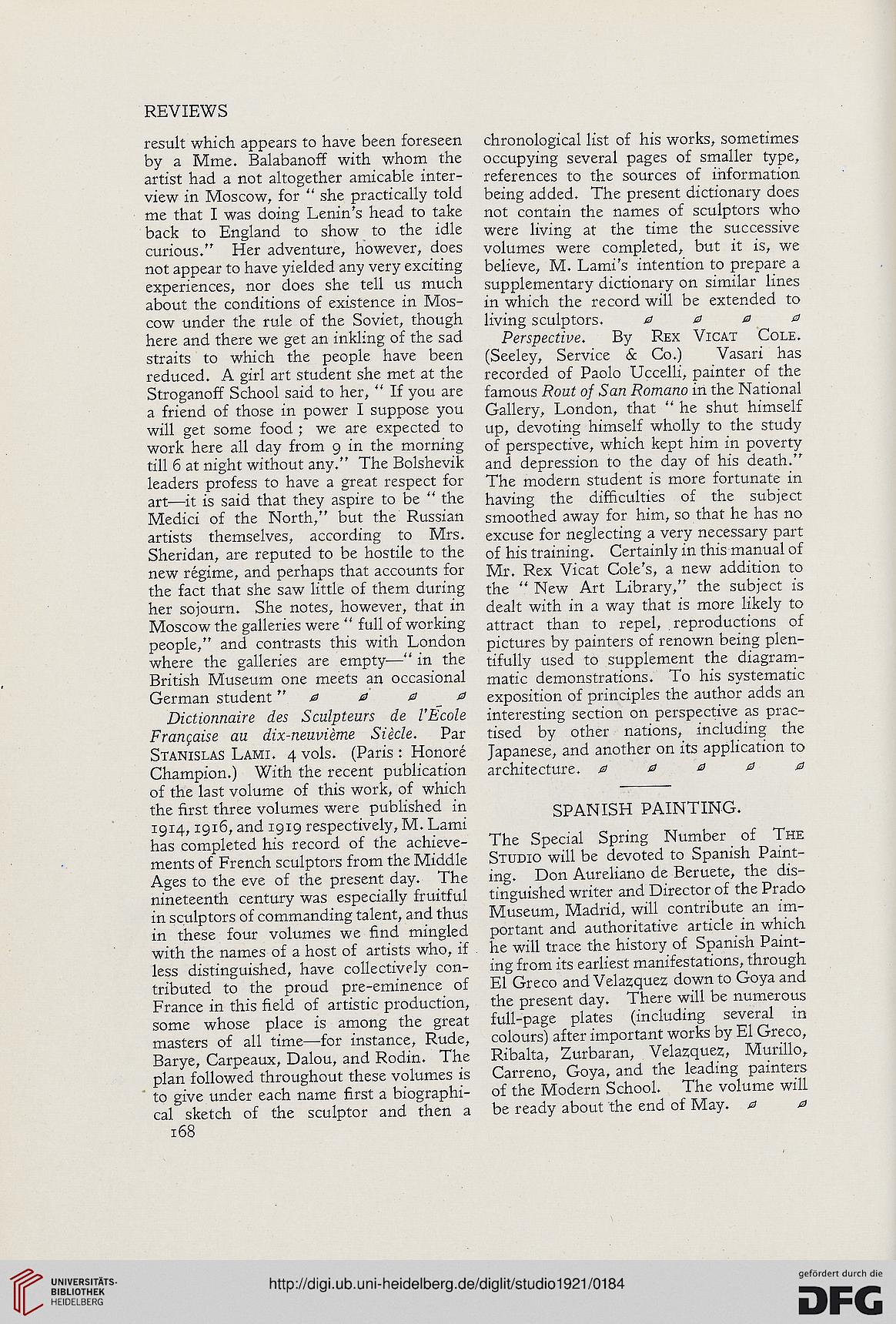 result which appears to have been foreseen
by a Mme. Balabanoff with whom the
artist had a not altogether amicable inter-
view in Moscow, for " she practically told
me that I was doing Lenin's head to take
back to England to show to the idle
curious." Her adventure, however, does
not appear to have yielded any very exciting
experiences, nor does she tell us much
about the conditions of existence in Mos-
cow under the rule of the Soviet, though
here and there we get an inkling of the sad
straits to which the people have been
reduced. A girl art student she met at the
Stroganoff School said to her, " If you are
a friend of those in power I suppose you
will get some food ; we are expected to
work here all day from 9 in the morning
till 6 at night without any." The Bolshevik
leaders profess to have a great respect for
art—it is said that they aspire to be " the
Medici of the North," but the Russian
artists themselves, according to Mrs.
Sheridan, are reputed to be hostile to the
new regime, and perhaps that accounts for
the fact that she saw little of them during
her sojourn. She notes, however, that in
Moscow the galleries were " full of working
people," and contrasts this with London
where the galleries are empty—" in the
British Museum one meets an occasional
German student" 0 00 0

Dictionnaire des Sculpteurs de I'Ecole
Francaise au dix-neuvieme Steele, Par
Stanislas Lami. 4 vols. (Paris : Honore
Champion.) With the recent publication
of the last volume of this work, of which
the first three volumes were published in
1914,1916, and 1919 respectively, M. Lami
has completed his record of the achieve-
ments of French sculptors from the Middle
Ages to the eve of the present day. The
nineteenth century was especially fruitful
in sculptors of commanding talent, and thus
in these four volumes we find mingled
with the names of a host of artists who, if
less distinguished, have collectively con-
tributed to the proud pre-eminence of
France in this field of artistic production,
some whose place is among the great
masters of all time—for instance, Rude,
Barye, Carpeaux, Dalou, and Rodin. The
plan followed throughout these volumes is
to give under each name first a biographi-
cal sketch of the sculptor and then a

chronological list of his works, sometimes
occupying several pages of smaller type,
references to the sources of information
being added. The present dictionary does
not contain the names of sculptors who
were living at the time the successive
volumes were completed, but it is, we
believe, M. Lami's intention to prepare a
supplementary dictionary on similar lines
in which the record will be extended to
living sculptors. 0000
Perspective. By Rex Vicat Cole.
(Seeley, Service & Co.) Vasari has
recorded of Paolo Uccelli, painter of the
famous Rout of San Romano in the National
Gallery, London, that " he shut himself
up, devoting himself wholly to the study
of perspective, which kept him in poverty
and depression to the day of his death."
The modern student is more fortunate in
having the difficulties of the subject
smoothed away for him, so that he has no
excuse for neglecting a very necessary part
of his training. Certainly in this manual of
Mr. Rex Vicat Cole's, a new addition to
the " New Art Library," the subject is
dealt with in a way that is more likely to
attract than to repel, reproductions of
pictures by painters of renown being plen-
tifully used to supplement the diagram-
matic demonstrations. To his systematic
exposition of principles the author adds an
interesting section on perspective as prac-
tised by other nations, including the
Japanese, and another on its application to
architecture. 00000

The Special Spring Number of The
Studio will be devoted to Spanish Paint-
ing. Don Aureliano de Beruete, the dis-
tinguished writer and Director of the Prado
Museum, Madrid, will contribute an im-
portant and authoritative article in which
he will trace the history of Spanish Paint-
ing from its earliest manifestations, through
El Greco and Velazquez down to Goya and
the present day. There will be numerous
full-page plates (including several in
colours) after important works by El Greco,
Ribalta, Zurbaran, Velazquez, Murillo,
Carreno, Goya, and the leading painters
of the Modern School. The volume will
be ready about the end of May. 0 0