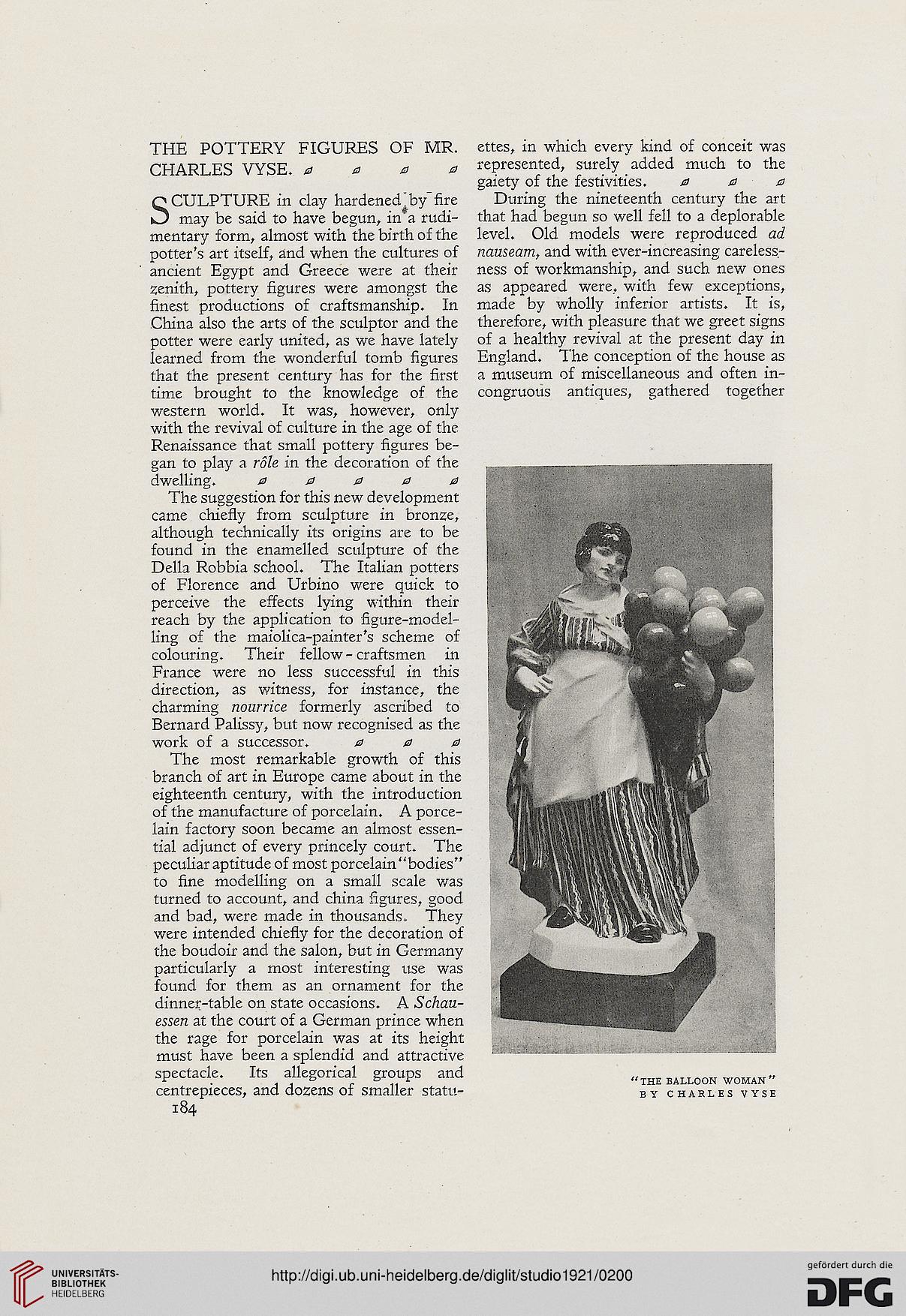 SCULPTURE in clay hardened^by'fire
may be said to have begun, in a rudi-
mentary form, almost with the birth of the
potter's art itself, and when the cultures of
ancient Egypt and Greece were at their
zenith, pottery figures were amongst the
finest productions of craftsmanship. In
China also the arts of the sculptor and the
potter were early united, as we have lately
learned from the wonderful tomb figures
that the present century has for the first
time brought to the knowledge of the
western world. It was, however, only
with the revival of culture in the age of the
Renaissance that small pottery figures be-
gan to play a role in the decoration of the
dwelling. 00000
The suggestion for this new development
came chiefly from sculpture in bronze,
although technically its origins are to be
found in the enamelled sculpture of the
Delia Robbia school. The Italian potters
of Florence and Urbino were quick to
perceive the effects lying within their
reach by the application to figure-model-
ling of the maiolica-painter's scheme of
colouring. Their fellow - craftsmen in
France were no less successful in this
direction, as witness, for instance, the
charming nourrice formerly ascribed to
Bernard Palissy, but now recognised as the
work of a successor. 000
The most remarkable growth of this
branch of art in Europe came about in the
eighteenth century, with the introduction
of the manufacture of porcelain. A porce-
lain factory soon became an almost essen-
tial adjunct of every princely court. The
peculiar aptitude of most porcelain "bodies"
to fine modelling on a small scale was
turned to account, and china figures, good
and bad, were made in thousands. They
were intended chiefly for the decoration of
the boudoir and the salon, but in Germany
particularly a most interesting use was
found for them as an ornament for the
dinner-table on state occasions. A Schau-
essen at the court of a German prince when
the rage for porcelain was at its height
must have been a splendid and attractive
spectacle. Its allegorical groups and
centrepieces, and dozens of smaller statu-
184

ettes, in which every kind of conceit was
represented, surely added much to the
gaiety of the festivities. 000
During the nineteenth century the art
that had begun so well fell to a deplorable
level. Old models were reproduced ad
nauseam, and with ever-increasing careless-
ness of workmanship, and such new ones
as appeared were, with few exceptions,
made by wholly inferior artists. It is,
therefore, with pleasure that we greet signs
of a healthy revival at the present day in
England. The conception of the house as
a museum of miscellaneous and often in-
congruous antiques, gathered together

"THE BALLOON WOMAN"
BY CHARLES VYSE