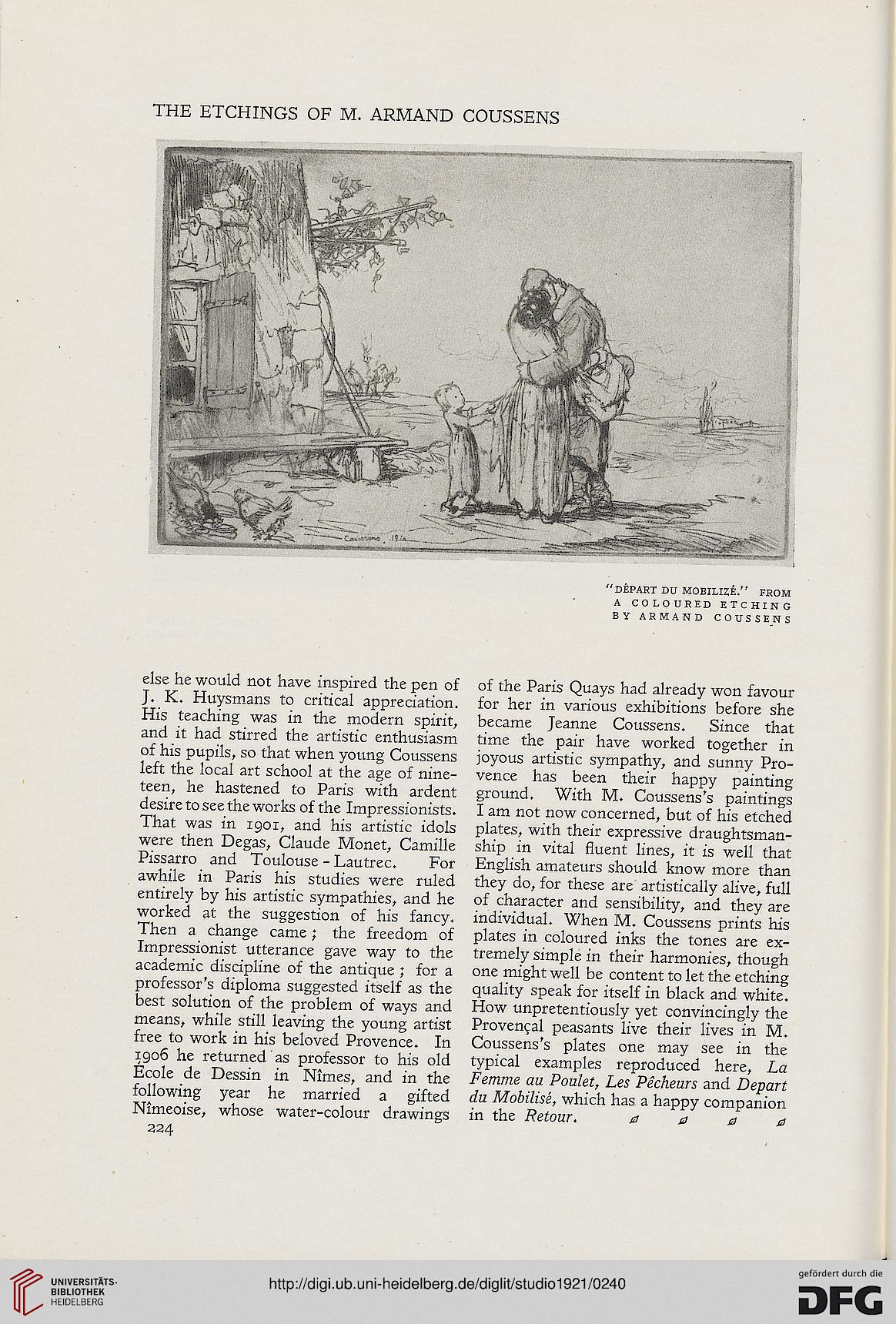 Information about OCR text
THE ETCHINGS OF M. ARMAND COUSSENS

"DEPART DU MOBILIZE." FROM
A COLOURED ETCHING
BY ARMAND COUSSENS

else he would not have inspired the pen of
J. K. Huysmans to critical appreciation.
His teaching was in the modern spirit,
and it had stirred the artistic enthusiasm
of his pupils, so that when young Coussens
left the local art school at the age of nine-
teen, he hastened to Paris with ardent
desire to see the works of the Impressionists.
That was in 1901, and his artistic idols
were then Degas, Claude Monet, Camille
Pissarro and Toulouse - Lautrec. For
awhile in Paris his studies were ruled
entirely by his artistic sympathies, and he
worked at the suggestion of his fancy.
Then a change came; the freedom of
Impressionist utterance gave way to the
academic discipline of the antique ; for a
professor's diploma suggested itself as the
best solution of the problem of ways and
means, while still leaving the young artist
free to work in his beloved Provence* In
1906 he returned as professor to his old
Ecole de Dessin in Nimes, and in the
following year he married a gifted
Nimeoise, whose water-colour drawings
224

of the Paris Quays had already won favour
for her in various exhibitions before she
became Jeanne Coussens. Since that
time the pair have worked together in
joyous artistic sympathy, and sunny Pro-
vence has been their happy painting
ground. With M. Coussens's paintings
I am not now concerned, but of his etched
plates, with their expressive draughtsman-
ship in vital fluent lines, it is well that
English amateurs should know more than
they do, for these are artistically alive, full
of character and sensibility, and they are
individual. When M. Coussens prints his
plates in coloured inks the tones are ex-
tremely simple in their harmonies, though
one might well be content to let the etching
quality speak for itself in black and white.
How unpretentiously yet convincingly the
Provencal peasants live their lives in M.
Coussens's plates one may see in the
typical examples reproduced here, La
Femme au Poulet, Les Pecheurs and Depart
du Mobilise, which has a happy companion
in the Retour. 0 0 0 0