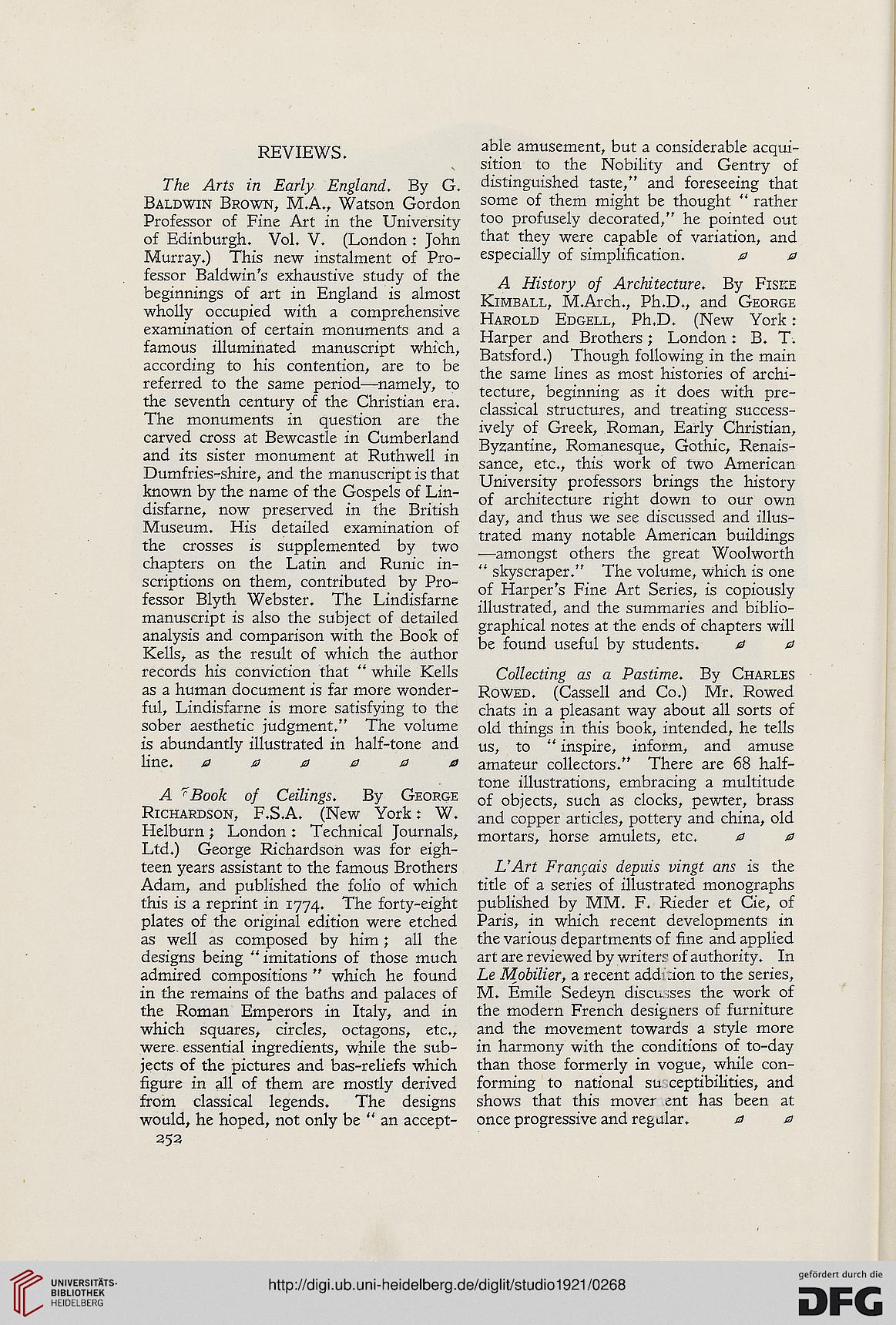 The Arts in Early England. By G.
Baldwin Brown, M.A., Watson Gordon
Professor of Fine Art in the University
of Edinburgh. Vol. V. (London : John
Murray.) This new instalment of Pro-
fessor Baldwin's exhaustive study of the
beginnings of art in England is almost
wholly occupied with a comprehensive
examination of certain monuments and a
famous illuminated manuscript which,
according to his contention, are to be
referred to the same period—namely, to
the seventh century of the Christian era.
The monuments in question are the
carved cross at Bewcastle in Cumberland
and its sister monument at Ruthwell in
Dumfries-shire, and the manuscript is that
known by the name of the Gospels of Lin-
disfarne, now preserved in the British
Museum. His detailed examination of
the crosses is supplemented by two
chapters on the Latin and Runic in-
scriptions on them, contributed by Pro-
fessor Blyth Webster. The Lindisfarne
manuscript is also the subject of detailed
analysis and comparison with the Book of
Kells, as the result of which the author
records his conviction that " while Kells
as a human document is far more wonder-
ful, Lindisfarne is more satisfying to the
sober aesthetic judgment." The volume
is abundantly illustrated in half-tone and
line. 000000

A 7 Book of Ceilings. By George
Richardson, F.S.A. (New York: W.
Helburn ; London : Technical Journals,
Ltd.) George Richardson was for eigh-
teen years assistant to the famous Brothers
Adam, and published the folio of which
this is a reprint in 1774. The forty-eight
plates of the original edition were etched
as well as composed by him; all the
designs being "imitations of those much
admired compositions " which he found
in the remains of the baths and palaces of
the Roman Emperors in Italy, and in
which squares, circles, octagons, etc.,
were, essential ingredients, while the sub-
jects of the pictures and bas-reliefs which
figure in all of them are mostly derived
from classical legends. The designs
would, he hoped, not only be " an accept-

able amusement, but a considerable acqui-
sition to the Nobility and Gentry of
distinguished taste," and foreseeing that
some of them might be thought " rather
too profusely decorated," he pointed out
that they were capable of variation, and
especially of simplification. 0 0

A History of Architecture. By Fiske
Kimball, MArch., Ph.D., and George
Harold Edgell, Ph.D. (New York:
Harper and Brothers ; London : B. T.
Batsford.) Though following in the main
the same lines as most histories of archi-
tecture, beginning as it does with pre-
classical structures, and treating success-
ively of Greek, Roman, Early Christian,
Byzantine, Romanesque, Gothic, Renais-
sance, etc., this work of two American
University professors brings the history
of architecture right down to our own
day, and thus we see discussed and illus-
trated many notable American buildings
—amongst others the great Woolworth
" skyscraper." The volume, which is one
of Harper's Fine Art Series, is copiously
illustrated, and the summaries and biblio-
graphical notes at the ends of chapters will
be found useful by students. 0 0

Collecting as a Pastime. By Charles
Rowed. (Cassell and Co.) Mr. Rowed
chats in a pleasant way about all sorts of
old things in this book, intended, he tells
us, to " inspire, inform, and amuse
amateur collectors." There are 68 half-
tone illustrations, embracing a multitude
of objects, such as clocks, pewter, brass
and copper articles, pottery and china, old
mortars, horse amulets, etc. 0 0

L'Art Francois depuis vingt ans is the
title of a series of illustrated monographs
published by MM. F. Rieder et Cie, of
Paris, in which recent developments in
the various departments of fine and applied
art are reviewed by writerr of authority. In
Le Mobilier, a recent adds ion to the series,
M. Emile Sedeyn discusses the work of
the modern French designers of furniture
and the movement towards a style more
in harmony with the conditions of to-day
than those formerly in vogue, while con-
forming to national su ceptibilities, and
shows that this mover ent has been at
once progressive and regalar. 0 0