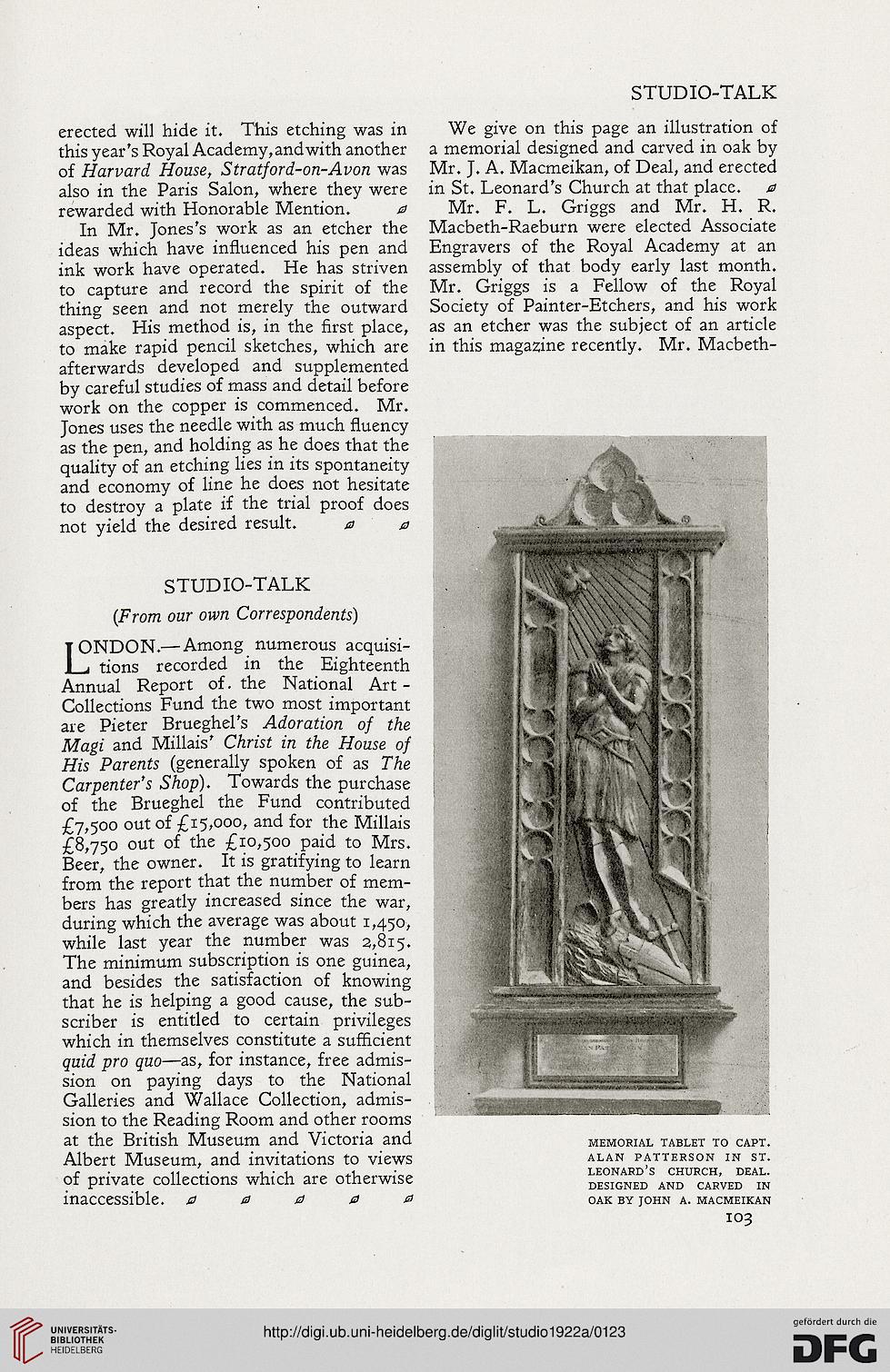 erected will hide it. This etching was in
this year's Royal Academy, and with another
of Harvard House, Stratford-on-Avon was
also in the Paris Salon, where they were
rewarded with Honorable Mention. 0
In Mr. Jones's work as an etcher the
ideas which have influenced his pen and
ink work have operated. He has striven
to capture and record the spirit of the
thing seen and not merely the outward
aspect. His method is, in the first place,
to make rapid pencil sketches, which are
afterwards developed and supplemented
by careful studies of mass and detail before
work on the copper is commenced. Mr.
Jones uses the needle with as much fluency
as the pen, and holding as he does that the
quality of an etching lies in its spontaneity
and economy of line he does not hesitate
to destroy a plate if the trial proof does
not yield the desired result. 0 0

STUDIO-TALK
(From our own Correspondents)

LONDON.— Among numerous acquisi-
_j tions recorded in the Eighteenth
Annual Report of. the National Art -
Collections Fund the two most important
are Pieter Brueghel's Adoration of the
Magi and Millais' Christ in the House of
His Parents (generally spoken of as The
Carpenter's Shop). Towards the purchase
of the Brueghel the Fund contributed
£7,500 out of £15,000, and for the Millais
£8,750 out of the £10,500 paid to Mrs.
Beer, the owner. It is gratifying to learn
from the report that the number of mem-
bers has greatly increased since the war,
during which the average was about 1,450,
while last year the number was 2,815.
The minimum subscription is one guinea,
and besides the satisfaction of knowing
that he is helping a good cause, the sub-
scriber is entitled to certain privileges
which in themselves constitute a sufficient
quid pro quo—as, for instance, free admis-
sion on paying days to the National
Galleries and Wallace Collection, admis-
sion to the Reading Room and other rooms
at the British Museum and Victoria and
Albert Museum, and invitations to views
of private collections which are otherwise
inaccessible, 0 0 0 0 0

We give on this page an illustration of
a memorial designed and carved in oak by
Mr. J. A. Macmeikan, of Deal, and erected
in St. Leonard's Church at that place. 0

Mr. F. L. Griggs and Mr. H. R.
Macbeth-Raeburn were elected Associate
Engravers of the Royal Academy at an
assembly of that body early last month.
Mr. Griggs is a Fellow of the Royal
Society of Painter-Etchers, and his work
as an etcher was the subject of an article
in this magazine recently. Mr. Macbeth-

memorial tablet to capt.
alan patterson in st.
Leonard's church, deal,
designed and carved in
oak by john a. macmeikan