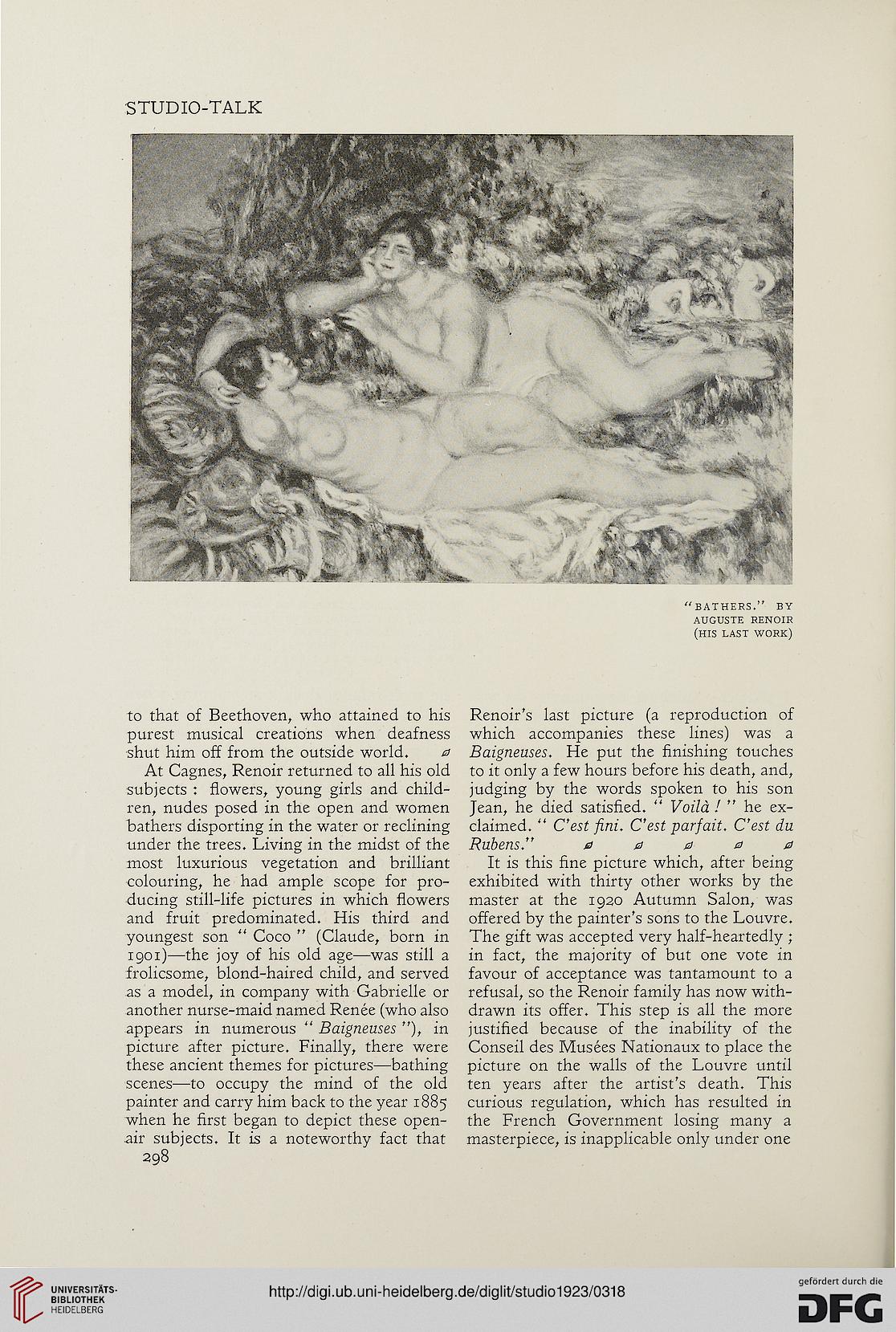 to that of Beethoven, who attained to his
purest musical creations when deafness
shut him off from the outside world. a
At Cagnes, Renoir returned to all his old
subjects : flowers, young girls and child-
ren, nudes posed in the open and women
bathers disporting in the water or reclining
under the trees. Living in the midst of the
most luxurious vegetation and brilliant
colouring, he had ample scope for pro-
ducing still-life pictures in which flowers
and fruit predominated. His third and
youngest son u Coco ” (Claude, born in
1901)—the joy of his old age—was still a
frolicsome, blond-haired child, and served
as a model, in company with Gabrielle or
another nurse-maid named Renee (who also
appears in numerous “ Baigneuses ''), in
picture after picture. Finally, there were
these ancient themes for pictures—bathing
scenes—to occupy the mind of the old
painter and carry him back to the year 1885
when he first began to depict these open-
air subjects. It is a noteworthy fact that
298

Renoir's last picture (a reproduction of
which accompanies these lines) was a
Baigneuses. He put the finishing touches
to it only a few hours before his death, and,
judging by the words spoken to his son
Jean, he died satisfied. “ Voila / '' he ex-
claimed. 44 C'est fini. C'est parfait. C’est du
Rubens.tr a 0 a a a
It is this fine picture which, after being
exhibited with thirty other works by the
master at the 1920 Autumn Salon, was
offered by the painter's sons to the Louvre.
The gift was accepted very half-heartedly ;
in fact, the majority of but one vote in
favour of acceptance was tantamount to a
refusal, so the Renoir family has now with-
drawn its offer. This step is all the more
justified because of the inability of the
Conseil des Musees Nationaux to place the
picture on the walls of the Louvre until
ten years after the artist’s death. This
curious regulation, which has resulted in
the French Government losing many a
masterpiece, is inapplicable only under one