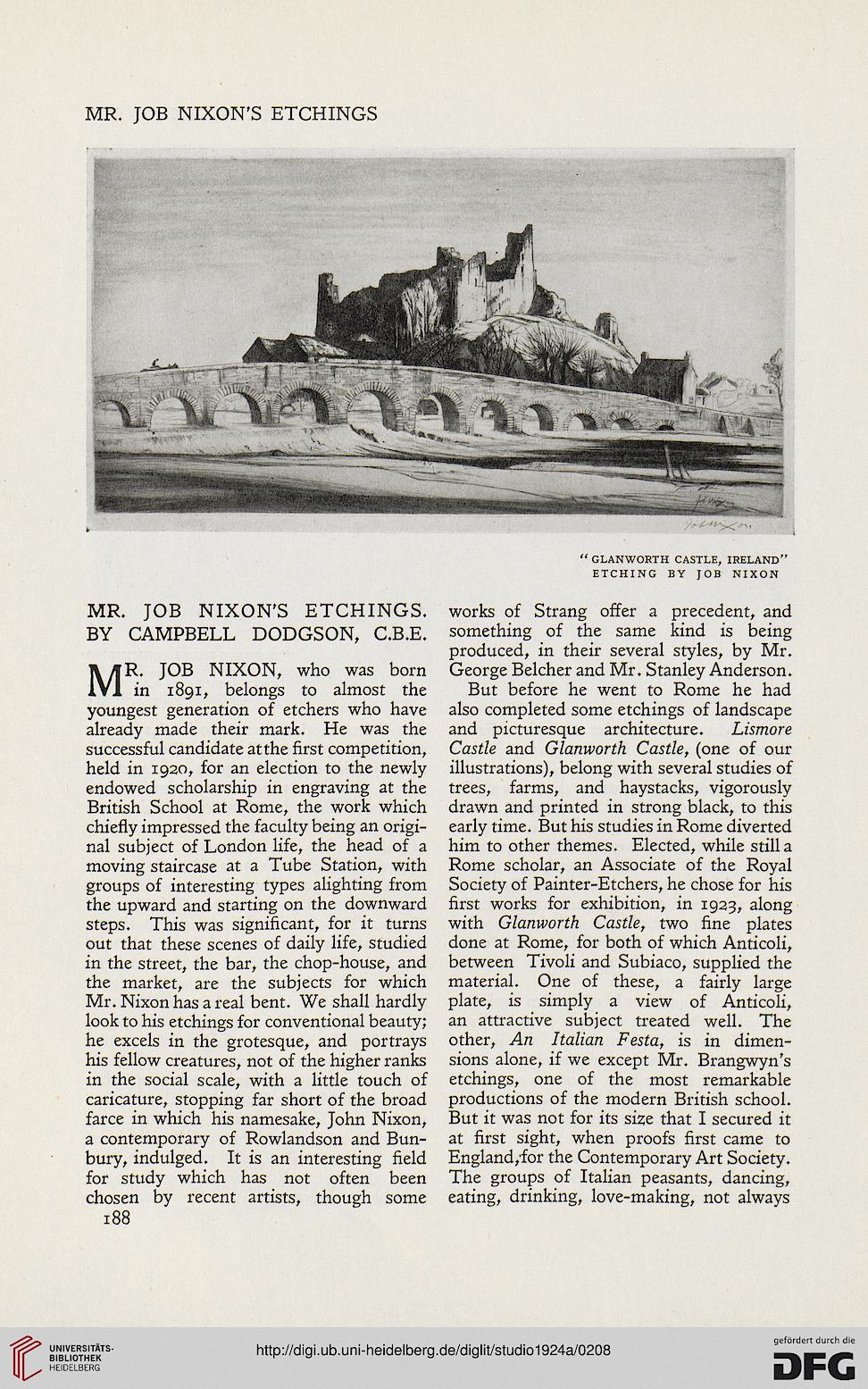 MR. JOB NIXON, who was born
in 1891, belongs to almost the
youngest generation of etchers who have
already made their mark. He was the
successful candidate at the first competition,
held in 1920, for an election to the newly
endowed scholarship in engraving at the
British School at Rome, the work which
chiefly impressed the faculty being an origi-
nal subject of London life, the head of a
moving staircase at a Tube Station, with
groups of interesting types alighting from
the upward and starting on the downward
steps. This was significant, for it turns
out that these scenes of daily life, studied
in the street, the bar, the chop-house, and
the market, are the subjects for which
Mr. Nixon has a real bent. We shall hardly
look to his etchings for conventional beauty;
he excels in the grotesque, and portrays
his fellow creatures, not of the higher ranks
in the social scale, with a little touch of
caricature, stopping far short of the broad
farce in which his namesake, John Nixon,
a contemporary of Rowlandson and Bun-
bury, indulged. It is an interesting field
for study which has not often been
chosen by recent artists, though some
188

works of Strang offer a precedent, and
something of the same kind is being
produced, in their several styles, by Mr.
George Belcher and Mr. Stanley Anderson.

But before he went to Rome he had
also completed some etchings of landscape
and picturesque architecture. Lismore
Castle and Glanworth Castle, (one of our
illustrations), belong with several studies of
trees, farms, and haystacks, vigorously
drawn and printed in strong black, to this
early time. But his studies in Rome diverted
him to other themes. Elected, while still a
Rome scholar, an Associate of the Royal
Society of Painter-Etchers, he chose for his
first works for exhibition, in 1923, along
with Glanworth Castle, two fine plates
done at Rome, for both of which Anticoli,
between Tivoli and Subiaco, supplied the
material. One of these, a fairly large
plate, is simply a view of Anticoli,
an attractive subject treated well. The
other, An Italian Festa, is in dimen-
sions alone, if we except Mr. Brangwyn's
etchings, one of the most remarkable
productions of the modern British school.
But it was not for its size that I secured it
at first sight, when proofs first came to
England,for the Contemporary Art Society.
The groups of Italian peasants, dancing,
eating, drinking, love-making, not always