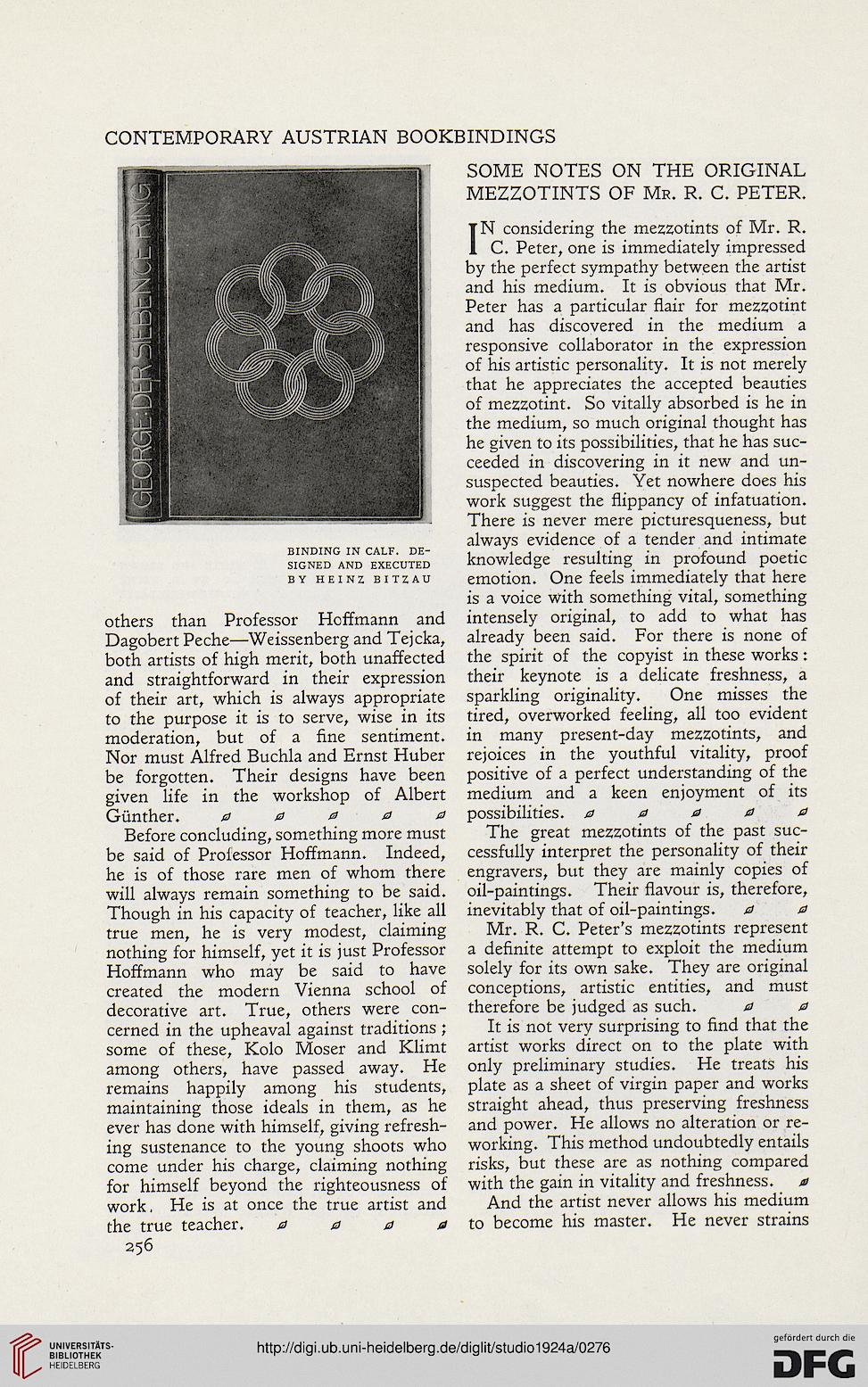 BINDING IN CALF. DE-
SIGNED AND EXECUTED
BY HEINZ BITZAU

others than Professor Hoffmann and
Dagobert Peche—Weissenberg and Tejcka,
both artists of high merit, both unaffected
and straightforward in their expression
of their art, which is always appropriate
to the purpose it is to serve, wise in its
moderation, but of a fine sentiment.
Nor must Alfred Buchla and Ernst Huber
be forgotten. Their designs have been
given life in the workshop of Albert
Giinther. a 0 a a a

Before concluding, something more must
be said of Professor Hoffmann. Indeed,
he is of those rare men of whom there
will always remain something to be said.
Though in his capacity of teacher, like all
true men, he is very modest, claiming
nothing for himself, yet it is just Professor
Hoffmann who may be said to have
created the modern Vienna school of
decorative art. True, others were con-
cerned in the upheaval against traditions ;
some of these, Kolo Moser and Klimt
among others, have passed away. He
remains happily among his students,
maintaining those ideals in them, as he
ever has done with himself, giving refresh-
ing sustenance to the young shoots who
come under his charge, claiming nothing
for himself beyond the righteousness of
work. He is at once the true artist and
the true teacher. a a a a

SOME NOTES ON THE ORIGINAL
MEZZOTINTS OF Mr. R. C. PETER.

IN considering the mezzotints of Mr. R.
C. Peter, one is immediately impressed
by the perfect sympathy between the artist
and his medium. It is obvious that Mr.
Peter has a particular flair for mezzotint
and has discovered in the medium a
responsive collaborator in the expression
of his artistic personality. It is not merely
that he appreciates the accepted beauties
of mezzotint. So vitally absorbed is he in
the medium, so much original thought has
he given to its possibilities, that he has suc-
ceeded in discovering in it new and un-
suspected beauties. Yet nowhere does his
work suggest the flippancy of infatuation.
There is never mere picturesqueness, but
always evidence of a tender and intimate
knowledge resulting in profound poetic
emotion. One feels immediately that here
is a voice with something vital, something
intensely original, to add to what has
already been said. For there is none of
the spirit of the copyist in these works:
their keynote is a delicate freshness, a
sparkling originality. One misses the
tired, overworked feeling, all too evident
in many present-day mezzotints, and
rejoices in the youthful vitality, proof
positive of a perfect understanding of the
medium and a keen enjoyment of its
possibilities. 0 a a e> a
The great mezzotints of the past suc-
cessfully interpret the personality of their
engravers, but they are mainly copies of
oil-paintings. Their flavour is, therefore,
inevitably that of oil-paintings. a a
Mr. R. C. Peter's mezzotints represent
a definite attempt to exploit the medium
solely for its own sake. They are original
conceptions, artistic entities, and must
therefore be judged as such. a 0
It is not very surprising to find that the
artist works direct on to the plate with
only preliminary studies. He treats his
plate as a sheet of virgin paper and works
straight ahead, thus preserving freshness
and power. He allows no alteration or re-
working. This method undoubtedly entails
risks, but these are as nothing compared
with the gain in vitality and freshness, m
And the artist never allows his medium
to become his master. He never strains