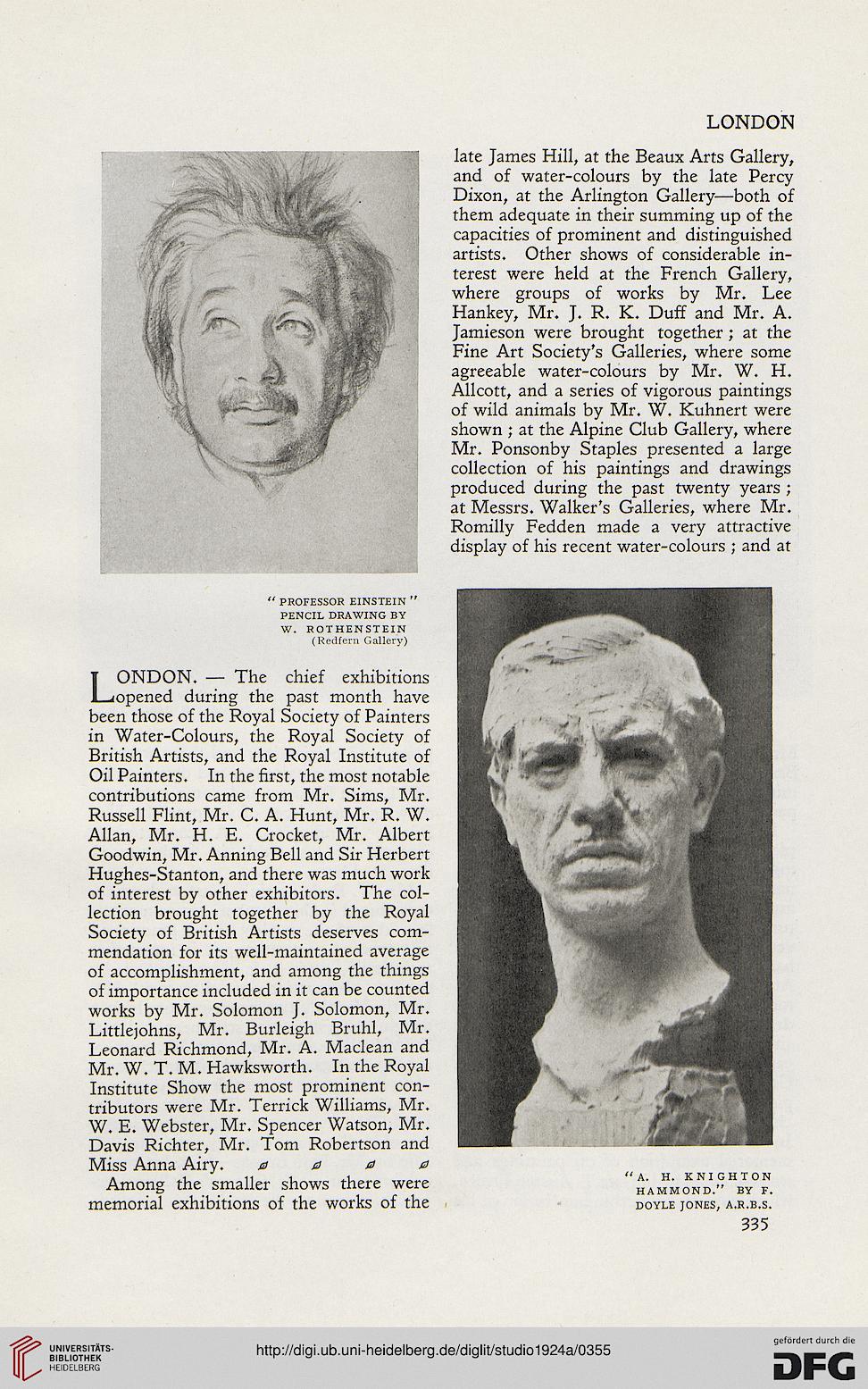 LONDON. — The chief exhibitions
opened during the past month have
been those of the Royal Society of Painters
in Water-Colours, the Royal Society of
British Artists, and the Royal Institute of
Oil Painters. In the first, the most notable
contributions came from Mr. Sims, Mr.
Russell Flint, Mr. C. A. Hunt, Mr. R. W.
Allan, Mr. H. E. Crocket, Mr. Albert
Goodwin, Mr. Anning Bell and Sir Herbert
Hughes-Stanton, and there was much work
of interest by other exhibitors. The col-
lection brought together by the Royal
Society of British Artists deserves com-
mendation for its well-maintained average
of accomplishment, and among the things
of importance included in it can be counted
works by Mr. Solomon J. Solomon, Mr.
Littlejohns, Mr. Burleigh Bruhl, Mr.
Leonard Richmond, Mr. A. Maclean and
Mr. W. T. M. Hawksworth. In the Royal
Institute Show the most prominent con-
tributors were Mr. Terrick Williams, Mr.
W. E. Webster, Mr. Spencer Watson, Mr.
Davis Richter, Mr. Tom Robertson and
Miss Anna Airy. 0000
Among the smaller shows there were
memorial exhibitions of the works of the

late James Hill, at the Beaux Arts Gallery,
and of water-colours by the late Percy
Dixon, at the Arlington Gallery—both of
them adequate in their summing up of the
capacities of prominent and distinguished
artists. Other shows of considerable in-
terest were held at the French Gallery,
where groups of works by Mr. Lee
Hankey, Mr. J. R. K. Duff and Mr. A.
Jamieson were brought together; at the
Fine Art Society's Galleries, where some
agreeable water-colours by Mr. W. H.
Allcott, and a series of vigorous paintings
of wild animals by Mr. W. Kuhnert were
shown ; at the Alpine Club Gallery, where
Mr. Ponsonby Staples presented a large
collection of his paintings and drawings
produced during the past twenty years ;
at Messrs. Walker's Galleries, where Mr.
Romilly Fedden made a very attractive
display of his recent water-colours ; and at