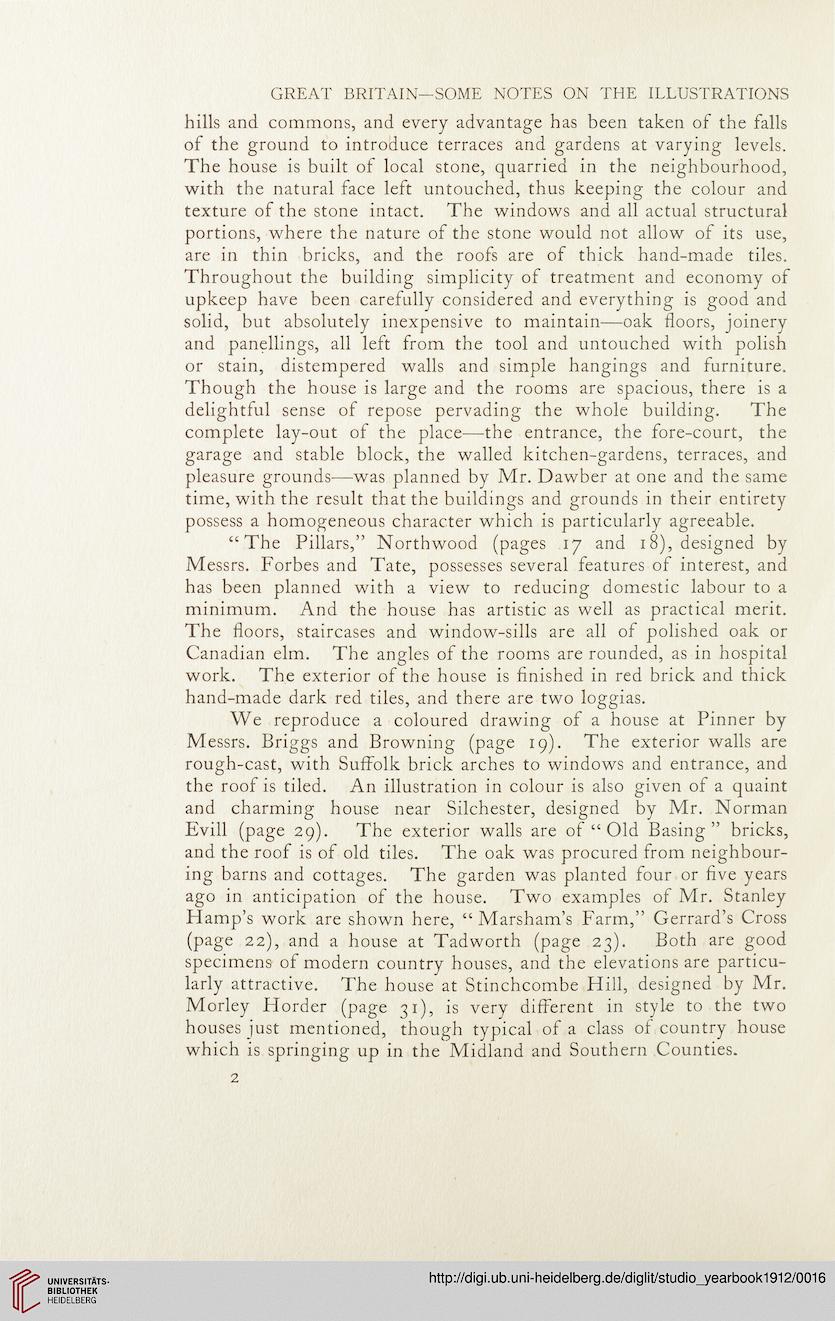 Scroll
OCR fulltext
Information about OCR text
GREAT BRITAIN—SOME NOTES ON THE ILLUSTRATIONS
hills and commons, and every advantage has been taken of the falls
of the ground to introduce terraces and gardens at varying levels.
The house is built of local stone, quarried in the neighbourhood,
with the natural face left untouched, thus keeping the colour and
texture of the stone intact. The windows and all actual structural
portions, where the nature of the stone would not allow of its use,
are in thin bricks, and the roofs are of thick hand-made tiles.
Throughout the building simplicity of treatment and economy of
upkeep have been carefully considered and everything is good and
solid, but absolutely inexpensive to maintain—oak floors, joinery
and panellings, all left from the tool and untouched with polish
or stain, distempered walls and simple hangings and furniture.
Though the house is large and the rooms are spacious, there is a
delightful sense of repose pervading the whole building. The
complete lay-out of the place—the entrance, the fore-court, the
garage and stable block, the walled kitchen-gardens, terraces, and
pleasure grounds—was planned by Mr. Dawber at one and the same
time, with the result that the buildings and grounds in their entirety
possess a homogeneous character which is particularly agreeable.
“The Pillars,” Northwood (pages 17 and 18), designed by
Messrs. Forbes and Tate, possesses several features of interest, and
has been planned with a view to reducing domestic labour to a
minimum. And the house has artistic as well as practical merit.
The floors, staircases and window-sills are all of polished oak or
Canadian elm. The angles of the rooms are rounded, as in hospital
work. The exterior of the house is finished in red brick and thick
hand-made dark red tiles, and there are two loggias.
We reproduce a coloured drawing of a house at Pinner by
Messrs. Briggs and Browning (page 19). The exterior walls are
rough-cast, with Suffolk brick arches to windows and entrance, and
the roof is tiled. An illustration in colour is also given of a quaint
and charming house near Silchester, designed by Mr. Norman
Evill (page 29). The exterior walls are of “ Old Basing” bricks,
and the roof is of old tiles. The oak was procured from neighbour-
ing barns and cottages. The garden was planted four or five years
ago in anticipation of the house. Two examples of Mr. Stanley
Hamp’s work are shown here, “ Marsham’s Farm,” Gerrard’s Cross
(page 22), and a house at Tadworth (page 23). Both are good
specimens of modern country houses, and the elevations are particu-
larly attractive. The house at Stinchcombe Hill, designed by Mr.
Morley Horder (page 31), is very different in style to the two
houses just mentioned, though typical of a class of country house
which is springing up in the Midland and Southern Counties.