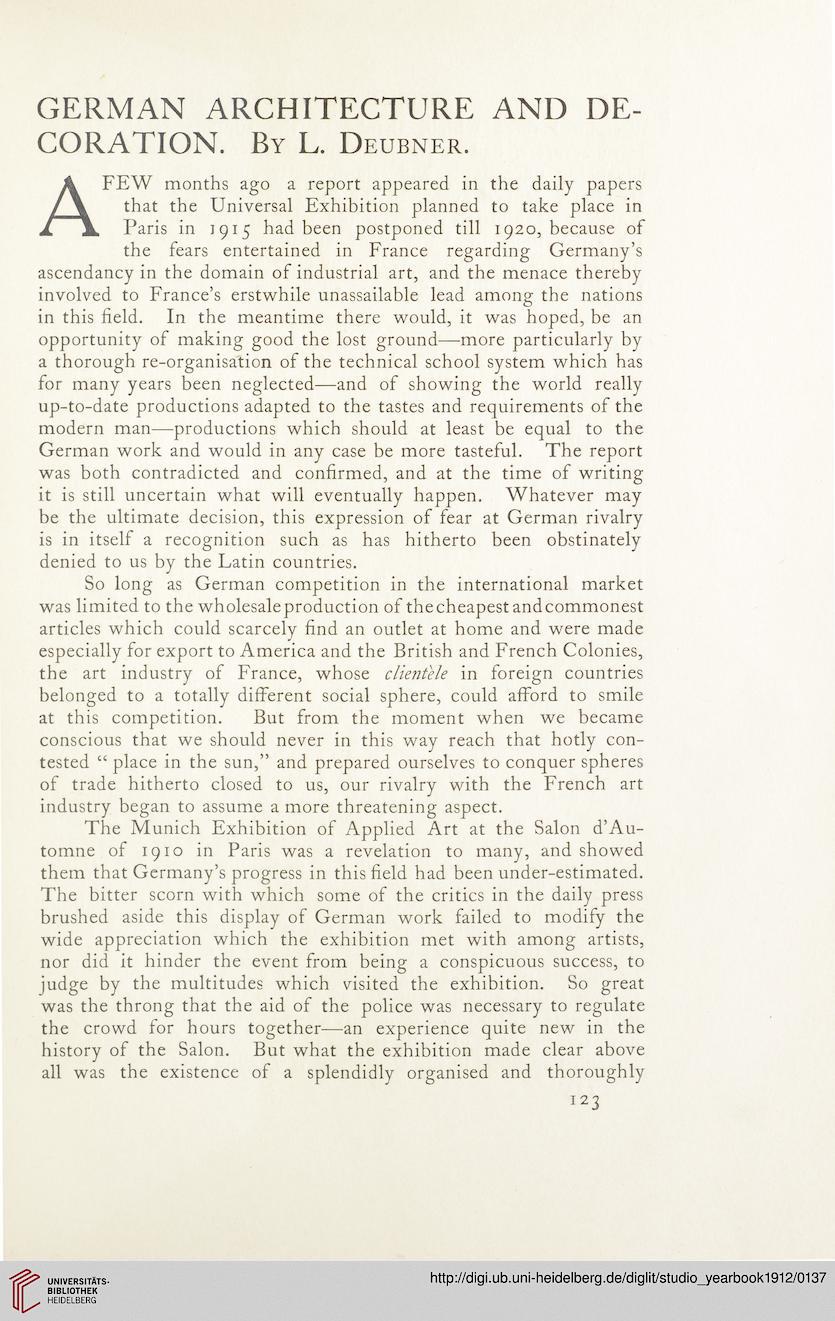 A FEW months ago a report appeared in the daily papers
that the Universal Exhibition planned to take place in
Paris in 1915 had been postponed till 1920, because of
the fears entertained in France regarding Germany’s
ascendancy in the domain of industrial art, and the menace thereby
involved to France’s erstwhile unassailable lead among the nations
in this field. In the meantime there would, it was hoped, be an
opportunity of making good the lost ground—more particularly by
a thorough re-organisation of the technical school system which has
for many years been neglected—and of showing the world really
up-to-date productions adapted to the tastes and requirements of the
modern man—productions which should at least be equal to the
German work and would in any case be more tasteful. The report
was both contradicted and confirmed, and at the time of writing
it is still uncertain what will eventually happen. Whatever may
be the ultimate decision, this expression of fear at German rivalry
is in itself a recognition such as has hitherto been obstinately
denied to us by the Latin countries.
So long as German competition in the international market
was limited to the wholesaleproduction of thecheapestandcommonest
articles which could scarcely find an outlet at home and were made
especially for export to America and the British and French Colonies,
the art industry of France, whose clientele in foreign countries
belonged to a totally different social sphere, could afford to smile
at this competition. But from the moment when we became
conscious that we should never in this way reach that hotly con-
tested “ place in the sun,” and prepared ourselves to conquer spheres
of trade hitherto closed to us, our rivalry with the French art
industry began to assume a more threatening aspect.
The Munich Exhibition of Applied Art at the Salon d’Au-
tomne of 1910 in Paris was a revelation to many, and showed
them that Germany’s progress in this field had been under-estimated.
The bitter scorn with which some of the critics in the daily press
brushed aside this display of German work failed to modify the
wide appreciation which the exhibition met with among artists,
nor did it hinder the event from being a conspicuous success, to
judge by the multitudes which visited the exhibition. So great
was the throng that the aid of the police was necessary to regulate
the crowd for hours together—an experience quite new in the
history of the Salon. But what the exhibition made clear above
all was the existence of a splendidly organised and thoroughly
123