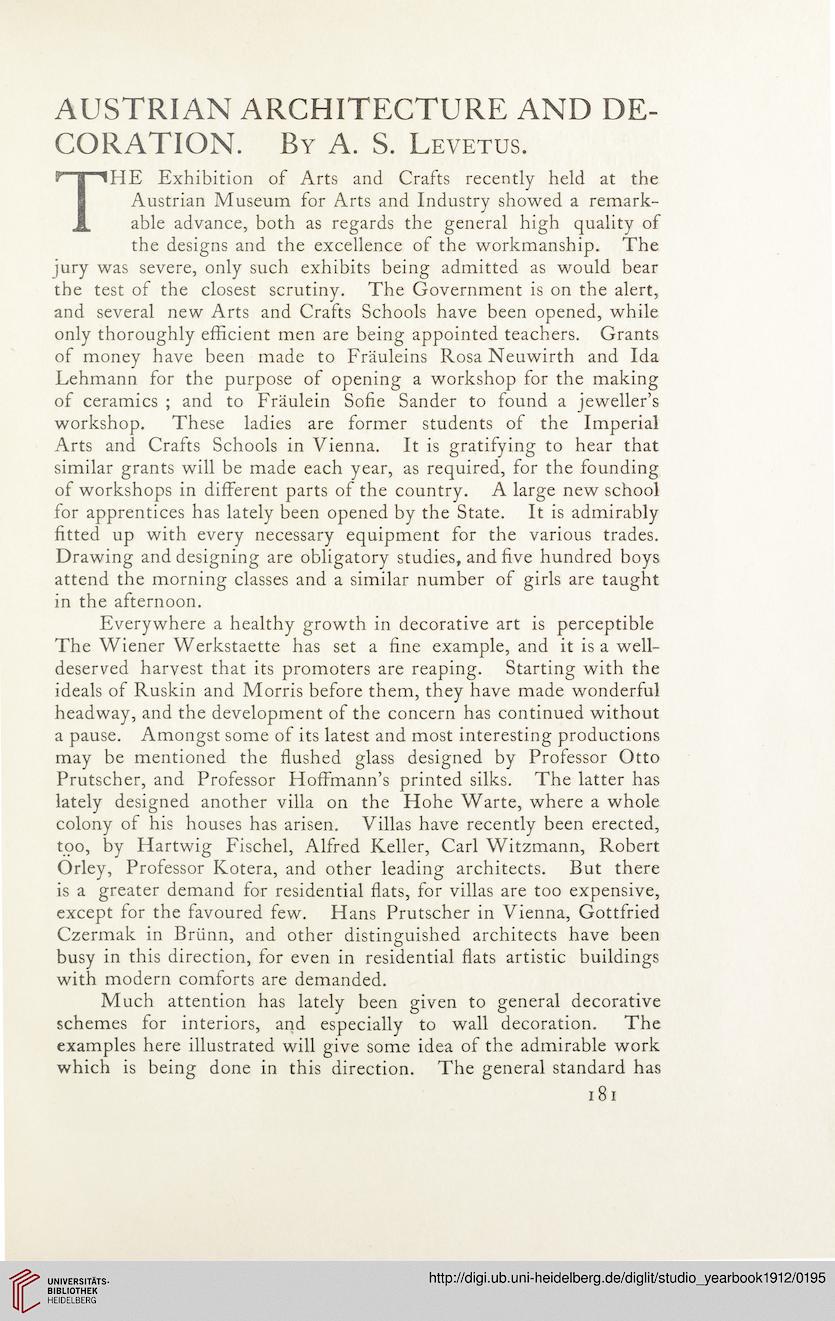 Information about OCR text
AUSTRIAN ARCHITECTURE AND DE-
CORATION. By A. S. Levetus.

THE Exhibition of Arts and Crafts recently held at the
Austrian Museum for Arts and Industry showed a remark-
able advance, both as regards the general high quality of
the designs and the excellence of the workmanship. The
jury was severe, only such exhibits being admitted as would bear
the test of the closest scrutiny. The Government is on the alert,
and several new Arts and Crafts Schools have been opened, while
only thoroughly efficient men are being appointed teachers. Grants
of money have been made to Frauleins RosaNeuwirth and Ida
Lehmann for the purpose of opening a workshop for the making
of ceramics ; and to Fraulein Sofie Sander to found a jeweller’s
workshop. These ladies are former students of the Imperial
Arts and Crafts Schools in Vienna. It is gratifying to hear that
similar grants will be made each year, as required, for the founding
of workshops in different parts of the country. A large new school
for apprentices has lately been opened by the State. It is admirably
fitted up with every necessary equipment for the various trades.
Drawing and designing are obligatory studies, and five hundred boys
attend the morning classes and a similar number of girls are taught
in the afternoon.
Everywhere a healthy growth in decorative art is perceptible
The Wiener Werkstaette has set a fine example, and it is a well-
deserved harvest that its promoters are reaping. Starting with the
ideals of Ruskin and Morris before them, they have made wonderful
headway, and the development of the concern has continued without
a pause. Amongst some of its latest and most interesting productions
may be mentioned the flushed glass designed by Professor Otto
Prutscher, and Professor Hoffmann’s printed silks. The latter has
lately designed another villa on the Hohe Warte, where a whole
colony of his houses has arisen. Villas have recently been erected,
too, by Hartwig Fischel, Alfred Keller, Carl Witzmann, Robert
Orley, Professor Kotera, and other leading architects. But there
is a greater demand for residential flats, for villas are too expensive,
except for the favoured few. Hans Prutscher in Vienna, Gottfried
Czermak in Briinn, and other distinguished architects have been
busy in this direction, for even in residential flats artistic buildings
with modern comforts are demanded.
Much attention has lately been given to general decorative
schemes for interiors, and especially to wall decoration. The
examples here illustrated will give some idea of the admirable work
which is being done in this direction. The general standard has
181