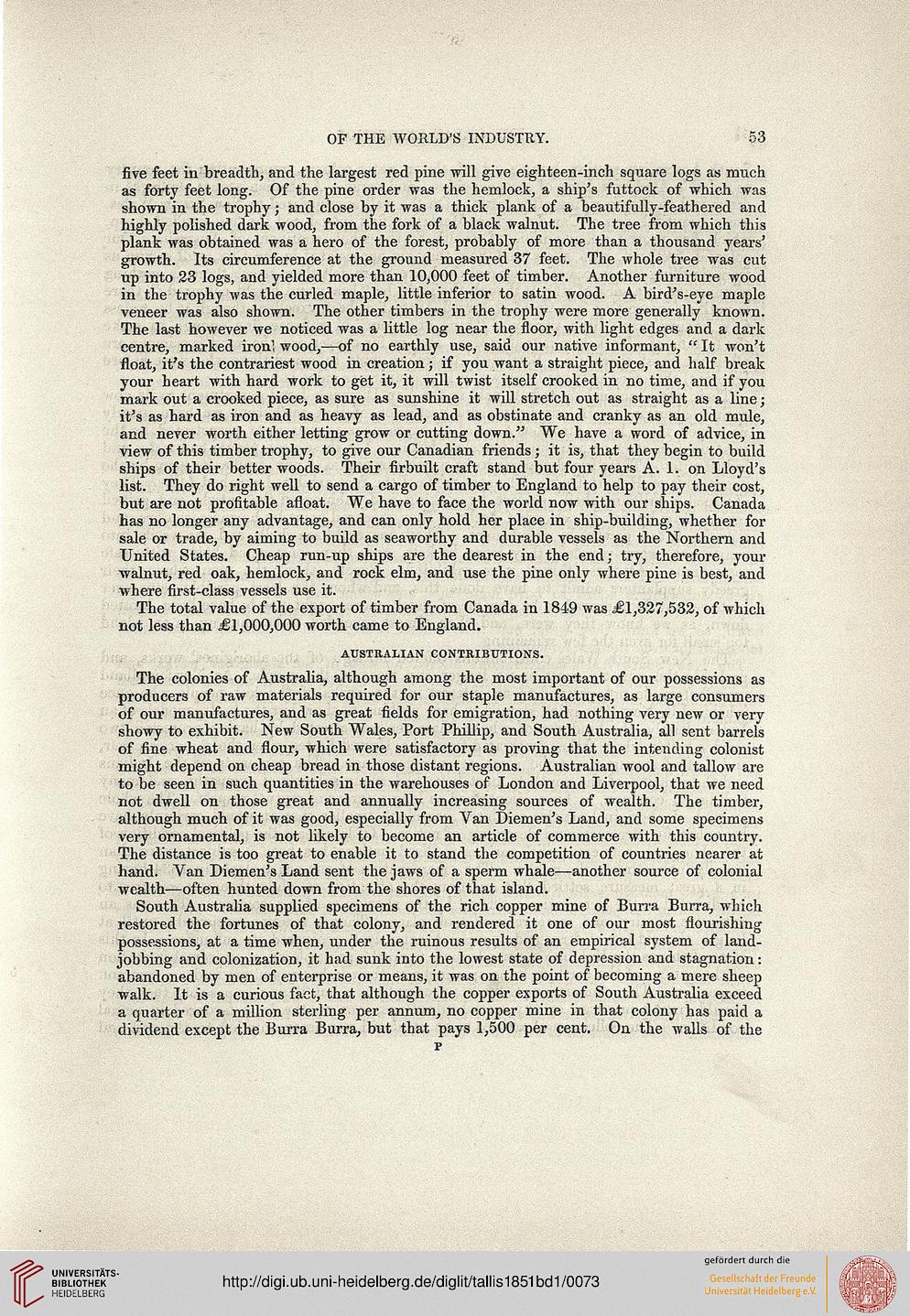 Information about OCR text
OF THE WORLD'S INDUSTRY. 53

five feet in breadth, and the largest red pine will give eighteen-ineh square logs as much
as forty feet long. Of the pine order was the hemlock, a ship's futtock of which was
shown in the trophy; and close by it was a thick plank of a beautifully-feathered and
highly polished dark wood, from the fork of a black walnut. The tree from which this
plank was obtained was a hero of the forest, probably of more than a thousand years'
growth. Its circumference at the ground measured 37 feet. The whole tree was cut
up into 23 logs, and yielded more than 10,000 feet of timber. Another furniture wood
in the trophy was the curled maple, little inferior to satin wood. A bird's-eye maple
veneer was also shown. The other timbers in the trophy were more generally known.
The last however we noticed was a little log near the floor, with light edges and a dark
centre, marked iron1, wood,—of no earthly use, said our native informant, " It won't
float, it's the contrariest wood in creation; if you want a straight piece, and half break
your heart with hard work to get it, it will twist itself crooked in no time, and if you
mark out a crooked piece, as sure as sunshine it will stretch out as straight as a line;
it's as hard as iron and as heavy as lead, and as obstinate and cranky as an old mule,
and never worth either letting grow or cutting down." We have a word of advice, in
view of this timber trophy, to give our Canadian friends; it is, that they begin to build
ships of their better woods. Their firbuilt craft stand but four years A. 1. on Lloyd's
list. They do right well to send a cargo of timber to England to help to pay their cost,
but are not profitable afloat. We have to face the world now with our ships. Canada
has no longer any advantage, and can only hold her place in ship-building, whether for
sale or trade, by aiming to build as seaworthy and durable vessels as the Northern and
United States. Cheap run-up ships are the dearest in the end; try, therefore, your
walnut, red oak, hemlock, and rock elm, and use the pine only where pine is best, and
where first-class vessels use it.

The colonies of Australia, although among the most important of our possessions as
producers of raw materials required for our staple manufactures, as large consumers
of our manufactures, and as great fields for emigration, had nothing very new or very
showy to exhibit. New South Wales, Port Phillip, and South Australia, all sent barrels
of fine wheat and flour, which were satisfactory as proving that the intending colonist
might depend on cheap bread in those distant regions. Australian wool and tallow are
to be seen in such quantities in the warehouses of London and Liverpool, that we need
not dwell on those great and annually increasing sources of wealth. The timber,
although much of it was good, especially from Van Diemen's Land, and some specimens
very ornamental, is not likely to become an article of commerce with this country.
The distance is too great to enable it to stand the competition of countries nearer at
hand. Van Diemen's Land sent the jaws of a sperm whale—another source of colonial
wealth—often hunted down from the shores of that island.

South Australia supplied specimens of the rich copper mine of Burra Burra, which
restored the fortunes of that colony, and rendered it one of our most flourishing
possessions, at a time when, under the ruinous results of an empirical system of land-
jobbing and colonization, it had sunk into the lowest state of depression and stagnation:
abandoned by men of enterprise or means, it was on the point of becoming a mere sheep
walk. It is a curious fact, that although the copper exports of South Australia exceed
a quarter of a million sterling per annum, no copper mine in that colony has paid a
dividend except the Burra Burra, but that pays 1,500 per cent. On the walls of the