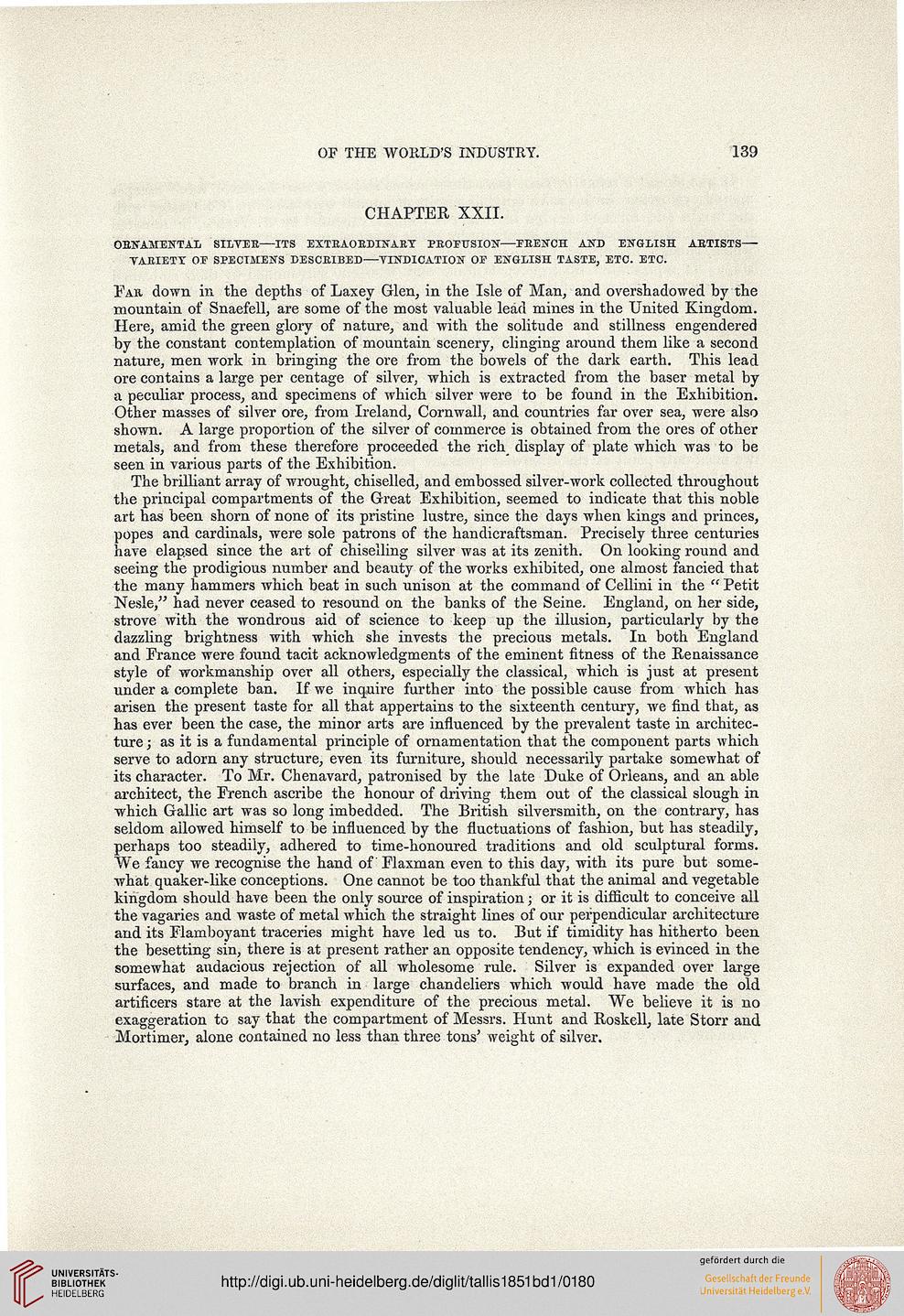 Information about OCR text
OF THE WORLD'S INDUSTRY. 139

Far down in the depths of Laxey Glen, in the Isle of Man, and overshadowed by the
mountain of Snaefell, are some of the most valuable lead mines in the United Kingdom.
Here, amid the green glory of nature, and with the solitude and stillness engendered
by the constant contemplation of mountain scenery, clinging around them like a second
nature, men work in bringing the ore from the bowels of the dark earth. This lead
ore contains a large per centage of silver, which is extracted from the baser metal by
a peculiar process, and specimens of which silver were to be found in the Exhibition.
Other masses of silver ore, from Ireland, Cornwall, and countries far over sea, were also
shown. A large proportion of the silver of commerce is obtained from the ores of other
metals, and from these therefore proceeded the rich display of plate which was to be
seen in various parts of the Exhibition.

The brilliant array of wrought, chiselled, and embossed silver-work collected throughout
the principal compartments of the Great Exhibition, seemed to indicate that this noble
art has been shorn of none of its pristine lustre, since the days when kings and princes,
popes and cardinals, were sole patrons of the handicraftsman. Precisely three centuries
have elapsed since the art of chiselling silver was at its zenith. On looking round and
seeing the prodigious number and beauty of the works exhibited, one almost fancied that
the many hammers which beat in such unison at the command of Cellini in the " Petit
Nesley" had never ceased to resound on the banks of the Seine. England, on her side,
strove with the wondrous aid of science to keep up the illusion, particularly by the
dazzling brightness with which she invests the precious metals. In both England
and France were found tacit acknowledgments of the eminent fitness of the Renaissance
style of workmanship over all others, especially the classical, which is just at present
under a complete ban. If we inquire further into the possible cause from which has
arisen the present taste for all that appertains to the sixteenth century, we find that, as
has ever been the case, the minor arts are influenced by the prevalent taste in architec-
ture ; as it is a fundamental principle of ornamentation that the component parts which
serve to adorn any structure, even its furniture, should necessarily partake somewhat of
its character. To Mr. Chenavard, patronised by the late Duke of Orleans, and an able
architect, the French ascribe the honour of driving them out of the classical slough in
which Gallic art was so long imbedded. The British silversmith, on the contrary, has
seldom allowed himself to be influenced by the fluctuations of fashion, but has steadily,
perhaps too steadily, adhered to time-honoured traditions and old sculptural forms.
We fancy we recognise the hand of Flaxman even to this day, with its pure but some-
what quaker-like conceptions. One cannot be too thankful that the animal and vegetable
kingdom should have been the only source of inspiration; or it is difficult to conceive all
the vagaries and waste of metal which the straight lines of our perpendicular architecture
and its Flamboyant traceries might have led us to. But if timidity has hitherto been
the besetting sin, there is at present rather an opposite tendency, which is evinced in the
somewhat audacious rejection of all wholesome rule. Silver is expanded over large
surfaces, and made to branch in large chandeliers which would have made the old
artificers stare at the lavish expenditure of the precious metal. We believe it is no
exaggeration to say that the compartment of Messrs. Hunt and Roskell, late Storr and
Mortimer, alone contained no less than three tons' weight of silver.