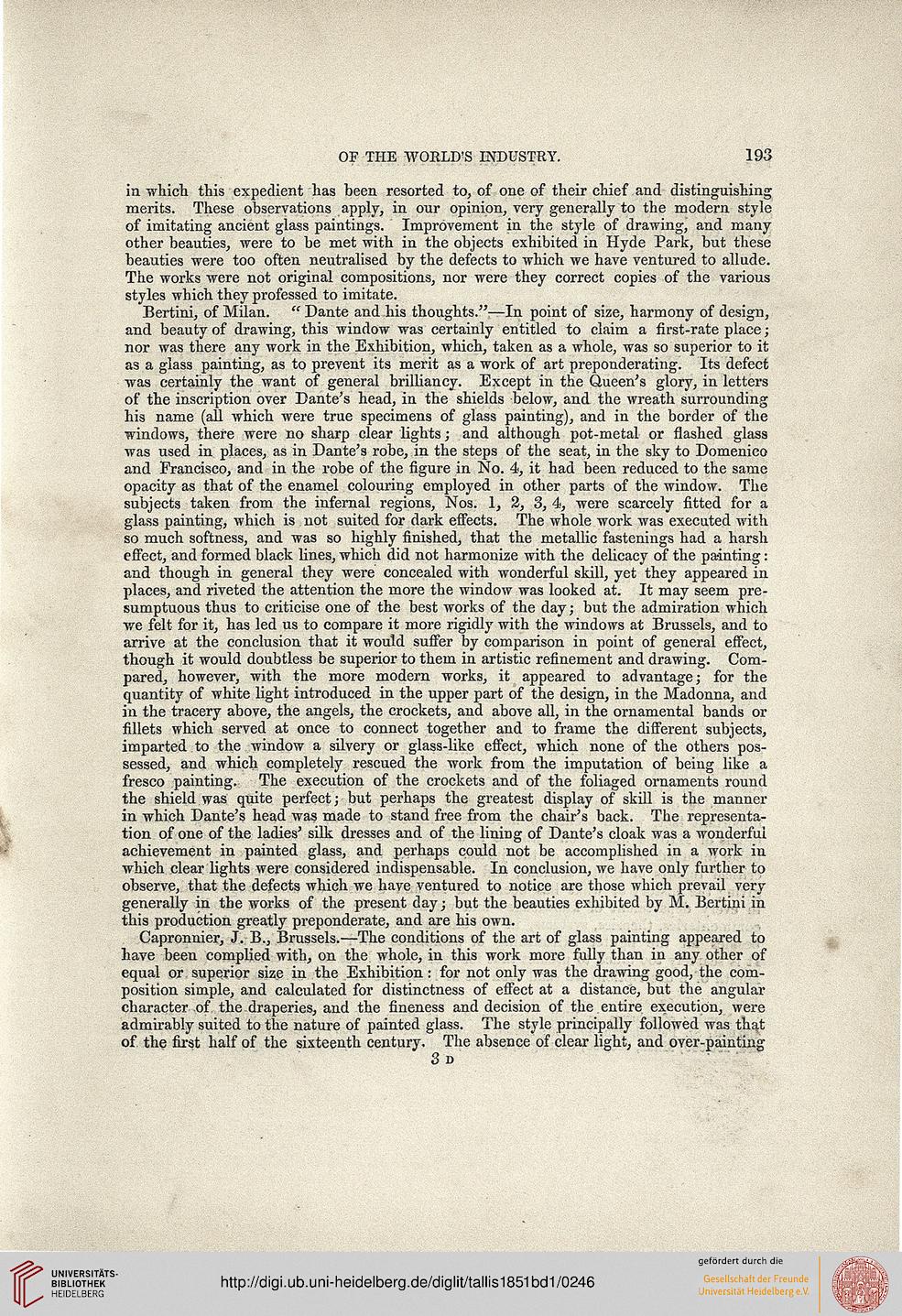 Information about OCR text
OF THE WORLD'S INDUSTRY. 193

in which this expedient has been resorted to, of one of their chief and distinguishing
merits. These observations .apply, in our opinion, very generally to the modern style
of imitating ancient glass paintings. Improvement in the style of drawing, and many
other beauties, were to be met with in the objects exhibited in Hyde Park, but these
beauties were too often neutralised by the defects to which we have ventured to allude.
The works were not original compositions, nor were they correct copies of the various
styles which they professed to imitate.

Bertini, of Milan. " Dante and his thoughts.";—In point of size, harmony of design,
and beauty of drawing, this window was certainly entitled to claim a first-rate place;
nor was there any work in the Exhibition, which, taken as a whole, was so superior to it
as a glass painting, as to prevent its merit as a work of art preponderating. Its defect
was certainly the want of general brilliancy. Except in the Queen's glory, in letters
of the inscription over Dante's head, in the shields below, and the wreath surrounding
his name (all which were true specimens of glass painting), and in the border of the
windows, there were no sharp clear lights; and although pot-metal or flashed glass
was used in places, as in Dante's robe, in the steps of the seat, in the sky to Domenico
and Francisco, and in the robe of the figure in No. 4, it had been reduced to the same
opacity as that of the enamel colouring employed in other parts of the window. The
subjects taken from the infernal regions, Nos. 1, 2, 3, 4, were scarcely fitted for a
glass painting, which is not suited for dark effects. The whole work was executed with
so much softness, and was so highly finished, that the metallic fastenings had a harsh
effect, and formed black lines, which did not harmonize with the delicacy of the painting:
and though, in general they were concealed with wonderful skill, yet they appeared in
places, and riveted the attention the more the window was looked at. It may seem pre-
sumptuous thus to criticise one of the best works of the day; but the admiration which
we felt for it, has led us to compare it more rigidly with the windows at Brussels, and to
arrive at the conclusion that it would suffer by comparison in point of general effect,
though it would doubtless be superior to them in artistic refinement and drawing. Com-
pared, however, with the more modern works, it appeared to advantage; for tbe
quantity of white light introduced in the upper part of the design, in the Madonna, and
in the tracery above, the angels, the crockets, and above all, in the ornamental bands or
fillets which served at once to connect together and to frame the different subjects,
imparted to the window a silvery or glass-like effect, which none of the others pos-
sessed, and which completely rescued the work from the imputation of being like a
fresco painting. The execution of the crockets and of the foliaged ornaments round
the shield was quite perfect; but perhaps the greatest display of skill is the manner
in which Dante's head was made to stand free from the chair's back. The representa-
tion of one of the ladies' silk dresses and of the lining of Dante's cloak was a wonderful
achievement in painted glass, and perhaps could not be accomplished in a work in
which clear lights were considered indispensable. In conclusion, we have only further to
observe, that the defects which we have ventured to notice are those which prevail very
generally in the works of the present day; but the beauties exhibited by M. Bertini in
this production greatly preponderate, and are his own.

Capronnier, J. B., Brussels.—The conditions of the art of glass painting appeared to
have been complied with, on the whole, in this work more fully than in any other of
equal or.superior size in the Exhibition: for not only was the drawing good, the com-
position simple, and calculated for distinctness of effect at a distance, but the angular
character of. the draperies, and the fineness and decision of the entire execution, were
admirably suited to the nature of painted glass. The style principally followed was that
of the first half of the sixteenth century. The absence of clear light, and over-painting