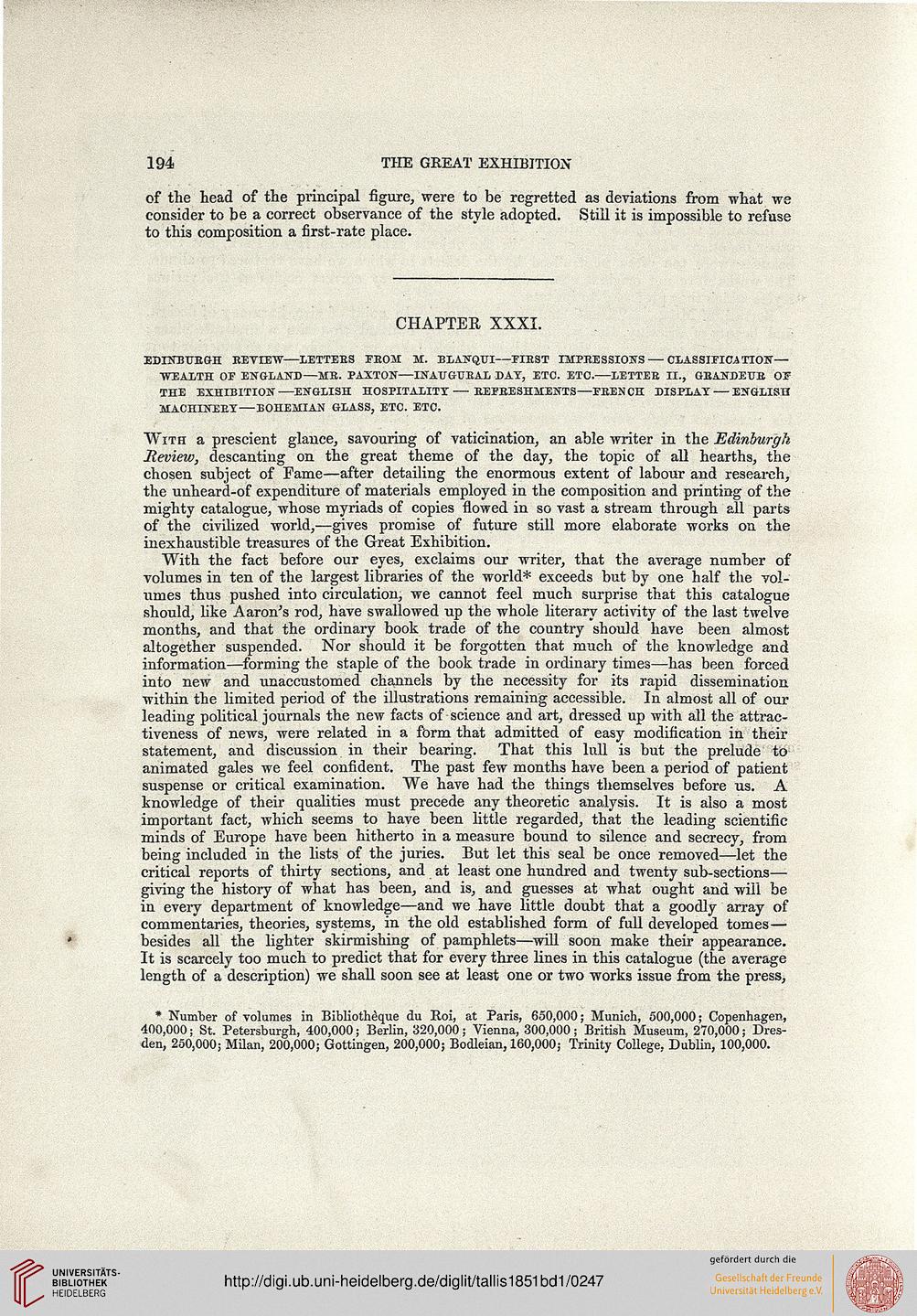 of the head of the principal figure, were to be regretted as deviations from what we
consider to be a correct observance of the style adopted. Still it is impossible to refuse
to this composition a first-rate place.

With a prescient glance, savouring of vaticination, an able writer in the Edinburgh
Review, descanting on the great theme of the day, the topic of all hearths, the
chosen subject of Fame—after detailing the enormous extent of labour and research,
the unheard-of expenditure of materials employed in the composition and printing of the
mighty catalogue, whose myriads of copies flowed in so vast a stream through all parts
of the civilized world,—gives promise of future still more elaborate works on the
inexhaustible treasures of the Great Exhibition.

With the fact before our eyes, exclaims our writer, that the average number of
volumes in ten of the largest libraries of the world* exceeds but by one half the vol-
umes thus pushed into circulation, we cannot feel much surprise that this catalogue
should, like Aaron's rod, have swallowed up the whole literary activity of the last twelve
months, and that the ordinary book trade of the country should have been almost
altogether suspended. Nor should it be forgotten that much of the knowledge and
information—forming the staple of the book trade in ordinary times—has been forced
into new and unaccustomed channels by the necessity for its rapid dissemination
within the limited period of the illustrations remaining accessible. In almost all of our
leading political journals the new facts of science and art, dressed up with all the attrac-
tiveness of news, were related in a form that admitted of easy modification in their
statement, and discussion in their bearing. That this lull is hut the prelude to
animated gales we feel confident. The past few months have been a period of patient
suspense or critical examination. We have had the things themselves before us. A
knowledge of their qualities must precede any theoretic analysis. It is also a most
important fact, which seems to have been little regarded, that the leading scientific
minds of Europe have been hitherto in a measure bound to silence and secrecy, from
being included in the lists of the juries. But let this seal be once removed—let the
critical reports of thirty sections, and at least one hundred and twenty sub-sections—
giving the history of what has been, and is, and guesses at what ought and will be
in every department of knowledge—and we have little doubt that a goodly array of
commentaries, theories, systems, in the old established form of full developed tomes—
besides all the lighter skirmishing of pamphlets—will soon make their appearance.
It is scarcely too much to predict that for every three lines in this catalogue (the average
length of a description) we shall soon see at least one or two works issue from the press,