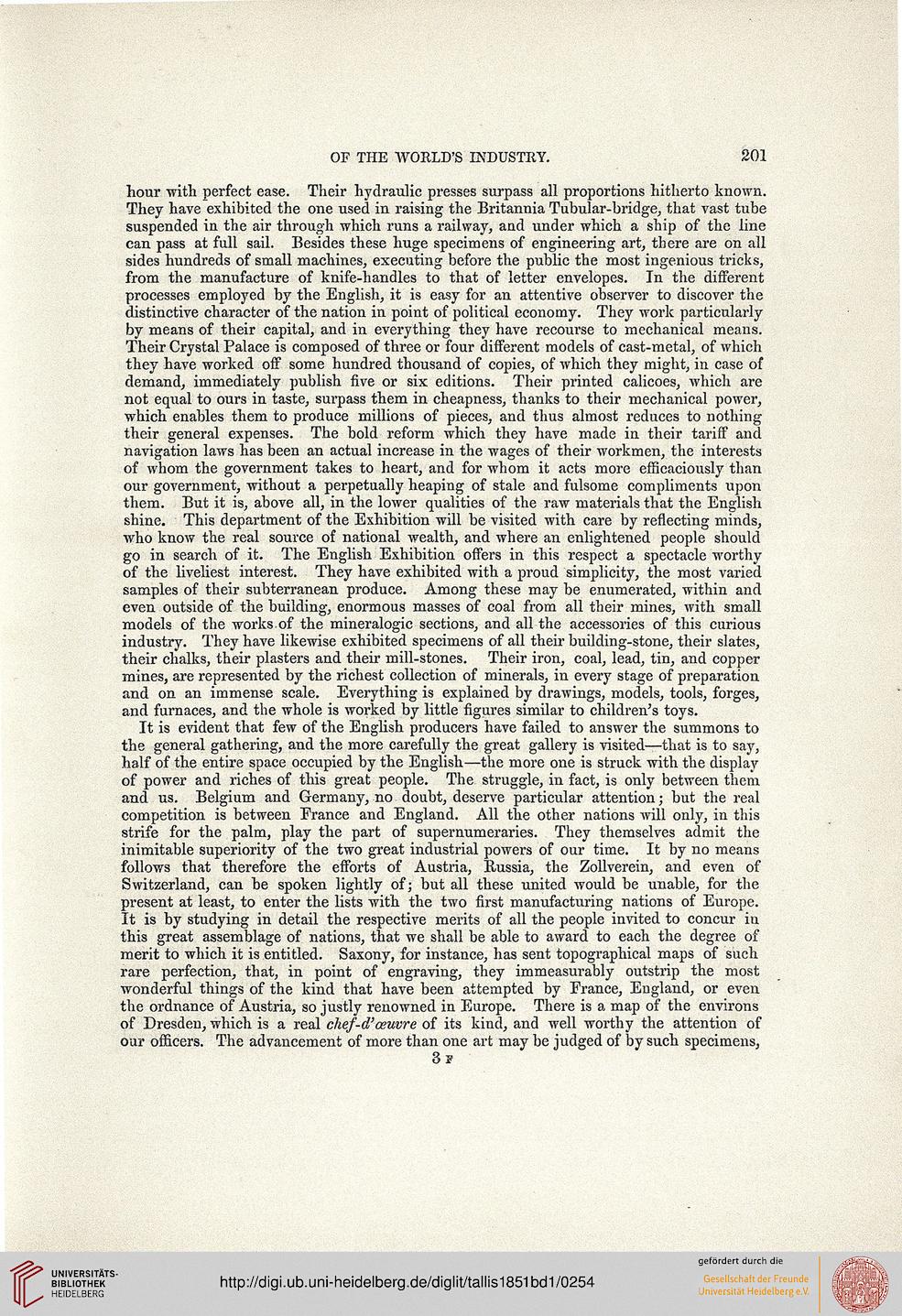 Information about OCR text
OF THE WORLD'S INDUSTRY. 201

hour with perfect ease. Their hydraulic presses surpass all proportions hitherto known.
They have exhibited the one used in raising the Britannia Tubular-bridge, that vast tube
suspended in the air through which runs a railway, and under which a ship of the line
can pass at full sail. Besides these huge specimens of engineering art, there are on all
sides hundreds of small machines, executing before the public the most ingenious tricks,
from the manufacture of knife-handles to that of letter envelopes. In the different
processes employed by the English, it is easy for an attentive observer to discover the
distinctive character of the nation in point of political economy. They work particularly
by means of their capital, and in everything they have recourse to mechanical means.
Their Crystal Palace is composed of three or four different models of cast-metal, of which
they have worked off some hundred thousand of copies, of which they might, in case of
demand, immediately publish five or six editions. Their printed calicoes, which are
not equal to ours in taste, surpass them in cheapness, thanks to their mechanical power,
which enables them to produce millions of pieces, and thus almost reduces to nothing
their general expenses. The bold reform which they have made in their tariff and
navigation laws has been an actual increase in the wages of their workmen, the interests
of whom the government takes to heart, and for whom it acts more efficaciously than
our government, without a perpetually heaping of stale and fulsome compliments upon
them. But it is, above all, in the lower qualities of the raw materials that the English
shine. This department of the Exhibition will he visited with care by reflecting minds,
who know the real source of national wealth, and where an enlightened people should
go in search of it. The English Exhibition offers in this respect a spectacle worthy
of the liveliest interest. They have exhibited with a proud simplicity, the most varied
samples of their subterranean produce. Among these may be enumerated, within and
even outside of the building, enormous masses of coal from all their mines, with small
models of the works.of the mineralogic sections, and all the accessories of this curious
industry. They have likewise exhibited specimens of all their building-stone, their slates,
their chalks, their plasters and their mill-stones. Their iron, coal, lead, tin, and copper
mines, are represented by the richest collection of minerals, in every stage of preparation
and on an immense scale. Everything is explained by drawings, models, tools, forges,
and furnaces, and the whole is worked by little figures similar to children's toys.

It is evident that few of the English producers have failed to answer the summons to
the general gathering, and the more carefully the great gallery is visited—that is to say,
half of the entire space occupied by the English—the more one is struck with the display
of power and riches of this great people. The struggle, in fact, is only between them
and us. Belgium and Germany, no doubt, deserve particular attention; but the real
competition is between Prance and England. All the other nations will only, in this
strife for the palm, play the part of supernumeraries. They themselves admit the
inimitable superiority of the two great industrial powers of our time. It by no means
follows that therefore the efforts of Austria, Russia, the Zollverein, and even of
Switzerland, can be spoken lightly of; but all these united would be unable, for the
present at least, to enter the lists with the two first manufacturing nations of Europe.
It is by studying in detail the respective merits of all the people invited to concur in
this great assemblage of nations, that we shall be able to award to each the degree of
merit to which it is entitled. Saxony, for instance, has sent topographical maps of such
rare perfection, that, in point of engraving, they immeasurably outstrip the most
wonderful things of the kind that have been attempted by Prance, England, or even
the ordnance of Austria, so justly renowned in Europe. There is a map of the environs
of Dresden, which is a real chef-d'ceuvre of its kind, and well worthy the attention of
our officers. The advancement of more than one art may be judged of by such specimens,