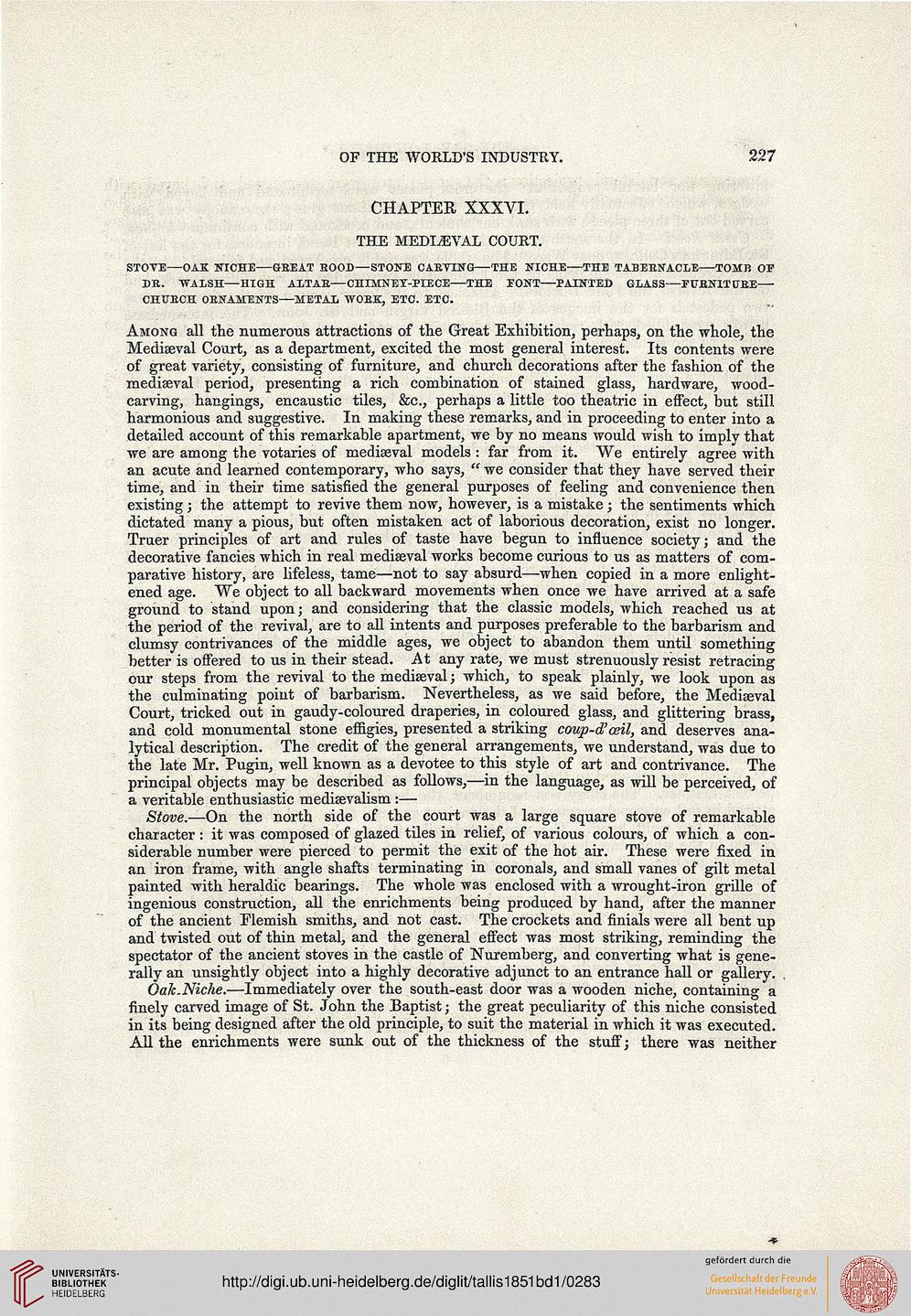 Information about OCR text
OF THE WORLD'S INDUSTRY. 227

Among all the numerous attractions of the Great Exhibition, perhaps, on the whole, the
Mediaeval Court, as a department, excited the most general interest. Its contents were
of great variety, consisting of furniture, and church decorations after the fashion of the
mediaeval period, presenting a rich combination of stained glass, hardware, -wood-
carving, hangings, encaustic tiles, &c, perhaps a little too theatric in effect, but still
harmonious and suggestive. In making these remarks, and in proceeding to enter into a
detailed account of this remarkable apartment, we by no means would wish to imply that
we are among the votaries of mediaeval models : far from it. We entirely agree with
an acute and learned contemporary, who says, " we consider that they have served their
time, and in their time satisfied the general purposes of feeling and convenience then
existing; the attempt to revive them now, however, is a mistake; the sentiments which
dictated many a pious, but often mistaken act of laborious decoration, exist no longer.
Truer principles of art and rules of taste have begun to influence society; and the
decorative fancies which in real mediaeval works become curious to us as matters of com-
parative history, are lifeless, tame—not to say absurd—when copied in a more enlight-
ened age. "We object to all backward movements when once we have arrived at a safe
ground to stand upon; and considering that the classic models, which reached us at
the period of the revival, are to all intents and purposes preferable to the barbarism and
clumsy contrivances of the middle ages, we object to abandon them until something
better is offered to us in their stead. At any rate, we must strenuously resist retracing
our steps from the revival to the mediaeval; which, to speak plainly, we look upon as
the culminating point of barbarism. Nevertheless, as we said before, the Mediaeval
Court, tricked out in gaudy-coloured draperies, in coloured glass, and glittering brass,
and cold monumental stone effigies, presented a striking coup-d'ceil, and deserves ana-
lytical description. The credit of the general arrangements, we understand, was due to
the late Mr. Pugin, well known as a devotee to this style of art and contrivance. The
principal objects may be described as follows,—in the language, as will be perceived, of
a veritable enthusiastic medievalism:—

Stove.—On the north side of the court was a large square stove of remarkable
character : it was composed of glazed tiles in relief, of various colours, of which a con-
siderable number were pierced to permit the exit of the hot air. These were fixed in
an iron frame, with angle shafts terminating in coronals, and small vanes of gilt metal
painted with heraldic hearings. The whole was enclosed with a wrought-iron grille of
ingenious construction, all the enrichments being produced by hand, after the manner
of the ancient Flemish smiths, and not cast. The crockets and finials were all bent up
and twisted out of thin metal, and the general effect was most striking, reminding the
spectator of the ancient stoves in the castle of Nuremberg, and converting what is gene-
rally an unsightly object into a highly decorative adjunct to an entrance hall or gallery.

Oak-Niche.—Immediately over the south-east door was a wooden niche, containing a
finely carved image of St. John the Baptist; the great peculiarity of this niche consisted
in its being designed after the old principle, to suit the material in which it was executed.
All the enrichments were sunk out of the thickness of the stuff; there was neither