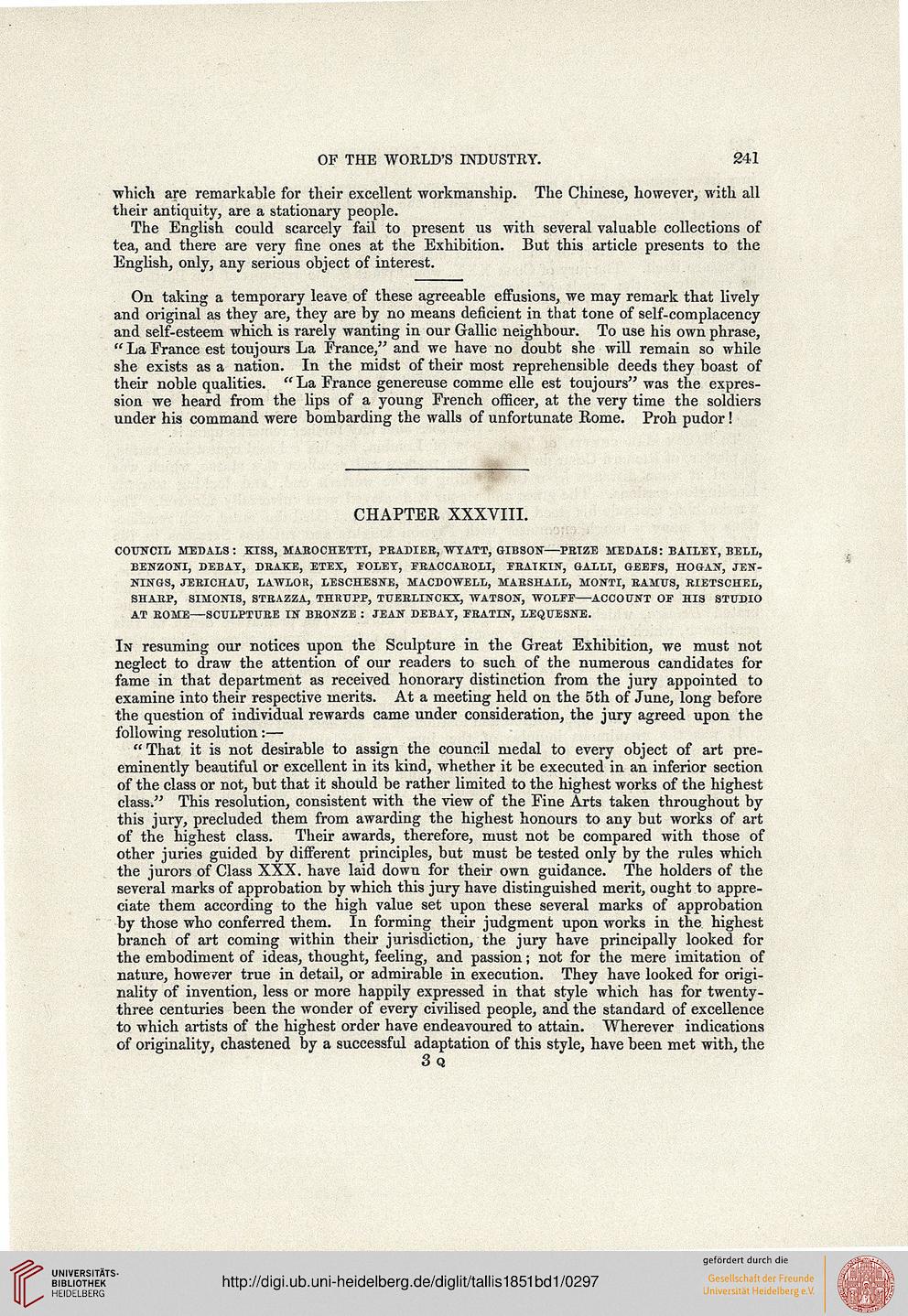 Information about OCR text
OF THE WORLD'S INDUSTRY. 241

which are remarkable for tlieir excellent ■workmanship. The Chinese, however, with all
their antiquity, are a stationary people.

The English could scarcely fail to present us with several valuable collections of
tea, and there are very fine ones at the Exhibition. But this article presents to the
English, only, any serious object of interest.

On taking a temporary leave of these agreeable effusions, we may remark that lively
and original as they are, they are by no means deficient in that tone of self-complacency
and self-esteem which is rarely wanting in our Gallic neighbour. To use his own phrase,
" La France est toujours La France," and we have no doubt she will remain so while
she exists as a nation. In the midst of their most reprehensible deeds they boast of
their noble qualities. " La France genereuse comme elle est toujours" was the expres-
sion we heard from the lips of a young French officer, at the very time the soldiers
under his command were bombarding the walls of unfortunate Rome. Proh pudor!

In resuming our notices upon the Sculpture in the Great Exhibition, we must not
neglect to draw the attention of our readers to such of the numerous candidates for
fame in that department as received honorary distinction from, the jury appointed to
examine into their respective merits. At a meeting held on the 5th of June, long before
the question of individual rewards came under consideration, the jury agreed upon the
following resolution:—

" That it is not desirable to assign the council medal to every object of art pre-
eminently beautiful or excellent in its kind, whether it be executed in an inferior section
of the class or not, but that it should be rather limited to the highest works of the highest
class*." This resolution, consistent with the view of the Fine Arts taken throughout by
this jury, precluded them from awarding the highest honours to any but works of art
of the highest class. Their awards, therefore, must not be compared with those of
other juries guided by different principles, but must be tested only by the rules which
the jurors of Class XXX. have laid down for their own guidance. The holders of the
several marks of approbation by which this jury have distinguished merit, ought to appre-
ciate them according to the high value set upon these several marks of approbation
by those who conferred them. In forming their judgment upon works in the highest
branch of art coming within their jurisdiction, the jury have principally looked for
the embodiment of ideas, thought, feeling, and passion; not for the mere imitation of
nature, however true in detail, or admirable in execution. They have looked for origi-
nality of invention, less or more happily expressed in that style which has for twenty-
three centuries been the wonder of every civilised people, and the standard of excellence
to which artists of the highest order have endeavoured to attain. Wherever indications
of originality, chastened by a successful adaptation of this style, have been met with, the