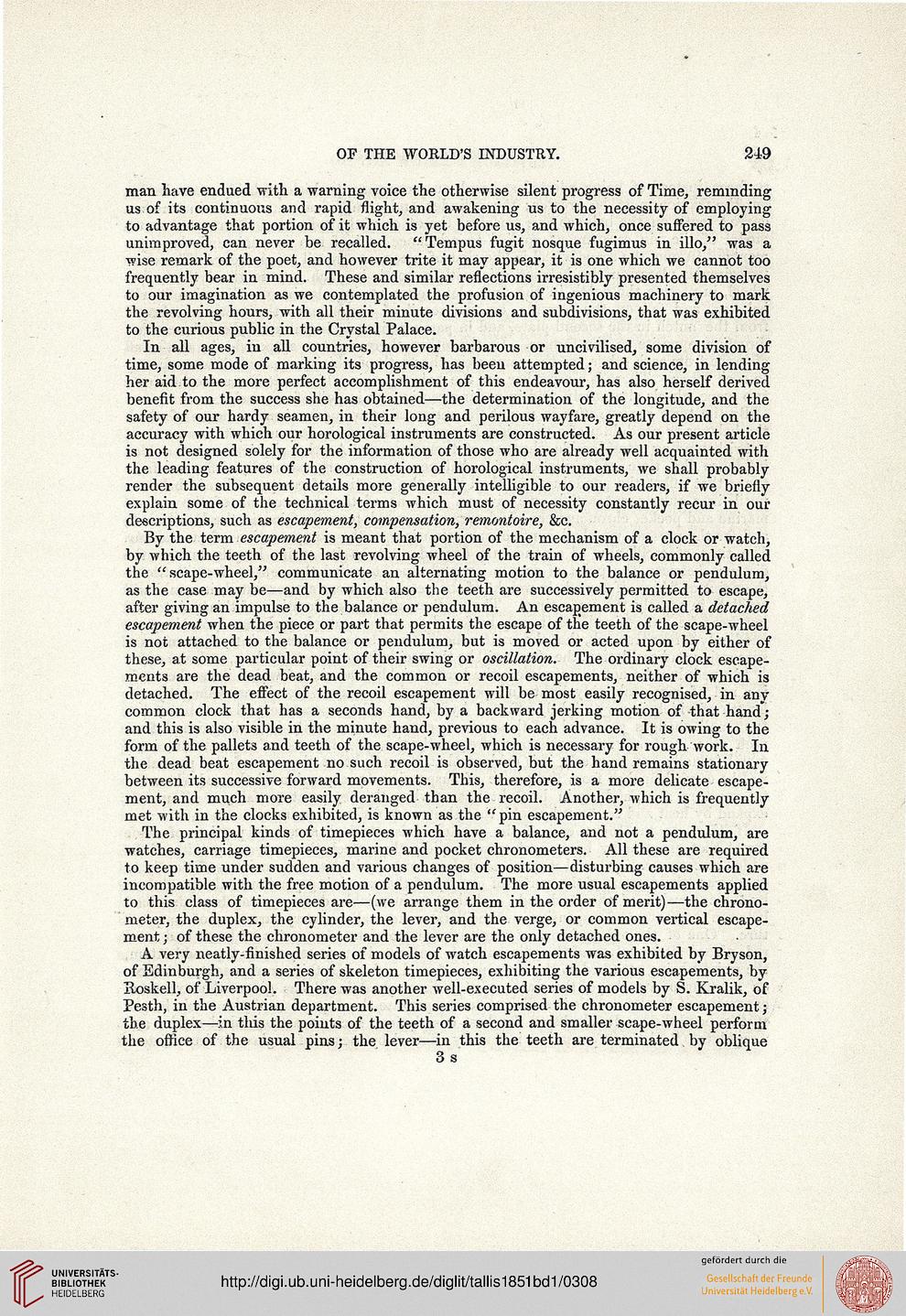 Information about OCR text
OF THE WORLD'S INDUSTRY. 249

man have endued with a warning voice the otherwise silent progress of Time, reminding
us of its continuous and rapid flight, and awakening us to the necessity of employing
to advantage that portion of it which is yet before us, and which, once suffered to pass
unimproved, can never be recalled. "Tempus fugit nosque fugimus in illo," was a
■wise remark of the poet, and however trite it may appear, it is one which we cannot too
frequently bear in mind. These and similar reflections irresistibly presented themselves
to our imagination as we contemplated the profusion of ingenious machinery to mark
the revolving hours, with all their minute divisions and subdivisions, that was exhibited
to the curious public in the Crystal Palace.

In all ages, in all countries, however barbarous or uncivilised, some division of
time, some mode of marking its progress, has been attempted; and science, in lending
her aid. to the more perfect accomplishment of this endeavour, has also herself derived
benefit from the success she has obtained—the determination of the longitude, and the
safety of our hardy seamen, in their long and. perilous wayfare, greatly depend on the
accuracy with which our horological instruments are constructed. As our present article
is not designed solely for the information of those who are already well acquainted with
the leading features of the construction of horological instruments, we shall probably
render the subsequent details more generally intelligible to our readers, if we briefly
explain some of the technical terms which must of necessity constantly recur in our
descriptions, such as escapement, compensation, remontoire, &c.

By the term escapement is meant that portion of the mechanism of a clock or watch,
by which the teeth of the last revolving wheel of the train of wheels, commonly called
the " scape-wheel," communicate an alternating motion to the balance or pendulum,
as the case may be—and by which also the teeth are successively permitted to escape,
after giving an impulse to the balance or pendulum. An escapement is called a detached
escapement when the piece or part that permits the escape of the teeth of the scape-wheel
is not attached to the balance or pendulum, but is moved or acted upon by either of
these, at some particular point of their swing or oscillation. The ordinary clock escape-
ments are the dead beat, and the common or recoil escapements, neither of which is
detached. The effect of the recoil escapement will be most easily recognised, in any
common clock that has a seconds hand, by a backward jerking motion of that hand;
and this is also visible in the minute hand, previous to each advance. It is owing to the
form of the pallets and teeth of the scape-wheel, which is necessary for rough work. In
the dead beat escapement no such recoil is observed, but the hand remains stationary
between its successive forward movements. This, therefore, is a more delicate escape-
ment, and much more easily deranged than the recoil. Another, which is frequently
met with in the clocks exhibited, is known as the <fpin escapement."

The principal kinds of timepieces which have a balance, and not a pendulum, are
watches, carriage timepieces, marine and pocket chronometers. All these are required
to keep time under sudden and various changes of position—disturbing causes which are
incompatible with the free motion of a pendulum. The more usual escapements applied
to this class of timepieces are—(we arrange them in the order of merit)—the chrono-
meter, the duplex, the cylinder, the lever, and the verge, or common vertical escape-
ment j of these the chronometer and the lever are the only detached ones.

A very neatly-finished series of models of watch escapements was exhibited by Bryson,
of Edinburgh, and a series of skeleton timepieces, exhibiting the various escapements, by
Koskell, of Liverpool. There was another well-executed series of models by S. Kralik, of
Pesth, in the Austrian department. This series comprised the chronometer escapement;
the duplex—in tins the points of the teeth of a second and smaller scape-wheel perform
the office of the usual pins; the lever—in this the teeth are terminated by oblique