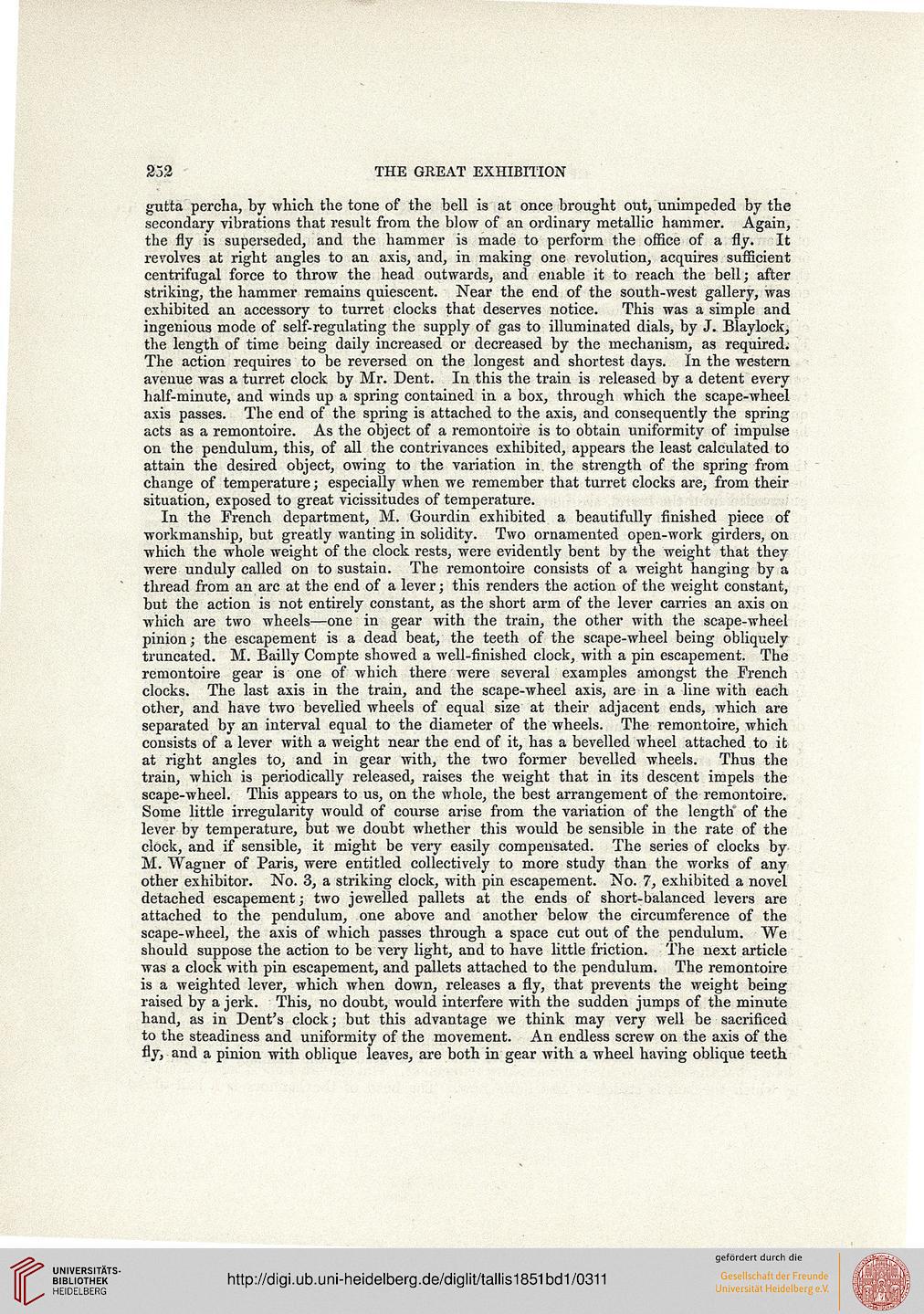 gutta percha, by which the tone of the bell is at once brought out, unimpeded by the
secondary vibrations that result from, the blow of an ordinary metallic hammer. Again,
the fly is superseded, and the hammer is made to perform the office of a fly. It
revolves at right angles to an axis, and, in making one revolution, acquires sufficient
centrifugal force to throw the head outwards, and enable it to reach the bell; after
striking, the hammer remains quiescent. Near the end of the south-west gallery, was
exhibited an accessory to turret clocks that deserves notice. This was a simple and
ingenious mode of self-regulating the supply of gas to illuminated dials, by J. Blaylock,
the length of time being daily increased or decreased by the mechanism, as required;
The action requires to be reversed on the longest and shortest days. In the western
avenue was a turret clock by Mr. Dent. In this the train is released by a detent every
half-minute, and winds up a spring contained in a box, through which the scape-wheel
axis passes. The end of the spring is attached to the axis, and consequently the spring
acts as a remontoire. As the object of a remontoire is to obtain uniformity of impulse
on the pendulum, this, of all the contrivances exhibited, appears the least calculated to
attain the desired object, owing to the variation in. the strength of the spring from
change of temperature; especially when we remember that turret clocks are, from their
situation, exposed to great vicissitudes of temperature.

In the French department, M. Gourdin exhibited a beautifully finished piece of
workmanship, but greatly wanting in solidity. Two ornamented open-work girders, on
which the whole weight of the clock rests, were evidently bent by the weight that they
were unduly called on to sustain. The remontoire consists of a weight hanging by a
thread from an arc at the end of a lever; this renders the action of the weight constant,
but the action is not entirely constant, as the short arm of the lever carries an axis on
which are two wheels—one in gear with the train, the other with the scape-wheel
pinion; the escapement is a dead beat, the teeth of the scape-wheel being obliquely
truncated. M. Bailly Compte showed a well-finished clock, with a pin escapement. The
remontoire gear is one of which there were several examples amongst the French
clocks. The last axis in the train, and the scape-wheel axis, are in a line with each
other, and have two bevelled wheels of equal size at their adjacent ends, which are
separated by an interval equal to the diameter of the wheels. The remontoire, which
consists of a lever with a weight near the end of it, has a bevelled wheel attached to it
at right angles to, and iu gear with, the two former bevelled wheels. Thus the
train, which is periodically released, raises the weight that in its descent impels the
scape-wheel. This appears to us, on the whole, the best arrangement of the remontoire.
Some little irregularity would of course arise from the variation of the length' of the
lever hy temperature, but we doubt whether this would be sensible in the rate of the
clock, and if sensible, it might be very easily compensated. The series of clocks by
M. Wagner of Paris, were entitled collectively to more study than the works of any
other exhibitor. No. 3, a striking clock, with pin escapement. No. 7, exhibited a novel
detached escapement; two jewelled pallets at the ends of short-balanced levers are
attached to the pendulum, one above and another below the circumference of the
scape-wheel, the axis of which passes through a space cut out of the pendulum. "We
should suppose the action to be very light, and to have little friction. The next article
was a clock with pin escapement, and pallets attached to the pendulum. The remontoire
is a weighted lever, which when down, releases a fly, that prevents the weight being
raised by a jerk. This, no doubt, would interfere with the sudden jumps of the minute
hand, as in Dent's clock; but this advantage we think may very well be sacrificed
to the steadiness and uniformity of the movement. An endless screw on the axis of the
fly, and a pinion with oblique leaves, are both in gear with a wheel having oblique teeth