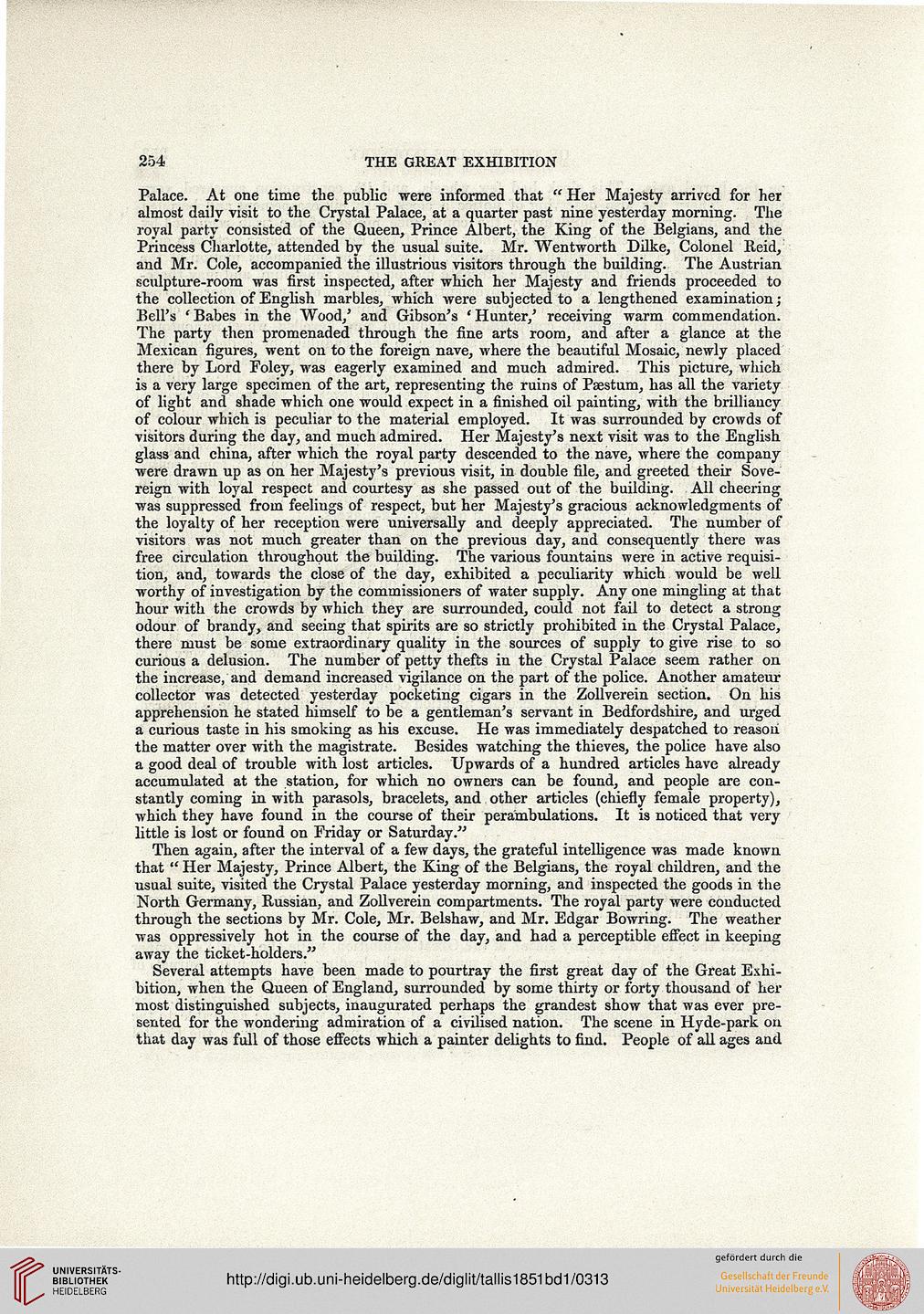 Palace. At one time the public were informed that " Her Majesty arrived for her
almost daily visit to the Crystal Palace, at a quarter past nine yesterday morning. The
royal party consisted of the Queen, Prince Albert, the King of the Belgians, and the
Princess Charlotte, attended by the usual suite. Mr. Wentworth Dilke, Colonel Reid,:
and Mr. Cole, accompanied the illustrious visitors through the building. The Austrian
sculpture-room was first inspected, after which her Majesty and friends proceeded to
the collection of English marbles, which were subjected to a lengthened examination ;
Bell's ' Babes in the "Wood/ and Gibson's ' Hunter,' receiving warm commendation.
The party then promenaded through the fine arts room, and after a glance at the
Mexican figures, went on to the foreign nave, where the beautiful Mosaic, newly placed
there by Lord Foley, was eagerly examined and much admired. This picture, which
is a very large specimen of the art, representing the ruins of Psestum, has all the variety
of light and shade which one would expect in a finished oil painting, with the brilliancy
of colour which is peculiar to the material employed. It was surrounded by crowds of
visitors during the day, and much admired. Her Majesty's next visit was to the English
glass and china, after which the royal party descended to the nave, where the company
were drawn up as on her Majesty's previous visit, in double file, and greeted their Sove-
reign with loyal respect and courtesy as she passed out of the building. All cheering
was suppressed from feeliugs of respect, but her Majesty's gracious acknowledgments of
the loyalty of her reception were universally and deeply appreciated. The number of
visitors was not much greater than on the previous day, and consequently there was
free circulation throughout the building. The various fountains were in active requisi-
tion, and, towards the close of the day, exhibited a peculiarity which would be well
worthy of investigation by the commissioners of water supply. Any one mingling at that
hour with the crowds by which they are surrounded, could not fail to detect a strong
odour of brandy, and seeing that spirits are so strictly prohibited in the Crystal Palace,
there must be some extraordinary quality in the sources of supply to give rise to so
curious a delusion. The number of petty thefts in the Crystal Palace seem rather on
the increase, and demand increased vigilance on the part of the police. Another amateur
collector was detected yesterday pocketing cigars in the Zollverein section. On his
apprehension he stated himself to be a gentleman's servant in Bedfordshire, and urged
a curious taste in his smoking as his excuse. He was immediately despatched to reason
the matter over with the magistrate. Besides watching the thieves, the police have also
a good deal of trouble with lost articles. Upwards of a hundred articles have already
accumulated at the station, for which no owners can be found, and people are con-
stantly coming in with parasols, bracelets, and other articles (chiefly female property),
which they have found in the course of their perambulations. It is noticed that very
little is lost or found on Friday or Saturday."

Then again, after the interval of a few days, the grateful intelligence was made known
that " Her Majesty, Prince Albert, the King of the Belgians, the royal children, and the
usual suite, visited the Crystal Palace yesterday morning, and inspected the goods in the
North Germany, Russian, and Zollverein compartments. The royal party were conducted
through the sections by Mr. Cole, Mr. Belshaw, and Mr. Edgar Bowring. The weather
was oppressively hot in the course of the day, and had a perceptible effect in keeping
away the ticket-holders."

Several attempts have been made to pourtray the first great day of the Great Exhi-
bition, when the Queen of England, surrounded by some thirty or forty thousand of her
most distinguished subjects, inaugurated perhaps the grandest show that was ever pre-
sented for the wondering admiration of a civilised nation. The scene in Hyde-park on
that day was full of those effects which a painter delights to find. People of all ages and