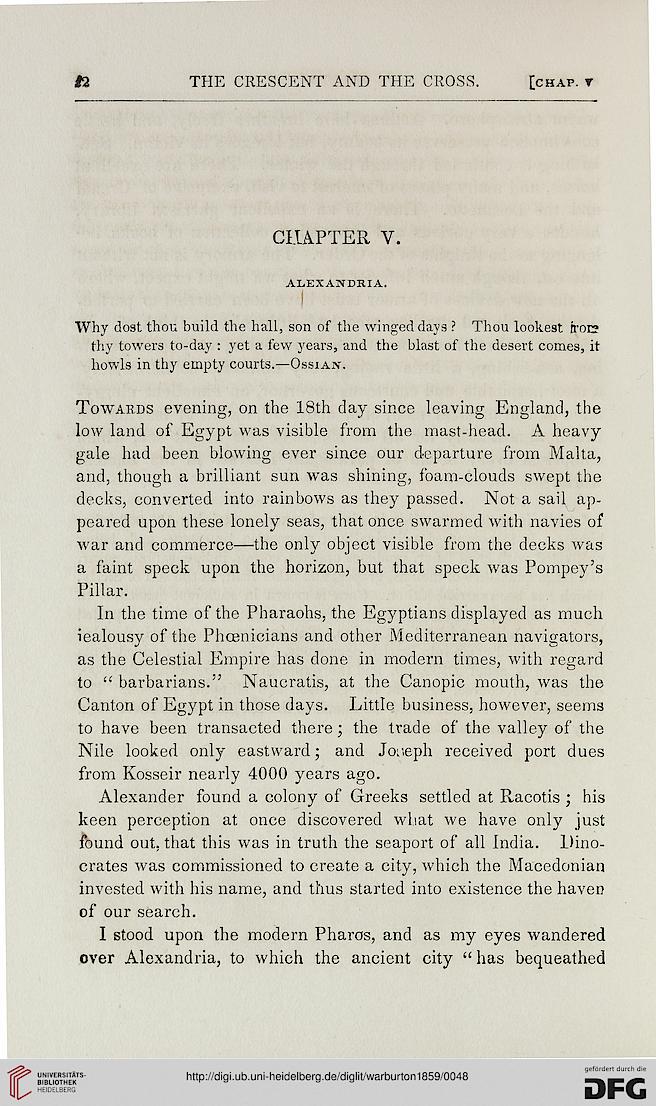 Why dost thou build the hall, son of the winged days ? Thou lookest iron?
thy towers to-day : yet a few years, and the blast of the desert comes, it
howls in thy empty courts.—Ossiait.

Towards evening, on the 18th day since leaving England, the
low land of Egypt was visible from the mast-head. A heavy
gale had been blowing ever since our departure from Malta,
and, though a brilliant sun was shining, foam-clouds swept the
decks, converted into rainbows as they passed. Not a sail ap-
peared upon these lonely seas, that once swarmed with navies of
war and commerce—the only object visible from the decks was
a faint speck upon the horizon, but that speck was Pompey's
Pillar.

In the time of the Pharaohs, the Egyptians displayed as much
iealousy of the Phoenicians and other Mediterranean navigators,
as the Celestial Empire has done in modern times, with regard
to " barbarians." Naucratis, at the Canopic mouth, was the
Canton of Egypt in those days. Little business, however, seems
to have been transacted there ; the trade of the valley of the
Nile looked only eastward; and Joseph received port dues
from Kosseir nearly 4000 years ago.

Alexander found a colony of Greeks settled at Racotis ; his
keen perception at once discovered what we have only just
found out. that this was in truth the seaport of all India. Dino-
crates was commissioned to create a city, which the Macedonian
invested with his name, and thus started into existence the haven
of our search.

I stood upon the modern Pharos, and as my eyes wandered
over Alexandria, to which the ancient city " has bequeathed