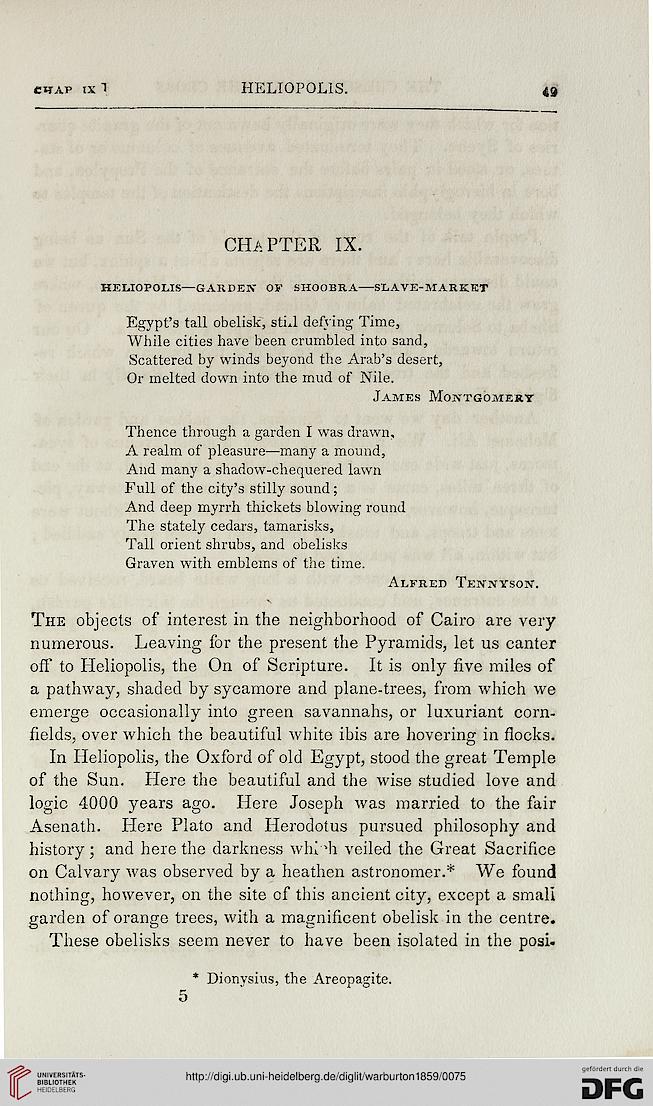 Egypt's tall obelisk, stLl defy ing Time,
While cities have been crumbled into sand,
Scattered by winds beyond the Arab's desert,
Or melted down into the mud of Nile.

Thence through a garden I was drawn,
A realm of pleasure—many a mound,
And many a shadow-chequered lawn
Full of the city's stilly sound;
And deep myrrh thickets blowing round
The stately cedars, tamarisks,
Tall orient shrubs, and obelisks
Graven with emblems of the time.

The objects of interest in the neighborhood of Cairo are very
numerous. Leaving for the present the Pyramids, let us canter
off to Heliopolis, the On of Scripture. It is only five miles of
a pathway, shaded by sycamore and plane-trees, from which we
emerge occasionally into green savannahs, or luxuriant corn-
fields, over which the beautiful white ibis are hovering in flocks.

In Heliopolis, the Oxford of old Egypt, stood the great Temple
of the Sun. Here the beautiful and the wise studied love and
logic 4000 years ago. Here Joseph was married to the fair
Asenath. Here Plato and Herodotus pursued philosophy and
history ; and here the darkness whl:>h veiled the Great Sacrifice
on Calvary was observed by a heathen astronomer.* We found
nothing, however, on the site of this ancient city, except a small
garden of orange trees, with a magnificent obelisk in the centre.

These obelisks seem never to have been isolated in the posi.