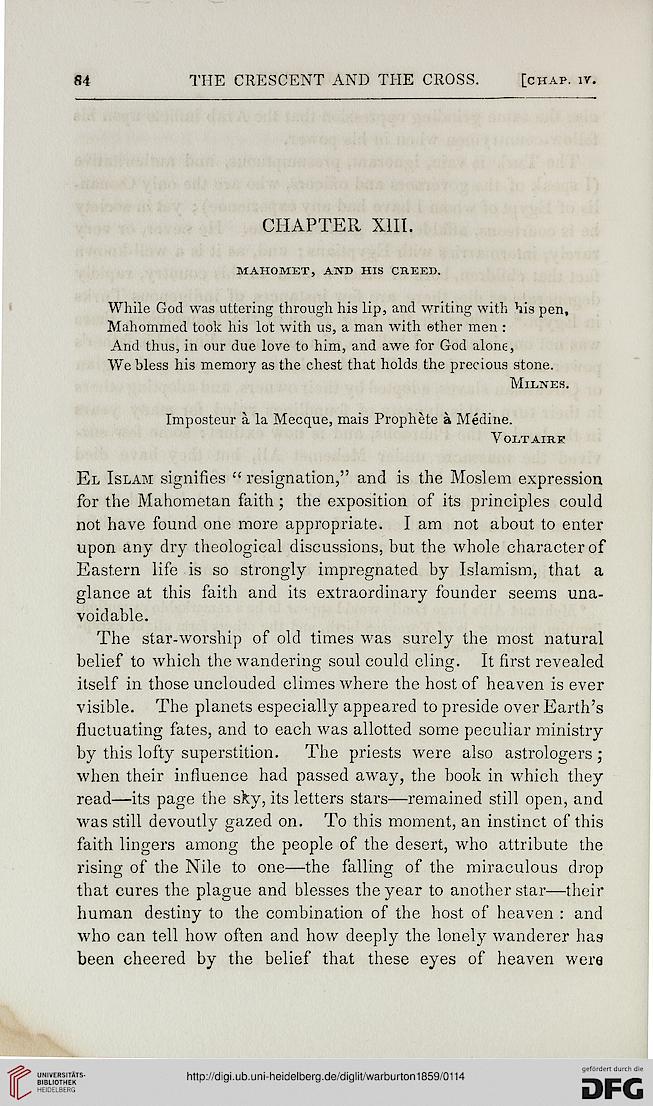 THE CRESCENT AND THE CROSS. [chap. iv.

mahomet, and his creed.

While God was uttering through his lip, and writing with his pen,

Mahommed took his lot with us, a man with ether men :

And thus, in our due love to him, and awe for God alone,

We bless his memory as the chest that holds the precious stone.

El Islam signifies " resignation," and is the Moslem expression
for the Mahometan faith 5 the exposition of its principles could
not have found one more appropriate. I am not about to enter
upon any dry theological discussions, but the whole character of
Eastern life is so strongly impregnated by Islamism, that a
glance at this faith and its extraordinary founder seems una-
voidable.

The star-worship of old times was surely the most natural
belief to which the wandering soul could cling. It first revealed
itself in those unclouded climes where the host of heaven is ever
visible. The planets especially appeared to preside over Earth's
fluctuating fates, and to each was allotted some peculiar ministry
by this lofty superstition. The priests were also astrologers ;
when their influence had passed away, the book in which they
read—its page the sky, its letters stars—remained still open, and
was still devoutly gazed on. To this moment, an instinct of this
faith lingers among the people of the desert, who attribute the
rising of the Nile to one—the falling of the miraculous drop
that cures the plague and blesses the year to another star—their
human destiny to the combination of the host of heaven : and
who can tell how often and how deeply the lonely wanderer has
been cheered by the belief that these eyes of heaven were