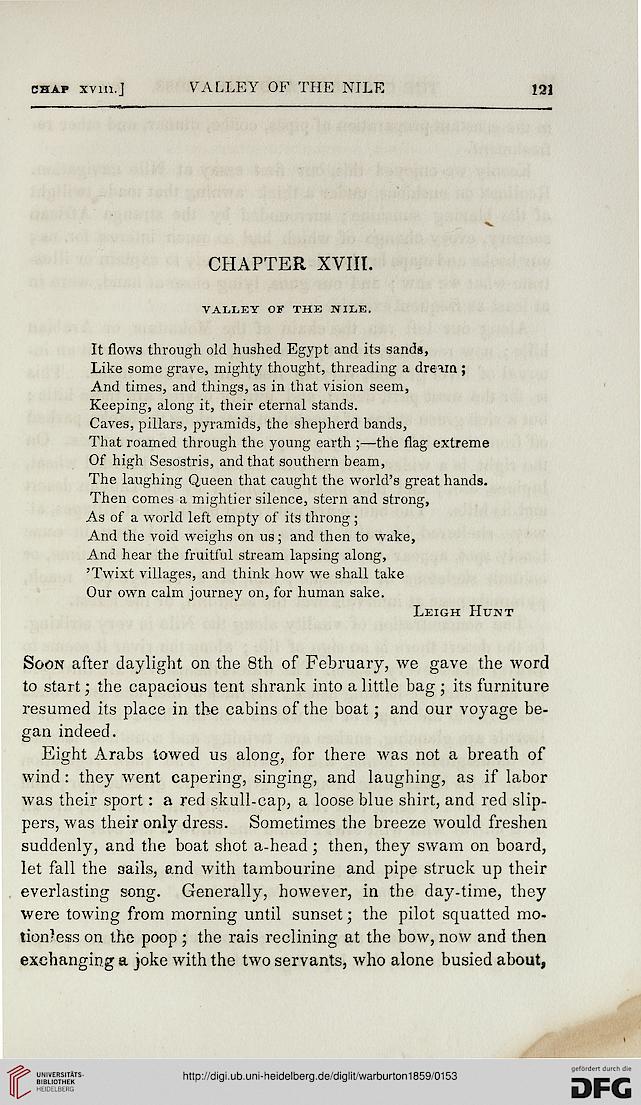 VALLEY OF THE NILE

valley of the nile.

It flows through old hushed Egypt and its sands,
Like some grave, mighty thought, threading a dream ;
And times, and things, as in that vision seem,
Keeping, along it, their eternal stands.
Caves, pillars, pyramids, the shepherd bands,
That roamed through the young earth ;—the flag extreme
Of high Sesostris, and that southern beam,
The laughing Queen that caught the world's great hands.
Then comes a mightier silence, stern and strong,
As of a world left empty of its throng ;
And the void weighs on us; and then to wake,
And hear the fruitful stream lapsing along,
'Twixt villages, and think how we shall take
Our own calm journey on, for human sake.

Soon after daylight on the 8th of February, we gave the word
to start; the capacious tent shrank into a little bag ; its furniture
resumed its place in the cabins of the boat; and our voyage be-
gan indeed.

Eight Arabs towed us along, for there was not a breath of
wind: they went capering, singing, and laughing, as if labor
was their sport: a red skull-cap, a loose blue shirt, and red slip-
pers, was their only dress. Sometimes the breeze would freshen
suddenly, and the boat shot a-head; then, they swam on board,
let fall the sails, and with tambourine and pipe struck up their
everlasting song. Generally, however, in the day-time, they
were towing from morning until sunset; the pilot squatted mo-
tion-ess on the poop ; the rais reclining at the bow, now and then
exchanging a joke with the two servants, who alone busied about,