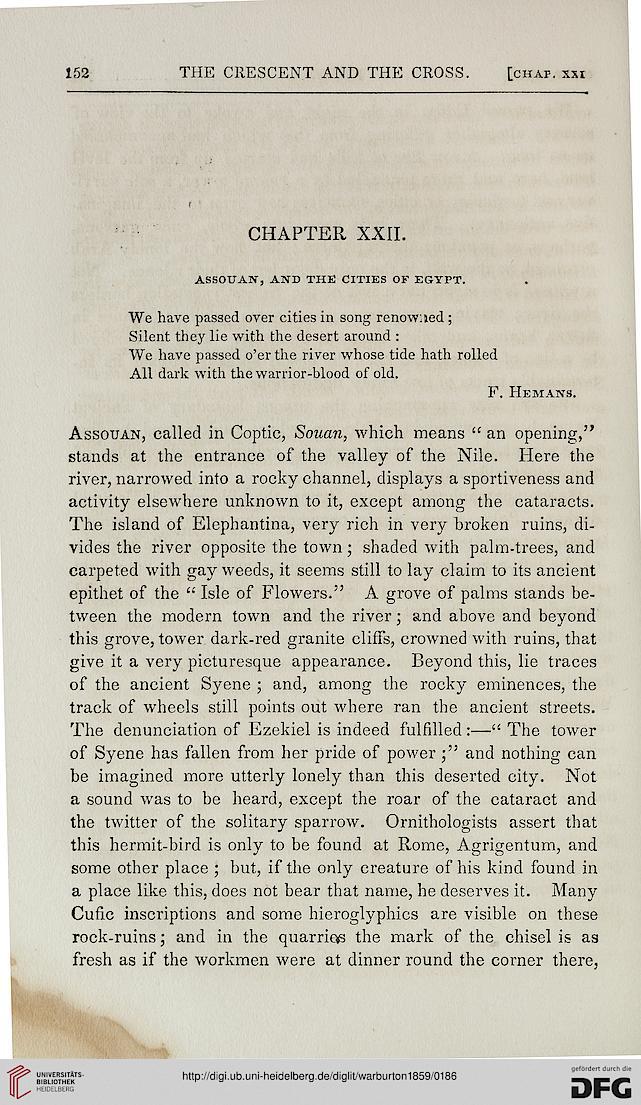 assouan, and the cities of egypt.

We have passed over cities in song renowned;
Silent they lie with the desert around :
We have passed o'er the river whose tide hath rolled
All dark with the warrior-blood of old.

Assouan, called in Coptic, Souan, which means " an opening,"
stands at the entrance of the valley of the Nile. Here the
river, narrowed into a rocky channel, displays a sportiveness and
activity elsewhere unknown to it, except among the cataracts.
The island of Elephantina, very rich in very hroken ruins, di-
vides the river opposite the town; shaded with palm-trees, and
carpeted with gay weeds, it seems still to lay claim to its ancient
epithet of the " Isle of Flowers." A grove of palms stands be-
tween the modern town and the river j and above and beyond
this grove, tower dark-red granite cliffs, crowned with ruins, that
give it a very picturesque appearance. Beyond this, lie traces
of the ancient Syene ; and, among the rocky eminences, the
track of wheels still points out where ran the ancient streets.
The denunciation of Ezekiel is indeed fulfilled:—" The tower
of Syene has fallen from her pride of power ;" and nothing can
be imagined more utterly lonely than this deserted city. Not
a sound was to be heard, except the roar of the cataract and
the twitter of the solitary sparrow. Ornithologists assert that
this hermit-bird is only to be found at Rome, Agrigentum, and
some other place ; but, if the only creature of his kind found in
a place like this, does not bear that name, he deserves it. Many
Cufic inscriptions and some hieroglyphics are visible on these
rock-ruins; and in the quarries the mark of the chisel is as
fresh as if the workmen were at dinner round the corner there,