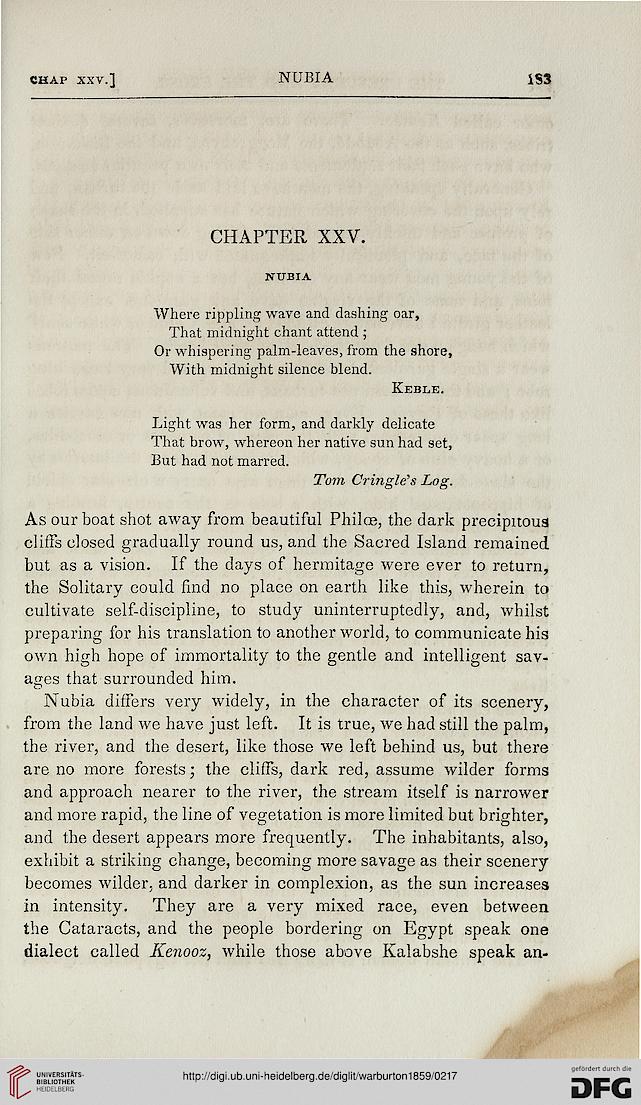 Where rippling wave and dashing oar,

That midnight chant attend ;
Or whispering palm-leaves, from the shore,

Light was her form, and darkly delicate
That brow, whereon her native sun had set,
But had not marred.

As our boat shot away from beautiful Philce, the dark precipitous
cliffs closed gradually round us, and the Sacred Island remained
but as a vision. If the days of hermitage were ever to return,
the Solitary could find no place on earth like this, wherein to
cultivate self-discipline, to study uninterruptedly, and, whilst
preparing for his translation to another world, to communicate his
own high hope of immortality to the gentle and intelligent sav-
ages that surrounded him.

Nubia differs very widely, in the character of its scenery,
from the land we have just left. It is true, we had still the palm,
the river, and the desert, like those we left behind us, but there
are no more forests; the cliffs, dark red, assume wilder forms
and approach nearer to the river, the stream itself is narrower
and more rapid, the line of vegetation is more limited but brighter,
and the desert appears more frequently. The inhabitants, also,
exhibit a striking change, becoming more savage as their scenery
becomes wilder, and darker in complexion, as the sun increases
in intensity. They are a very mixed race, even between
the Cataracts, and the people bordering on Egypt speak one
dialect called Kenooz, while those above Kalabshe speak an-