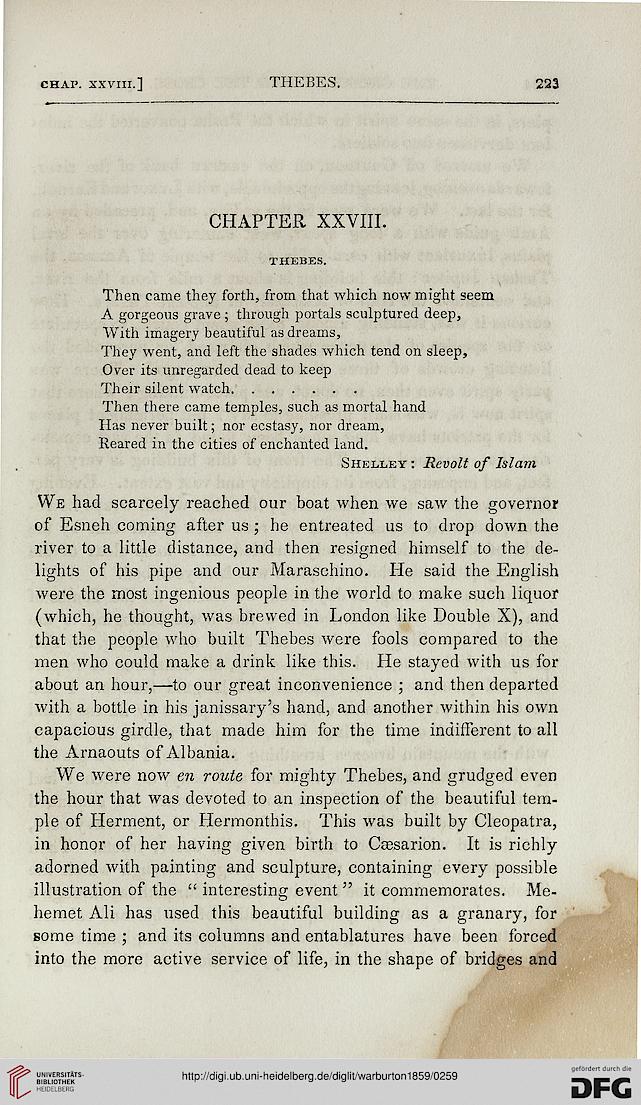 Then came they forth, from that which now might seem
A gorgeous grave; through portals sculptured deep,
With imagery beautiful as dreams,
They went, and left the shades which tend on sleep,
Over its unregarded dead to keep

Then there came temples, such as mortal hand
Has never built; nor ecstasy, nor dream,
Reared in the cities of enchanted land.

We had scarcely reached our boat when we saw the governor
of Esneh coming after us ; he entreated us to drop down the
river to a little distance, and then resigned himself to the de-
lights of his pipe and our Maraschino. He said the English
were the most ingenious people in the world to make such liquor
(which, he thought, was brewed in London like Double X), and
that the people who built Thebes were fools compared to the
men who could make a drink like this. He stayed with us for
about an hour,—to our great inconvenience ; and then departed
with a bottle in his janissary's hand, and another within his own
capacious girdle, that made him for the time indifferent to all
the Arnaouts of Albania.

We were now en route for mighty Thebes, and grudged even
the hour that was devoted to an inspection of the beautiful tem-
ple of Herment, or Hermonthis. This was built by Cleopatra,
in honor of her having given birth to CEesarion. It is richly
adorned with painting and sculpture, containing every possible
illustration of the " interesting event " it commemorates. Me-
hemet Ali has used this beautiful building as a granary, for
some time ; and its columns and entablatures have been forced
into the more active service of life, in the shape of bridges and