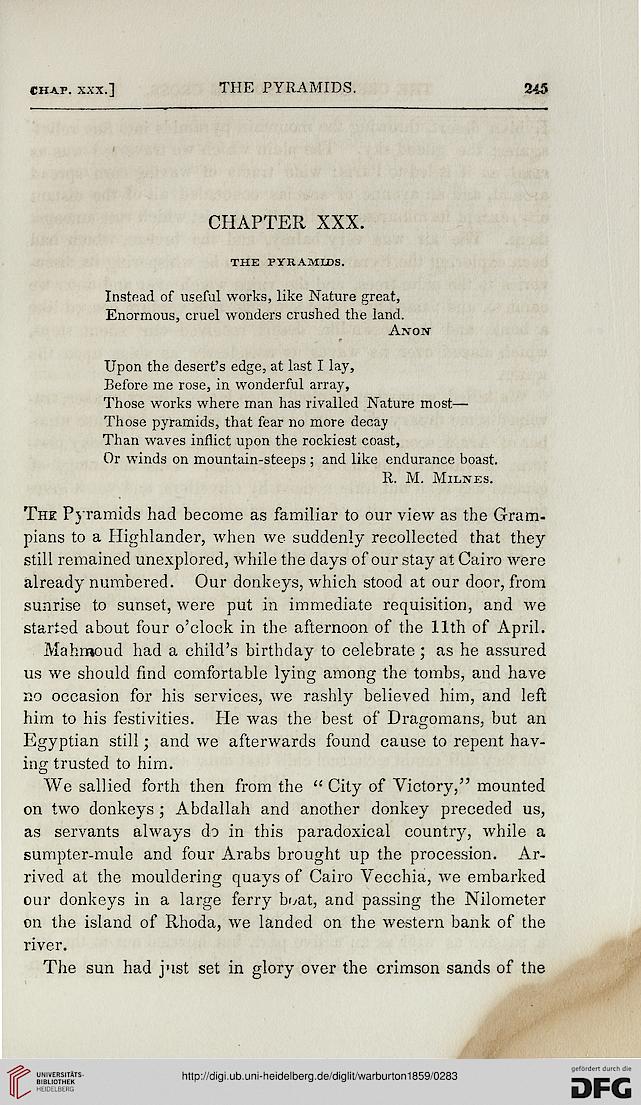 Instead of useful works, like Nature great,
Enormous, cruel wonders crushed the land.

Upon the desert's edge, at last I lay,

Before me rose, in wonderful array,

Those works where man has rivalled Nature most—

Those pyramids, that fear no more decay

Than waves inflict upon the rockiest coast,

The Pyramids had become as familiar to our view as the Gram-
pians to a Highlander, when we suddenly recollected that they
still remained unexplored, while the days of our stay at Cairo were
already numbered. Our donkeys, which stood at our door, from
sunrise to sunset, were put in immediate requisition, and we
started about four o'clock in the afternoon of the 11th of April.

Mahrnoud had a child's birthday to celebrate; as he assured
us we should find comfortable lying among the tombs, and have
no occasion for his services, we rashly believed him, and left
him to his festivities. He was the best of Dragomans, but an
Egyptian still; and we afterwards found cause to repent hav-
ing trusted to him.

We sallied forth then from the " City of Victory," mounted
on two donkeys ; Abdallah and another donkey preceded us,
as servants always do in this paradoxical country, while a
sumpter-mule and four Arabs brought up the procession. Ar-
rived at the mouldering quays of Cairo Vecchia, we embarked
our donkeys in a large ferry boat, and passing the Nilometer
on the island of Rhoda, we landed on the western bank of the
river.