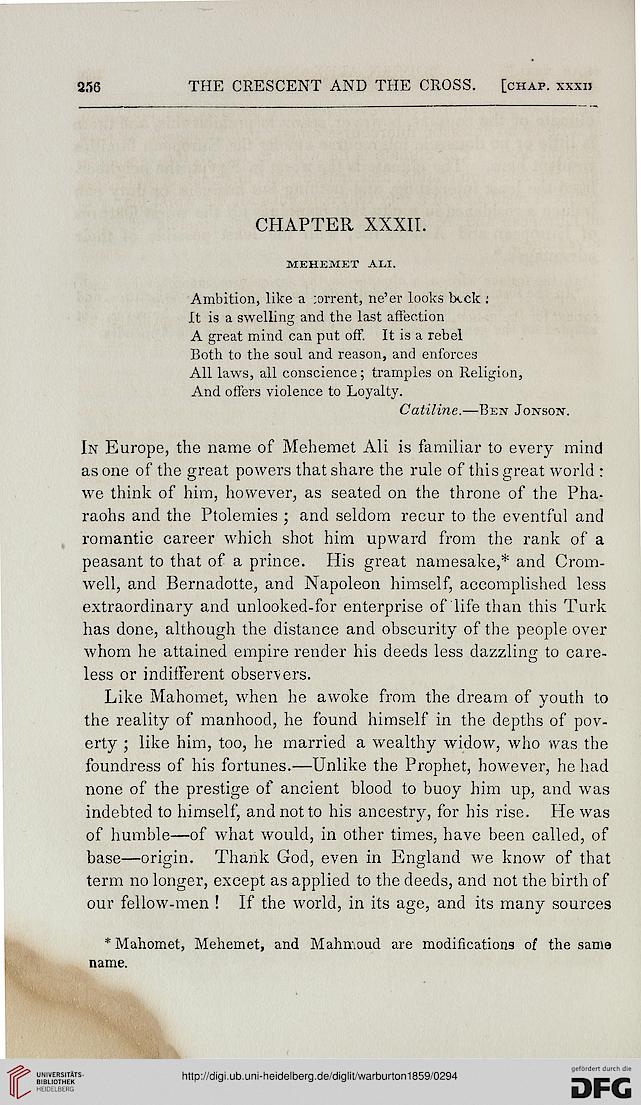 THE CRESCENT AND THE CROSS. [chap, xxxij

Ambition, like a ;orrent, ne'er looks Ixck :
It is a swelling and the last affection
A great mind can put off. It is a rebel
Both to the soul and reason, and enforces
All laws, all conscience; tramples on Religion,
And offers violence to Loyalty.

In Europe, the name of Mehemet Ali is familiar to every mind
as one of the great powers that share the rule of this great world :
we think of him, however, as seated on the throne of the Pha-
raohs and the Ptolemies ; and seldom recur to the eventful and
romantic career which shot him upward from the rank of a
peasant to that of a prince. His great namesake,* and Crom-
well, and Bernadotte, and Napoleon himself, accomplished less
extraordinary and unlooked-for enterprise of life than this Turk
has done, although the distance and obscurity of the people over
whom he attained empire render his deeds less dazzling to care-
less or indifferent observers.

Like Mahomet, when he awoke from the dream of youth to
the reality of manhood, he found himself in the depths of pov-
erty ; like him, too, he married a wealthy widow, who was the
foundress of his fortunes.—Unlike the Prophet, however, he had
none of the prestige of ancient blood to buoy him up, and was
indebted to himself, and not to his ancestry, for his rise. He was
of humble—of what would, in other times, have been called, of
base—origin. Thank God, even in England we know of that
term no longer, except as applied to the deeds, and not the birth of
our fellow-men ! If the world, in its age, and its many sources

* Mahomet, Mehemet, and Mahmoud are modifications of the same
name.