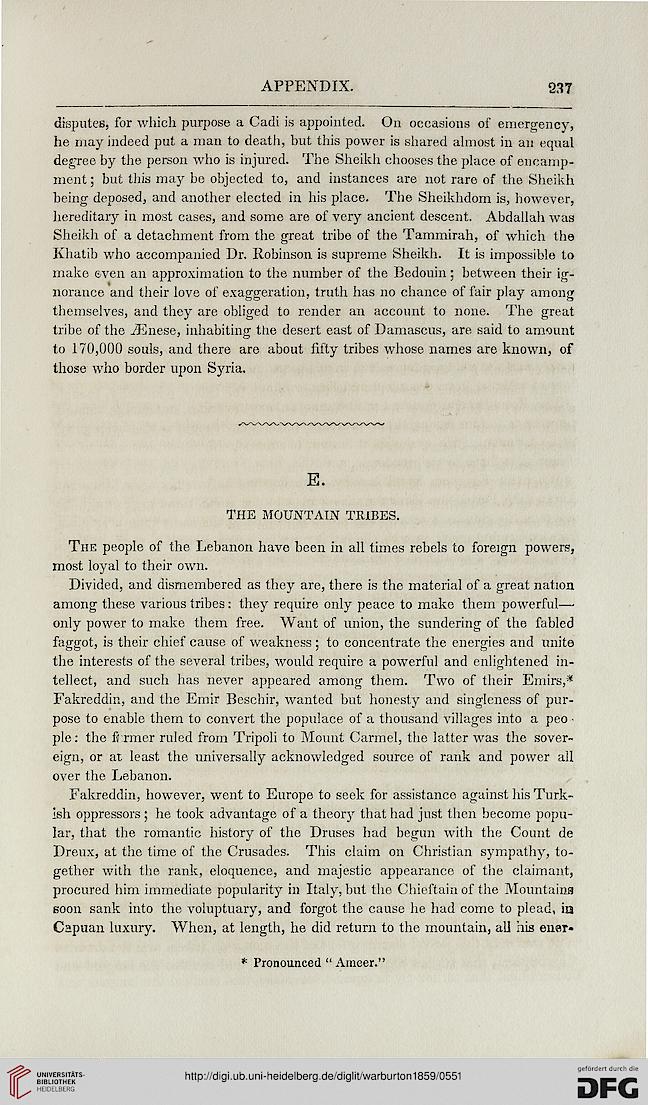 disputes, for which purpose a Cadi is appointed. On occasions of emergency,
he may indeed put a man to death, but this power is shared almost in an equal
degree by the person who is injured. The Sheikh chooses the place of encamp-
ment ; but this may be objected to, and instances are not rare of the Sheikh
being deposed, and another elected in his place. The Sheikhdom is, however,
hereditary in most cases, and some are of very ancient descent. Abdallah was
Sheikh of a detachment from the great tribe of the Tammirah, of which the
Khatib who accompanied Dr. Robinson is supreme Sheikh. It is impossible to
make even an approximation to the number of the Bedouin; between their ig-
norance and their love of exaggeration, truth has no chance of fair play among
themselves, and they are obliged to render an account to none. The great
tribe of the iEnese, inhabiting the desert east of Damascus, are said to amount
to 170,000 souls, and there are about fifty tribes whose names are known, of
those who border upon Syria.

The people of the Lebanon have been in all times rebels to foreign powers,
most loyal to their own.

Divided, and dismembered as they are, there is the material of a great nation
among these various tribes: they require only peace to make them powerful—
only power to make them free. Want of union, the sundering of the fabled
faggot, is their chief cause of weakness ; to concentrate the energies and unite
the interests of the several tribes, would require a powerful and enlightened in-
tellect, and such has never appeared among them. Two of their Emirs,*
Fakreddin, and the Emir Beschir, wanted but honesty and singleness of pur-
pose to enable them to convert the populace of a thousand villages into a peo ■
pie: the fi rmer ruled from Tripoli to Mount Carmel, the latter was the sover-
eign, or at least the universally acknowledged source of rank and power all
over the Lebanon.

Fakreddin, however, went to Europe to seek for assistance against his Turk-
ish oppressors ; he took advantage of a theory that had just then become popu-
lar, that the romantic history of the Druses had begun with the Count de
Dreux, at the time of the Crusades. This claim on Christian sympathy, to-
gether with the rank, eloquence, and majestic appearance of the claimant,
procured him immediate popularity in Italy, but the Chieftain of the Mountains
soon sank into the voluptuary, and forgot the cause he had come to plead, ia
Capuan luxury. When, at length, he did return to the mountain, all his ener«