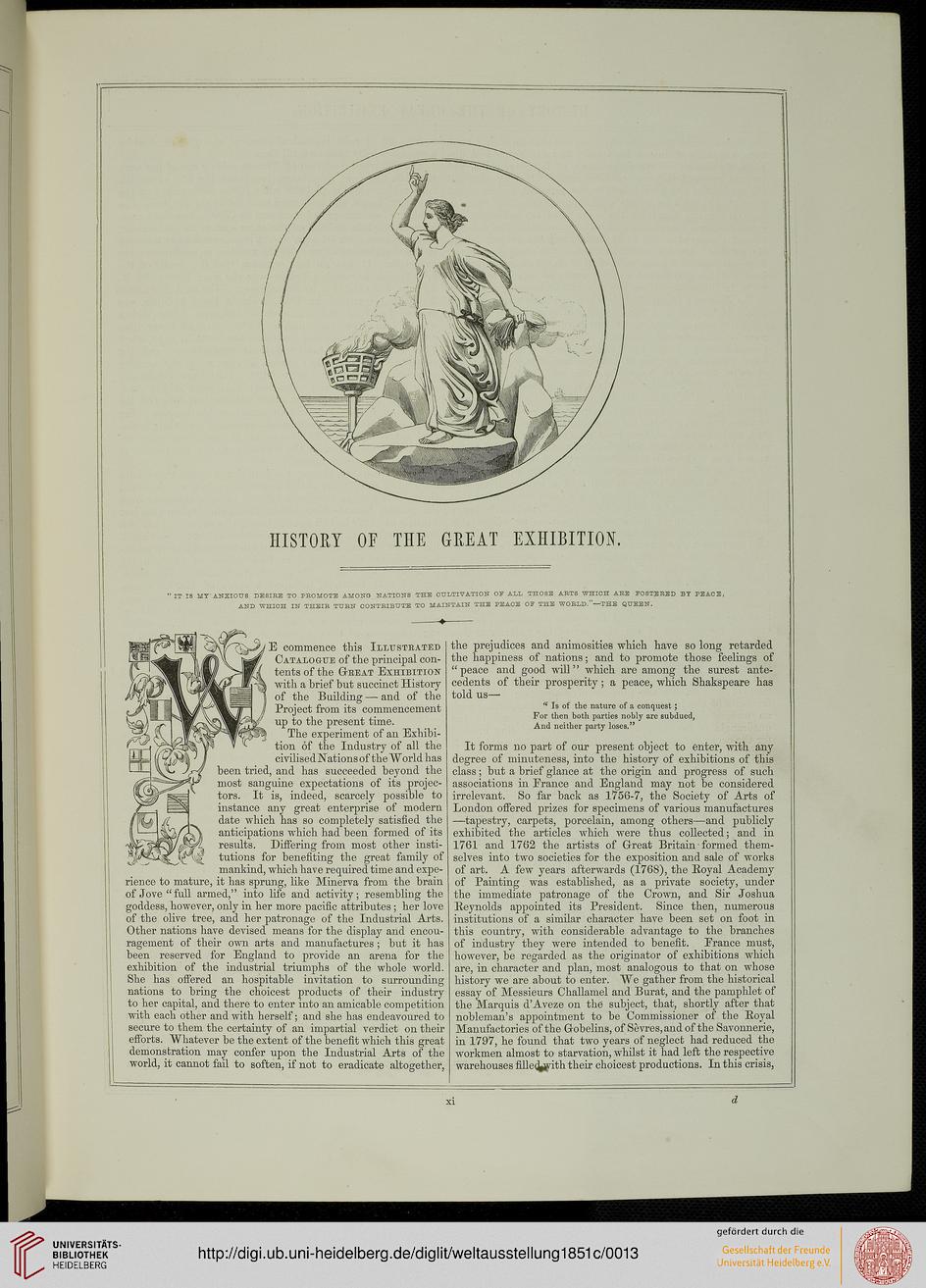 Information about OCR text
HISTORY OF THE GREAT EXHIBITION.

'IT 13 MI" ANXIOUS DESIRE TO PROMOTE AMONG NATIONS THE CULTIVATION OP ALL THOSE ARTS WHICH ARE FOSTERED BY PEACE,
AND WHICH IN THEIR TURN CONTRIBUTE TO MAINTAIN THE PEACE OB THE WORLD."—THE QUEEN.

'E commence this Iletjstbated
Catalogue of the principal con-
tents of the Gteeat Exhibition
with a brief hut succinct History
of the Building — and of the
Project from its commencement
up to the present time.

The experiment of an Exhibi-
tion of the Industry of all the
civilised Nations of the World has
been tried, and has succeeded beyond the
most sanguine expectations of its projec-
tors. It is, indeed, scarcely possible to
instance any great enterprise of modern
date which has so completely satisfied the
anticipations which had been formed of its
results. Differing from most other insti-
tutions for benefiting the great family of
mankind, which have required time and expe-
rience to mature, it has sprung, like Minerva from the brain
of Jove "full armed," into life and activity; resembling the
goddess, however, only in her more pacific attributes ; her love
of the olive tree, and her patronage of the Industrial Arts.
Other nations have devised means for the display and encou-
ragement of their own arts and manufactures; but it has
been reserved for England to provide an arena for the
exhibition of the industrial triumphs of the whole world.
She has offered an hospitable invitation to surrounding
nations to bring the choicest products of their industry
to her capital, and there to enter into an amicable competition
with each other and with herself; and she has endeavoured to
secure to them the certainty of an impartial verdict on their
efforts. Whatever be the extent of the benefit which this great
demonstration may confer upon the Industrial Arts of the
world, it cannot fail to soften, if not to eradicate altogether,

the prejudices and animosities which have so long retarded
the happiness of nations; and to promote those feelings of
"peace and good will" which are among the surest ante-
cedents of their prosperity; a peace, which Shakspeare has
told us—

" Is of the nature of a conquest ;
For then hoth parties nobly are subdued,
And neither party loses."

It forms no part of our present object to enter, with any
degree of minuteness, into the history of exhibitions of this
class; but a brief glance at the origin and progress of such
associations in Erance and England may not be considered
irrelevant. So far back as 1756-7, the Society of Arts of
London offered prizes for specimens of various manufactures
—tapestry, carpets, porcelain, among others—and publicly
exhibited the articles which were thus collected; and in
1761 and 1762 the artists of Great Britain • formed them-
selves into two societies for the exposition and sale of works
of art. A few years afterwards (1768), the Eoyal Academy
of Painting was established, as a private society, under
the immediate patronage of the Crown, and Sir Joshua
Reynolds appointed its President. Since then, numerous
institutions of a similar character have been set on foot in
this country, with considerable advantage to the branches
of industry they were intended to benefit. Erance must,
however, be regarded as the originator of exhibitions which
are, in character and plan, most analogous to that on whose
history we are about to enter. We gather from the historical
essay of Messieurs Challamel and Burat, and the pamphlet of
the Marquis d'Aveze on the subject, that, shortly after that
nobleman's appointment to be Commissioner of the Eoyal
Manufactories of the Grobelins, of Sevres, and of the Savonnerie,
in 1797, he found that two years of neglecb had reduced the
workmen almost to starvation, whilst it had left the respective
warehouses filledjgrith their choicest productions. In this crisis,