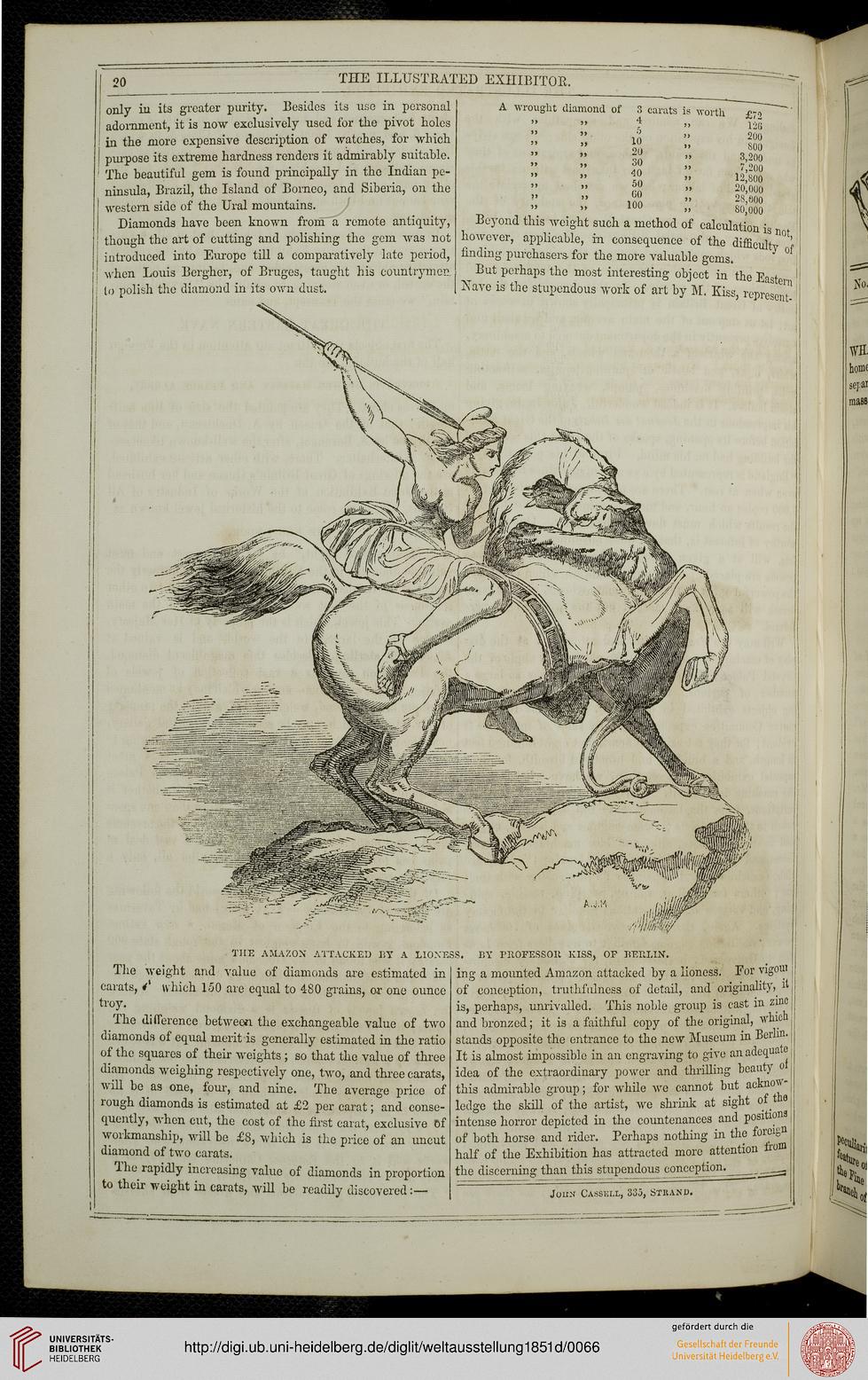 only iu its greater purity. Besides its use in personal
adornment, it is now exclusively used for the pivot holes
in the more expensive description of watches, for which
purpose its extreme hardness renders it admirably suitable.
The beautiful gem is found principally in the Indian pe-
ninsula, Brazil, the Island of Borneo, and Siberia, on the
western side of the Ural mountains.

Diamonds have been known from a remote antiquity,
though the art of cutting and polishing the gem was not
introduced into Europe till a comparatively late period,
when Louis Bergher, of Bruges, taught his countrymen,
to polish the diamond in its own dust.

A wrought diamond of

Beyond this weight such a method of calculation is
however, applicable, in consequence of the difficulty ^
finding purchasers for the more valuable gems.

But perhaps the most interesting object in the Eai
Nave is the stupendous work of art by M. Kiss, represent-

THE AMAZON ATTACKED BY A LIONESS. BY PROFESSOR KISS, OF BERLIN.

The weight and value of diamonds are estimated
carats, i% which 150 are equal to 480 grains, or one ounce
troy.

The difference between the exchangeable value of two
diamonds of equal merit is generally estimated in the ratio
of the squares of their weights ; so that the value of three
diamonds weighing respectively one, two, and three carats,
will be as one, four, and nine. The average price of
rough diamonds is estimated at £2 per carat; and conse-
quently, when cut, the cost of the first carat, exclusive of
workmanship, will be £8, which is the price of an uncut
diamond of two carats.

The rapidly increasing value of diamonds in proportion
to their weight in carats, will be readily discovered :—

ing a mounted Amazon attacked by a lioness. For vigoui
of conception, truthfulness of detail, and originality^ it
is, perhaps, unrivalled. This noble group is cast in zinc
and bronzed; it is a faithful copy of the original, which
stands opposite the entrance to the new Museum in Berlin.
It is almost impossible in an engraving to give an adequate
idea of the extraordinary power and thrilling beauty oi
this admirable group; for while we cannot but acknow-
ledge the skill of the artist, we shrink at sight of_ the
intense horror depicted in the countenances and positions
of both horse and rider. Perhaps nothing in the foreign
half of the Exhibition has attracted more attention from
the discerning than this stupendous conception