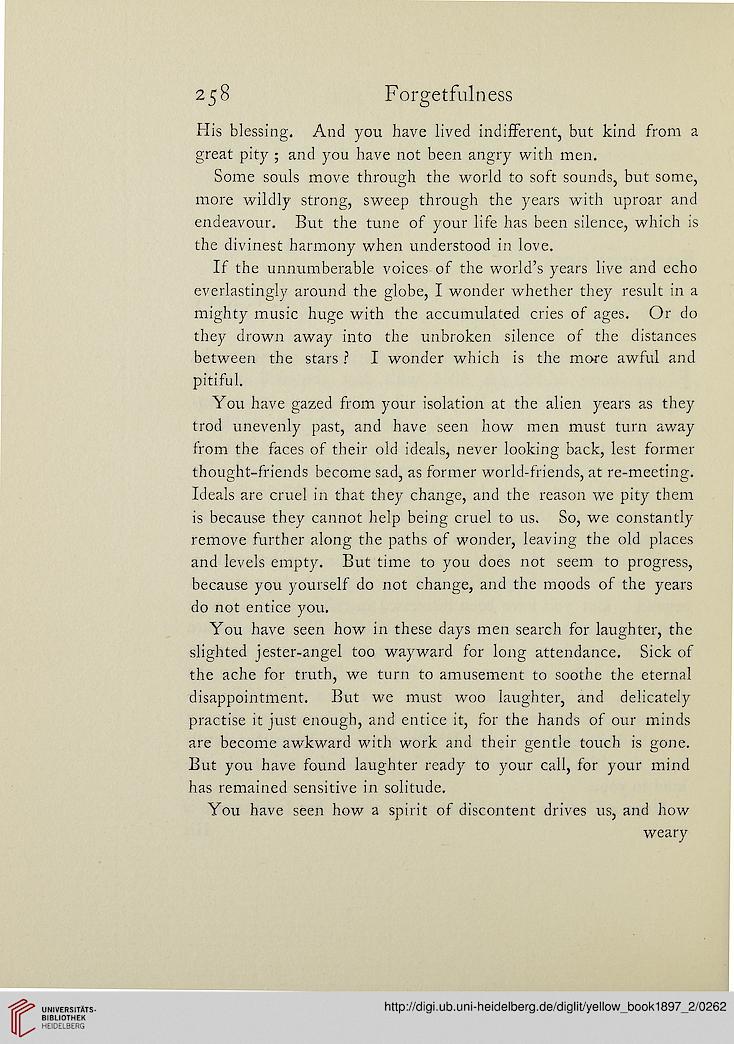 His blessing. And you have lived indifferent, but kind from a
great pity ; and you have not been angry with men.

Some souls move through the world to soft sounds, but some,
more wildly strong, sweep through the years with uproar and
endeavour. But the tune of your life has been silence, which is
the divinest harmony when understood in love.

If the unnumberable voices of the world’s years live and echo
everlastingly around the globe, I wonder whether they result in a
mighty music huge with the accumulated cries of ages. Or do
they drown away into the unbroken silence of the distances
between the stars ? I wonder which is the more awful and
pitiful.

You have gazed from your isolation at the alien years as they
trod unevenly past, and have seen how men must turn away
from the faces of their old ideals, never looking back, lest former
thought-friends become sad, as former world-friends, at re-meeting.
Ideals are cruel in that they change, and the reason we pity them
is because they cannot help being cruel to us. So, we constantly
remove further along the paths of wonder, leaving the old places
and levels empty. But time to you does not seem to progress,
because you yourself do not change, and the moods of the years
do not entice you.

You have seen how in these days men search for laughter, the
slighted jester-angel too wayward for long attendance. Sick of
the ache for truth, we turn to amusement to soothe the eternal
disappointment. But we must woo laughter, and delicately
practise it just enough, and entice it, for the hands of our minds
are become awkward with work and their gentle touch is gone.
But you have found laughter ready to your call, for your mind
has remained sensitive in solitude.

You have seen how a spirit of discontent drives us, and how