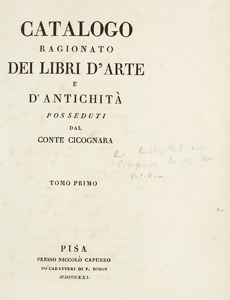 The private book collection of the Italian art collector, patron and art historiographer Leopoldo Cicognara (1767-1834) is one of the most remarkable private libraries founded in the early 19th century on archaeology, art and cultural history. The collection is a source of inestimable value for the historiography of art and culture in general.

Cicognara’s diverse and multiple book collection consisted of more than 5,000 titles of primarily Italian, Latin, English as well as French works from the 16th to the 19th century. Amongst these are not only biographies of artists and poets, iconographical studies, tractates on architecture and sculpture but also handbooks on drawing, architecture and painting as well as collection guides, writings on aesthetics, dictionaries on architecture, studies of costumes, emblematics, numismatics as well as literature on Greek and Roman Antiquity. In 1821 Cicognara published his two volume inventory of the entire collection with the title Catalogo ragionato dei libri d'arte e d'antichità posseduti dal Conte Cicognara (Pisa, 1821).

The private library was bought by the Vatican Library in 1824, where it is held until today as the “Fondo Cicognara”. In a collaborative effort launched in 1989 by the Biblioteca Apostolica Vaticana and the University of Illinois Library funded by the Samuel H. Kress Foundation the entire “Fondo Cicognara” was filmed and later published as a microfiche-edition.

Over 6,000 microfiches have been catalogued by Heidelberg University Library and are searchable in the local online catalogue HEIDI, the SWB (Union Catalog of the South West German Library Consortium) and via arthistoricum.net. All titles are also available via interlibrary loan.

In order to provide easy and unrestricted access to the Bibliotheca Cicognara, Heidelberg University Library is gradually digitizing all volumes from its collection and making them available online.

Heidelberg University Library is partner in the international cooperation "The Digital Cicognara Library: An Open-Access Collection of the Early Literature of the Arts"

The index of the ‚Catalogo ragionato dei libri d'arte e d’antichità’ (Pisa, 1821) compiled by Leopoldo Cicognara aims to help users easily navigate the vast collection. Here you can find the first digitized Cicognara volumes sorted by the subjects headings which the Italian count had chosen for his library.

If you are interested in a certain title from our collection, we will be glad to prioritise its digitizsation.

Further literature and information on Leopoldo Cicognara can also be found in our thematic portal with primary sources on the History of Art History.