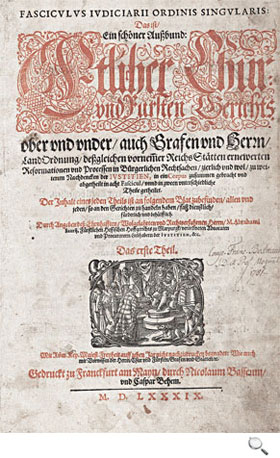 Based on a project that started in collaboration with the Heidelberg Academy of Sciences and Humanities, Forschungsstelle Deutsches Rechtswörterbuch and was supported by the Deutsche Forschungsgemeinschaft, Heidelberg University Library successively digitizes early modern period legal sources from the libraries holdings.

Among the sources are the works of famous legal scholars from the 16th up to the 18th century. Represented are important works by Christoph Besold, Benedikt Carpzov, Adrian Beier and Noe Meurer which are difficult to access for non-local academics and interested readers.

A printed edition of Sebastian Brant's “Richterlich Clagspiegel” (1536) is available, too. Already written in 1436 by the town clerk Conrad Heyden of Schwäbish Hall, this book is considered to be the oldest and most substantial compendium of Roman Law in German language. The first treatise contains comments on civil law and law of civil procedure, the second treatise ( “Ander Teil”) comments on criminal law and law of criminal procedure.

All digitized works are indexed in our online catalogue HEIDI.