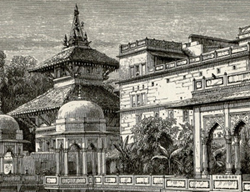 Among the more than 300,000 books of the CATS Library / Department of South Asia at the University of Heidelberg are several rare and precious volumes from the 18th to early 20th century. These are gradually being completely digitized and made available free of charge via the Internet.

The digitized works are recorded in Heidi, the University Library’s online catalogue as well as inter-regional online catalogues like the SWB, the union catalogue of the South West German Library Consortium.