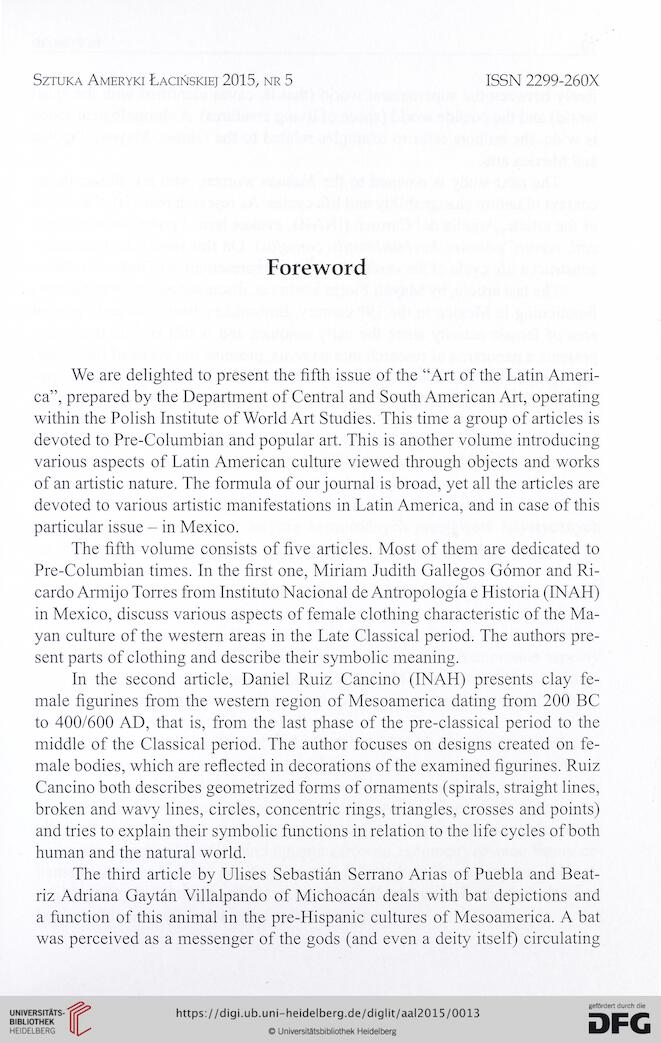 We are delighted to present the fifth issue of the “Art of the Latin Ameri-
ca”, prepared by the Department of Central and South American Art, operating
within the Polish Institute of World Art Studies. This time a group of articles is
devoted to Pre-Columbian and popular art. This is another volume introducing
various aspects of Latin American culture viewed through objects and works
of an artistic nature. The formula of our journal is broad, yet all the articles are
devoted to various artistic manifestations in Latin America, and in case of this
particular issue - in Mexico.
The fifth volume consists of five articles. Most of them are dedicated to
Pre-Columbian times. In the first one, Miriam Judith Gallegos Gómor and Ri-
cardo Armijo Torres from Instituto Nacional de Antropología e Historia (INAH)
in Mexico, discuss various aspects of female clothing characteristic of the Ma-
yan culture of the western areas in the Late Classical period. The authors pre-
sent parts of clothing and describe their symbolic meaning.
In the second article, Daniel Ruiz Cancino (INAH) presents clay fe-
male figurines from the western region of Mesoamerica dating from 200 BC
to 400/600 AD, that is, from the last phase of the pre-classical period to the
middle of the Classical period. The author focuses on designs created on fe-
male bodies, which are reflected in decorations of the examined figurines. Ruiz
Cancino both describes geometrized forms of ornaments (spirals, straight lines,
broken and wavy lines, circles, concentric rings, triangles, crosses and points)
and tries to explain their symbolic functions in relation to the life cycles of both
human and the natural world.
The third article by Ulises Sebastián Serrano Arias of Puebla and Beat-
riz Adriana Gaytan Villalpando of Michoacan deals with bat depictions and
a function of this animal in the pre-Hispanic cultures of Mesoamerica. A bat
was perceived as a messenger of the gods (and even a deity itself) circulating